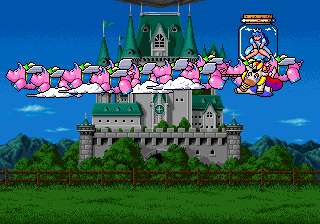 Once you have inserted your coin(s) into the cabinet of Taito Corporation's 1989 platform arcade game Don Doko Don, and pressed either Start Button, you will be treated to the opening cutscene shown above, in which the blue-haired princess of Marry Land is kidnapped by a herd of flying pigs and Bob and Jim chase after them; the game shall then proceed to the first round, which features a Kinokong, a Pink Kinokon and a Brown Kinokon. One (two, if there are two players) magical door(s) will then materialize upon the left (and right) sides of the screen, and Bob (and Jim) will emerge from them as the enemies start moving - and they must tap the enemies with their hammers to stun them, then pick them up (if they recover from their stuns while in your dwarf's hand, they shall kill him) and throw them at the walls to kill them; they will leave bonus items behind which can be collected for extra points, and some bonus items will also appear in the rounds by themselves. Once you have killed all the enemies you will proceed on to the next round - and some rounds, including the first one, have secret keys in them that can be revealed by making your dwarf swing his hammer at its location (it will glow orange and once you have hit it enough times it will (if it is in mid-air) fall down and land upon your dwarf causing a pair of double doors to appear and open up somewhere on the screen. Once either dwarf enters them, they'll both fall down a long shaft, to a secret room; once you've killed all the enemies in it, a chest will fall down from the top of the screen, which the dwarves can smash open with their hammers, to reveal one instance of every 100-point bonus item and a 200-point crystal ball. If they've collected all four crystal balls by the time they kill all the enemies in the last secret room, they shall learn the password to warp to Round 51 - and killing all the enemies in a secret room also causes the dwarves to warp over five regular rounds which minimizes the amount of time it takes to win the first fifty. But if they've not collected all four crystal balls by the last secret room the game will end after Round 50.