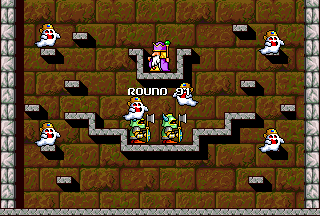 This round contains one Bishop, two Chaoses and six unnamed ghost-like enemies; a Marmalade Jar will also appear at some point here, which can be collected for a power increase. It is also worth noting that this world is comprised of eleven rounds, as opposed to the usual ten - and has an extra boss. 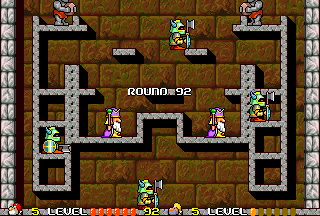 This round contains two Golems, two Bishops, and two Chaoses; a Gray Book will also appear at some point, which can be collected for a stun and kill on every enemy. Another enormous spiked ball will also lower itself down from the top of the screen and swing from left to right like a clock's pendulum. 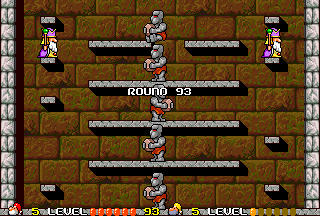 This round contains five Golems and two Bishops; no powerups will appear on this round, and you must also time your jumps carefully to avoid falling. 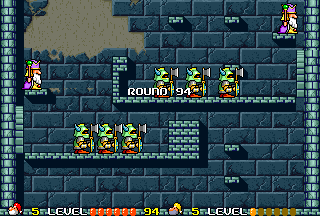 This round contains two Bishops and six Chaoses; a second Marmalade Jar shall also appear at some point, which can be collected for another power increase. Two Worms will also emerge from the holes in the walls on the right and left sides of the screen to attack by sticking their tongues out at Bob and Jim in an attempt to eat them - and remember that even though they cannot be killed, they can be jumped on and ridden and you will have to do it here in order to jump up to the platforms on which the Bishops are standing (as they are too high for Bob and Jim to jump up to without any footholds). 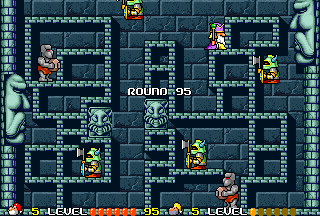 This round contains two Golems, one Bishop and four Chaoses; a Blue Hammer will also appear at some point which can be collected for the ability to throw it at the enemies. The two carved faces, on the right and left sides of the screen, will also occasionally wake up and fire lasers across the screen before going back to sleep again - and, the two stone blocks can be pushed over the edges of their platforms by Bob and Jim (and kill any enemy they land on, but you should remember that the Chaoses can do the same to them). It's also worth noting that there are only six more rounds left to go now. 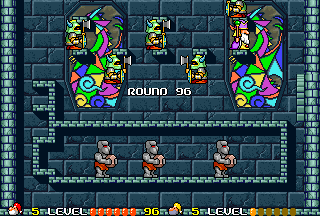 This round contains three Golems, one Bishop and five Chaoses; again, no powerups will appear on this round, and a third Worm will also emerge from the hole in the wall on the right side of the screen and stick his tongue out at Bob and Jim in an attempt to eat them. You will again have to jump on and ride this Worm to jump up to the platform on which the Bishop is standing - for it is, again, too high for Bob and Jim to jump up to, without any footholds. 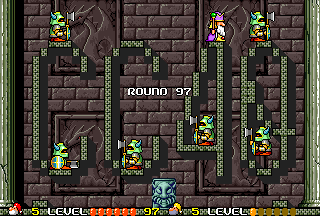 This round contains one Bishop and six Chaoses; a third Marmalade Jar and a King shall also appear at some point, which can get collected for a third power increase and a temporary freeze on every enemy respectively. The stone block can also be pushed and jumped on by Bob and Jim, as the third of the four platforms (which spell out "CC40") is too high for them to jump up to - and if Bob and Jim drop down onto the right side of the fourth platform (where the diagonal line through the "0" sticks out), they will be stuck there. Thankfully, this is the last time something like this can happen in the game. 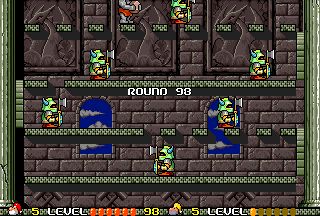 This round contains one Golem and six Chaoses; once again, no powerups will appear on this round, and three more Worms will also emerge from the hole in the wall on the right and left sides of the screen, to stick their tongues out at Bob and Jim in an attempt to eat them. You will once again have to jump on and ride them to reach the second to seventh (in reversed order), eighth and ninth, and tenth to eighteenth (in reversed order again) platforms. 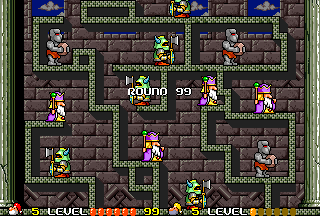 This round contains three Golems, four Bishops, and five Chaoses; a Brown Book, Water Jar and fourth Marmalade Jar will also appear at some point, which can be collected for a stun on every enemy, a speed increase, and a fourth power increase respectively. Now for this game's penultimate round. 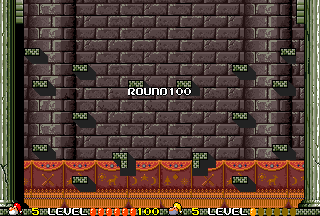 This round initially does not appear to contain any enemies; however, the illusion will soon be shattered when the enormous pink dragon boss from the end of the fifth world comes down from the top of the screen (see Round 50 for a description). Once you have defeated him and smashed the jar which contains the blue-haired princess to set her free, the screen will fade in to an upwards-scrolling shot of the sky, as Bob and Jim rise through the air and off the top of the screen - and it will eventually stop in a darkened room as the text "ROUND 101" appears on the screen (this is the game's last round). 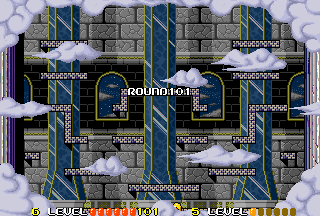 Once Bob and Jim drop down to the ground from the top of the screen an enormous flying pig (who is dressed up like a king and has a silver ring in his nose) will materialize in the centre of the screen and start flying around while throwing pink balls down at Bob and Jim (which will transform into smaller pigs who are dressed like Germans, when they land); you will have to stun the smaller pigs by tapping them with your hammer, pick them up and throw them at the large pig to damage him. Once you've thrown ten smaller pigs at the large pig, he will turn red, as if he had been burned, and explode, then shrink down, and transform into a human as he drops down to the ground - and the game shall now proceed onward to its "reversed" ending sequence: 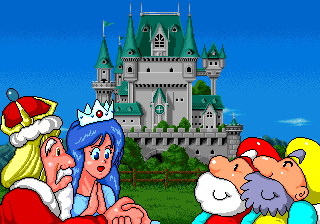 OH I FEEL SO RELIEVED.
OUR COUNTRY HAS RESTORED
PEACE AGAIN. THANK YOU. 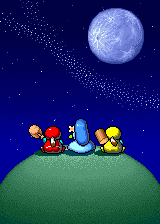 The screen will then cut to the shot of Bob, the princess and Jim sitting on a hill staring at the sky with their backs to the camera from the normal ending sequence on its left side, while the game's credits start rolling upon the right side (in the "normal" ending, the enemies and their names were displayed):

After the credits have finished, the text of "PRESENTED BY TAITO" (much like the normal ending sequence, the "A" is represented by their then-current triangular logo) shall appear upon the screen, except this time it has the additional text of "TAITO CORPORATION" below it; the text "GAME OVER" will then appear on the screen, and the game shall go into high-score mode. Your scores shall most likely be the two highest ones on the cabinet to date, so you should enter your initials at the top of the table with pride regardless of which way round they are positioned - and once you have done so the game will go back into attract mode. It is also worth noting that if you press the Attack Button three times during a gameplay demonstration in the attract mode, a picture of a bear doing a handstand on a tree stump will appear in the bottom-right corner of the screen; it serves no purpose, and is only there for fun.