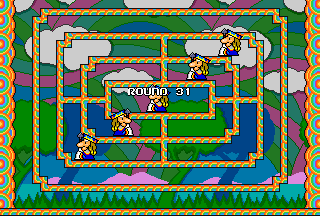 This round contains five Kings of Kards; they shall use their spears to generate an infinite amount of Kards. A P-Ball and Marmalade Jar will also appear at some point, which can be collected for a temporary power increase, and permanent (unless you collect a Green Spotted Apple or die) power increase respectively - and it's also worth noting that once you've cleared this round, the screen will scroll upwards to the next one (like it did in the second world). 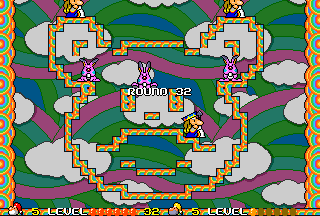 This round contains five Kings of Kards and three Rabits (making their first appearance since the first world); a Water Jar will also appear at some point, which can be collected for a speed increase. If you jump while swinging your hammer, at the left side of the bear's head (that the platforms are arranged to look like) it will also reveal the location of a fifth hidden key - and once you have hit it enough times, it will fall down and land on your dwarf, causing a pair of double doors to open up in the centre of the screen. Once either dwarf enters them, they will both fall down a long shaft to the fourth secret room. 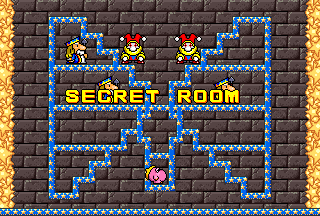 The fourth secret room contains three Kings of Kards, two Pierons and one Minimam; the Pierons shall roll balls at Bob and Jim which will explode into two more Pierons, and the Minimam shall split into two when they tap them with their hammers. The two smaller Minimams will also split into two when Bob and Jim tap them with their hammers - and once you have cleared this room, a chest shall fall down from the top of the screen which Bob and Jim can smash open with their hammers to reveal a single instance of every 100-point bonus item and a 200-point crystal ball (which is coloured turquoise, instead of red, purple or green). Both of the dwarves shall then, yet again, get warped forward five regular rounds to further minimize their playing time. 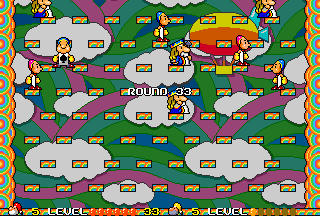 This round contains four Kings of Kards and five Kards; a Brown Hammer, Marmalade Jar and Water Jar will also appear at some point, the second and third of which can be collected for a second power increase and speed increase respectively (remember the first one does not seem to have any effect). 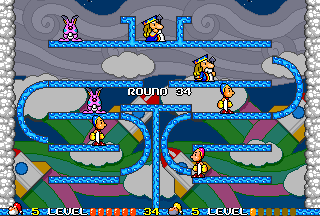 This round contains two Kings of Kards, three Kards and two Rabits; another P-Ball and a third Marmalade Jar will also appear at some point, which can be collected for another temporary power increase and a third speed increase respectively. Although neither the dwarves nor the enemies may stand on the curved platforms, when either of the dwarves throws a stunned enemy they have picked up, they shall slide down them on their flight into either wall. 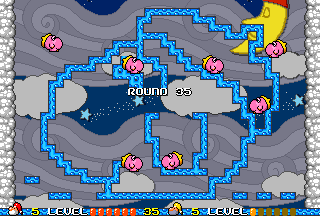 This round contains five Minimams; no powerups will appear at any point on this round, and the platforms are also arranged to look like a sixth Minimam. 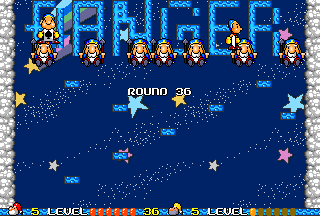 This round contains seven Kings of Kards and two Kards; a Gray Hammer will also appear at some point here, which can be collected for an increase to maximum power. The first six platforms at the top of the screen also spell "DANGER", possibly because you must time all jumps carefully to reach them. 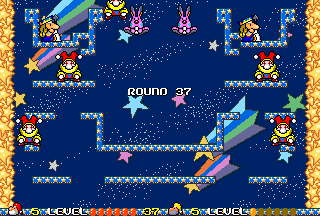 This round contains two Kings of Kards, five Pierons and two Rabits; again, no powerups will appear at any point on this round, and even though it is not shown in the screenshot above, there is also a cross-shaped platform in the centre of the screen which initially rotates in an anticlockwise direction but it will occasionally reverse its direction to clockwise and cause both the dwarves and enemies to repeatedly bounce off it (if they should try to jump onto it). 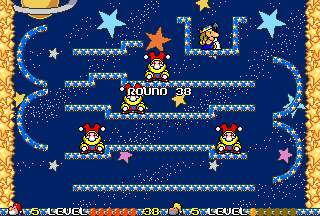 This round contains one King of Kards and four Pierons; a fourth Marmalade Jar will also appear at some time, which can be collected for a fourth power increase. Again, neither the dwarves nor their enemies may stand on the curved platforms, but when either of the dwarves throws a stunned enemy they have picked up, they shall slide down them on their flight into either wall - and the next round also features one of the first enemies you met in the game. 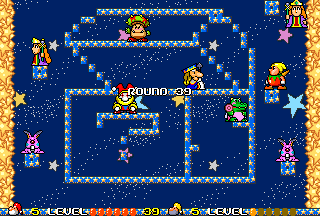 This round contains one Kinokong, one Orange Pigumn, two Rabits, one Eatong, two Hiruda, one King of Kards, and one Pieron; a fifth Marmalade Jar will also appear at some point which can be collected for a fifth power increase. The platforms also happen to be arranged to look like a treasure chest. 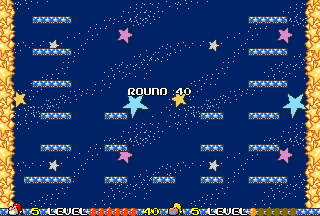 This round initially does not appear to contain any enemies; however, the illusion will soon be shattered as the game's fourth boss, who is an enormous magician, comes up into view from the bottom of the screen, and a gold-tipped silver baton emerges from his hands. He shall then start flying around at the top of the screen, while twirling his baton threateningly at Bob and Jim (for it will kill them if it hits them) - and an infinite amount of pink balloons will also come up into view from the bottom of the screen and burst as an infinite amount of Rabits emerge from them as he's doing so. You will have to tap the Rabits with your hammer to stun them, then pick them up, and throw them at the magician to damage him; once you have thrown ten Rabits at him, he will explode, and you shall receive 5000 more points and go on to World 5. The harder version for this round also, again, features invisible platforms.