You control Mario (originally named "Jumpman") with the direction pad. Press left or right to make him walk along the girders, and press up or down to make him climb up or down the ladders. Mario can only climb all the way up unbroken ladders. Press the

button to make Mario jump. By pressing the

button alone, Mario will jump straight up. By pressing the

button along with left or right, Mario will do a running jump in that direction. Mario loses a life if he touches a barrel, spring, fireball, or fox fire; or if he falls a distance greater than his own height.

This is Mario's damsel in distress. In most stages, she awaits your rescue at the top of the screen, while in the rivet stage she sits helpless and out of reach. Bonus points are awarded to you every time you successfully rescue Pauline. The bonus points count down from the beginning of each stage. If the bonus reaches zero before Mario rescues Pauline, Mario loses one life and must start the round over. 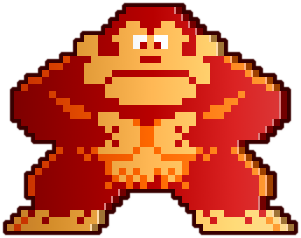 The title antagonist himself and the king of video simians, Donkey Kong is an ever present threat to Mario's rescue of Pauline. Determined to slow Mario down, he sends barrels, springs, and fire after the hero while he pounds on his chest and stomps on the floor. Though he does nothing to threaten Mario directly, touching Donkey Kong is lethal.

If Mario jumps and grabs a Hammer, he will have the ability to smash enemies with the Hammer for a limited period of time. However, while holding one, Mario loses the ability to jump or climb ladders. Mario is also not invulnerable while holding the hammer and can still be killed if an object sneaks past the head of the Hammer. The Hammer stays active for roughly 11 seconds, and swings twice every second.

These inanimate objects appear on the Ramp Stage. Barrels and Beams roll down the Ramp and will randomly choose to fall down a ladder, or to drop off the end of a ramp. Mario must jump over them to safety, and avoid having them drop on his head from above. The Beams are no different from the Barrels, except that Donkey Kong likes to throw the beams straight down more often, and the Beams become Fireballs upon contact with the burning oil canister.

Springs bounce along the top of the Elevator Stage and fall off the ledge to varying distances. Mario's best strategy is to let the Springs bounce safely over his head at the top of the Elevator Stage before attempting to rescue Pauline. The Cement Pies appear on the Conveyor Belt (A.K.A Pie Factory) Stage. They are relatively easy to avoid since they just move along with the conveyor. They can be smashed by the hammer for bonus points, but do not try to jump over them when they are moving in the same direction as Mario.

Fireballs appear on the Ramp, Conveyor Belt, and Elevator Stages, while Firefoxes appear on the Rivet Stage. These wispy flames are slow but very unpredictable. If they continue in one direction, it is possible for Mario to jump over them, but they change direction so frequently that it's best not to try. Fireballs can climb up broken ladders, but Firefoxes cannot cross the gaps created by Mario when he pulls out the yellow rivets in the Rivet Stage.

On every stage except the Ramp Stage, some of Pauline's possessions are scattered about which you can retrieve for extra points. For every Purse, Hat, and Umbrella that you manage to collect, you will receive 300 points on Level 1, 500 points on Level 2, and 800 points every level thereafter. Since you typically only get one extra life in the game (at 7000 points by default) these are only worth going out of your way to collect early on the game before you have earned the extra life.

In the American version of the arcade (but not the Japanese version) and in several computer ports of the game, the order of the stages changes as you rise in level for the first five levels. Refer to the chart to determine which stage you will encounter and when. A Barrel represents the Ramp Stage, a Cement Pie represents the Conveyor Belt Stage, a Spring represents the Elevator Stage, and the Firefox represents the Rivet Stage.

In the Japanese version of the arcade, all levels use the Level 3 structure.