Stanley's job is to defend the greenhouse that Donkey Kong has invaded. He does this with his trusty bug spray. When Stanley pumps his spray can, the spray travels a certain distance before dissipating so it's not useful against targets that are far away. Stanley primarily uses his bug spray to zap bugs or to make Donkey Kong scoot up the vines that he holds on to. In order to complete each stage, Stanley's goal is to either push Donkey Kong all the way up the vine using bugspray, or defeat every insect present in that stage. There are many ways for Stanley to lose a life, including touching an insect, getting shot by any of the bee stingers, running out of time, or allowing Donkey Kong to slip off the bottom of the vine. 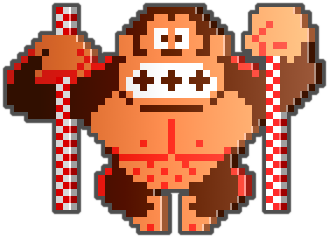 Nintendo's favorite simian seems to have been working out a little bit compared to his previous appearances. Donkey Kong attempts to keep himself above harm's way by hanging on to two vines that descend from the greenhouse ceiling. If left alone, Donkey Kong slips down the vines little by little, hoping to land on Stanley by surprise. Occasionally, he will reach over to one of the two beehives along side him and tap them in order to send more bees after Stanley. In the yellow greenhouse stages, he even grabs coconuts from time to time and lobs them at Stanley's head. Starting in round 15 (except on the NES), he will throw coconuts at you regardless of the stage.

One time for every one of Stanley's lives, a more powerful bug spray will be perched on Donkey Kong's right vine. When Stanley pushes Donkey Kong high enough so that his hand is touching the spray, the spray falls to the ground, at which time Stanley can pick it up. The Super Spray lasts for a number of seconds, and continues with Stanley to the next stage until the full time runs out. When this spray is activated, Donkey Kong is forced up the vines much faster, and Queen Bees die in one hit. It will not be replenished after it runs out until Stanley loses a life, so it's not a good idea to plan your strategy around its use.

These bugs are the primary attack force of the hive. Stanley starts the game squaring off against the Beespies as they swoop down and try to steal Stanley's vegetables. Starting in round 12 (round 9 on the NES), the hive switches to their faster and more aggressive soldier, the Buzzbees. Buzzbees strike at Stanley more directly than Beespies. Either bee may or may not be accompanying a Queen Bee, but they are dangerous either way.

Starting in round 3, the Queen Bees of the hive will, from time to time, enter the fray surrounded by their royal escorts. One shot isn't enough to do them in, it simply changes them from red to blue. Even after you shoot them a second time, the threat isn't over. When hit by a third shot they split up in to 4 tiny projectiles that can kill you if any of them hit you. You are only 100% safe directly beneath them when they die (you can avoid them if standing at an angle to the Queen Bee, but this is risky).

Starting in round 6, the Buttiflies escape from the hive. They fly down along the side of the screen until they are even with Stanley, pause for a brief moment, and then charge across the screen in an attempt to collide with him. They disappear after round 16 (round 10 on the NES,) only to be replaced with Beetles in round 18 (round 12 on the NES,) who are bigger and a bit harder to dodge. Beetles do not pause as Buttiflies do, and attack immediately.

The Moth is the mercenary of the bee hive, employed from round 24 (round 15 on the NES) and on. They move erratically, so it's slightly difficult to predict where they are going to end up. They will occasionally attack Stanley, or they will swoop down for his vegetables. Don't let them distract you from your efforts to force Donkey Kong up the vine, but don't get in their way either, or let them fly away with your plants.

This worm likes to play interference. In the blue and gray greenhouse stages, he crawls down to the platforms from the plants along the side of the screen. Once he reaches the platform, he will wiggle back and forth and make a nuisance of himself. He can not be killed by regular bug spray, but he is quite allergic to it, and spraying him causes him to stop in his tracks until he finishes coughing. Stanley may safely touch a Creepy stunned in this manner. Creepy can be persuaded to climb back up the plant for a while if you blast him with spray before he reaches the platforms. In yellow greenhouse stages, three or more Creepies will slide along the vines below Donkey Kong and try to get in the way of your bug spray. If you hit one, not only with it absorb the spray, but you'll have to wait for it to finish coughing before he will move on and allow you to shoot Kong. They can be killed by super spray.

Not present in the NES version. After a bee successfully steals one of your vegetables, they turn in to a Beebomb. Beebombs circle around a few times near the hive that they came from, and then immediately dive bomb towards Stanley. They are incredibly fast when diving towards you, but due to their direct attack nature, they are easy to defeat as long as you keep your eyes on them and time a blast of bug spray just as they are about to hit you.

Not present in the NES version. These creatures appear when the bonus timer runs out. When the timer reaches zero, two of these appear on either side of the screen. They are impervious to bug spray. When they reach the vines, they eat the vine from the bottom up to the ceiling. If they eat the section of vine that Donkey Kong is holding on to, Donkey Kong falls down and Stanley loses a life just as if he had allowed Donkey Kong to drop off the vine himself.