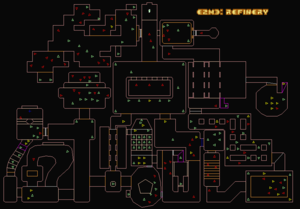 A refinery, which is known to have leakage onto the floors. 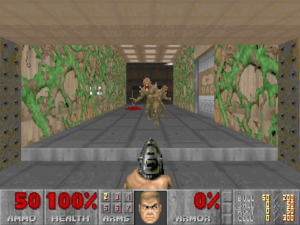 You are attacked immediately. Start moving!

The starting location is simple. Two imps map appear at the start, and there are a few cacodemons roaming in the caged area behind them. The door to the right contains starting supplies (but plenty of monsters), and the rest of the map is located behind the cage.

Behind the cage, there are two corridors. The left path is provides access to the blue key door, and also provides a safe path that does not require crossing nukage (provided you know the secret passages). The right path is more direct.

Once you get the shotgun, head down the side corridor and go straight down. You should see a nukage pit which you can jump into. Climb up the stairs to collect the plasma gun, which will make the rest of the map easy. In the room past the stairs, grab the blue key and head to the blue key door.

Head through the door. After a short corridor, you should reach a room with monsters, followed by a darkened maze filled with a few enemies. The exit is located across the nukage pit.

The door to the right of the start contains many supplies, which are guarded by enemies. In particular, you can get:

There are six secrets on this map:

There are no changes to the map layout in deathmatch.

Most of the action will appear in the central area, with three branches heading to the southwest (for the plasma gun), the north (for the various supplies) or to the east, where there is a supercharge.