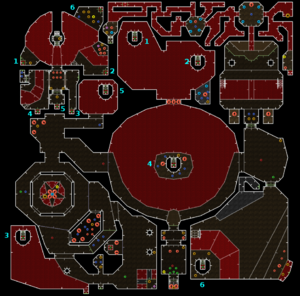 Map of Limbo (with teleporter annotations)

This level is known for large sections where the ground can easily damage you. However, they are easily recognized by a red, blood-coloured ground. It is also norable for a series of teleports that are also needed to complete the level.

Before you can use the teleports, or even unlock them, you need the blue key found to the left of the map.

At the start, there are a few sergents hiding behind the wall (and on hard, two more that are attacking). Kill them for the shotgun, and be sure to collect the ammo. When you enter the main room, the door behind the start opens, releasing cacodemons and revealing a backpack.

Head to the left exit and turn towards the south. There are two paths to reach the blue key from the circular room. The east path leads past two demons, while the southern path leads past an alcove containing green armor, and ammo. In either path, the blue key is located at the south-east corner. While grabbing the key lowers the bridges into the surrounding nukage moat, it is not much of an obstacle if you run across it.

There is also two switches on the southern wall to the left. One switch opens a secret (see below), while the other raises a bridge later in the map. This bridge is helpful but not required.

Return to the main central room, and head east. Take a left turn to see a room separated by the chasm. You can cross the bridge if you raised it, or take the stairs on either side. However, it's a one-way path. Enter the pit on the north, and grab one radiation suit.

The teleports in this section will return you to near the blue key area. Navigate the maze, heading to the west to reach the second room. Continue west, but turn south when you see the teleporter, to reach the red key. You can optionally open the door to the south and open all teleport doors.