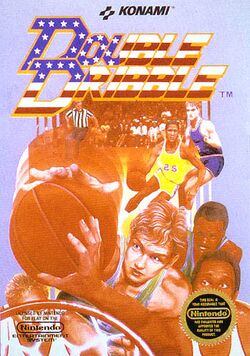 This guide is for the home version release. For the arcade release, see Double Dribble.

When Konami brought Double Dribble home for the first time, they released the game on the Famicom Disk System in Japan under the name Exciting Basket (エキサイティング バスケット, Exciting Basket?), to make it part of Konami's Exciting Sports series. The game featured background music that would not be included in the American release of the game, which was released on the NES in September 1987. These home versions introduced four different teams (Boston Frogs, New York Eagles, Chicago Ox, L.A. Breakers), three levels of single-play difficulty, and four different choices of quarter lengths. Double Dribble was among the first games to feature cut scenes, which depicted a mid-air player completing a slam dunk, and one of the first to use computer generated speech, though in a limited quantity (such as announcing the game title, the game's beginning jump ball, and some foul calls). 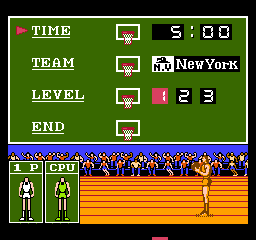 Before the game begins, you have control over several settings, including how many minutes each period lasts, what team you would like to use, and the level of difficulty. 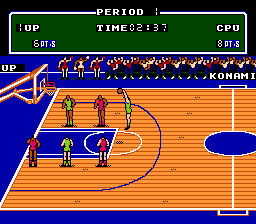 Gameplay in the home conversions is nearly identical to the arcade version except for the obvious omission of the dribble button. Dribbling occurs automatically, and does not stop until the ball is passed or shot. Thus it is impossible to get a double dribble violation, despite the irony of the game's title. All the other violations are still possible. While the arcade has five different slam dunk "movies", the home versions only have three: the Dunk Shot, the Back Dunk Shot, and the One-Hand Dunk Shot.

Defense is considerably more difficult than offense, so it is important to build up your shooting skills to keep the score high, and take away a few opportunities from the computer to succeed. Good use of passing is a must at higher levels to avoid having the ball stolen from you. Worry less about getting dramatic 3 pointers or being presented with a dunk movie, and focus on solid scoring opportunities. At the same time, it's a good idea to know where the 3-pointer sweet spots are on the court in case you need to close the gap in score between you and your opponent.