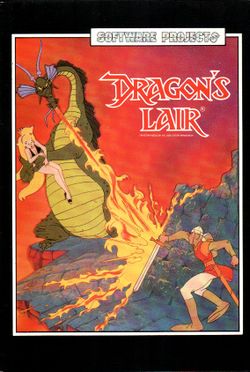 The home computer versions of Dragon's Lair released for the Commodore 64 and ZX Spectrum are based on the arcade version. However, these versions used sprites to represent gameplay rather than using an equivalent laserdisc due to hardware limitations, and mixed the original arcade gameplay with platforming or more traditional action sequences.

These ports only include a small portion of the scenes from the arcade version, and introduces original scenes as well.

The first scene in the game is the falling disk scene, where you jump onto the disk before the downward descent.

Stand in the middle of the disk. When a ghostly figure appears in one of the corners, run towards it to avoid being pushed off the side by wind.

After about 6-8 attempts to push you off, the exit should be visible to the top-right. If you miss the exit, you will have another chance to reach it, but if you don't make it again, you'll eventually hit the cavern floor.

Whenever you see a large hand trying to grab you, swing your sword. In all other cases:

You start at the bottom right, and need to reach the top-left section. Jump across the first two platforms, and grab the rope. Push left once you are close to the next rope.

There is a time limit on each floor, marked by the progression of flames.

Magical weapons will fly out and try to kill you.

You are on a set of platforms, and need to reach the top-most one. Jump across each platform, kill any rat that is directly blocking your path. The route should be obvious, but takes you across all platforms on-screen.

Remaining too long on a platform will cause it to collapse with you on it.

This is a small room with tentacles approaching from the floor and ceiling. Unless specified otherwise, chop all ceiling tentacles.

As with the first disk, you will jump onto it. Stand in the center, and as soon as a face appears, run towards it to avoid being pushed off the disk.

In the Commodore 64 and ZX Spectrum versions, the gusts of wind last much longer.

In a small chessboard room, the knight will appear and randomly teleport around the room. His attacks are in straight lines, but are known to bounce or turn.

To defeat him, you need to approach him as soon as he appears. While he can be destroyed in one hit, he cannot be injured once he turns black.

When you defeat him, head to the exit before the floor becomes hazardous.

Run up to the thorns on the right. When Singe makes his attack, he will hit the thorns instead of you, causing them to burn.

You can also collect some gold hidden under one of the rocks, although Singe will have to blast them first.

Once the path is cleared, collect the sword, and run onto the bridge.