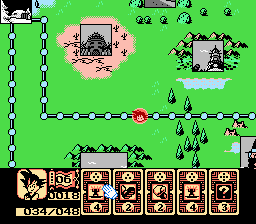 The Map mode occurs when Goku travels between Adventure mode sites. Traveling from one location to another resembles a board game. A certain number of spaces must be crossed to reach a destination. The number of spaces that you can travel at a time is determined by the number of stars in the Dragon Ball of the card you select. After each card is used, you must choose one of five face down cards and discover the outcome of your choice.

Select a card
The number of star in the Dragon Ball of the card you select determines how many spaces you may travel between destinations.
Select a direction
As soon as you begin moving in one direction, you are locked into that choice. You may not reverse directions, so choose the direction you want to move in carefully.
Select a face down card
One of four (later five) characters will appear on the face of the card you chose. The outcome of that choice is played out before the next turn begins. In the case of some characters, the outcome is random. See below.

Fortuneteller Baba
One of four outcomes is chosen at random:

Piccolo
If you uncover Piccolo's face, you are immediately attacked, and transferred to Combat mode.

Dragon God Shenron
One of four outcomes is chosen at random:

Later on in the game, after you encounter him, you can also uncover Korin, who will immediately restore all of your health.