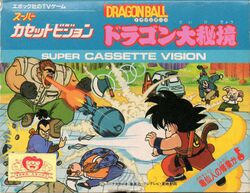 Dragon Ball: Dragon Daihikyou (ドラゴンボール ドラゴン大秘境, Doragon Bōru: Dragon Daihikyō?, Dragon Ball: Dragon's Great Exploration) is the first Dragon Ball video game ever produced. It was released by Epoch, making it the only game not to feature any kind of involvement with Bandai or the subsequent Namco Bandai. The game is an overhead shoot'em up that allows players to take on the role of Son Goku, who rides on the Nimbus while firing Ki blasts and swatting at enemies with his Power Pole.