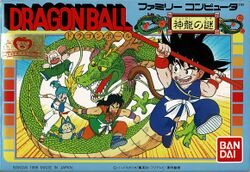 The game stars Son Goku and very roughly follows the first two volumes of the Dragon Ball manga, culminating in the first wish from Shenron. (In the US, this portion of the storyline is often called the Emperor Pilaf Saga.) The game consists of 2D overhead areas where Goku must fight many enemies and side scrolling sequences for the boss fights.

The US release, Dragon Power, was notably the only Dragon Ball-related game to be released in the US for the NES. Although the Japanese and European editions of the game used the familiar art and music from the Dragon Ball anime, the US edition made several graphical and translation changes to make the game more easily understood by the audience as the series would not be dubbed into English for another ten years. The box art features an Americanized Kung Fu stereotype. In the game, Goku has been modified to look more like a monkey. Master Roshi, similarly has been changed to look more like a traditional martial arts master.

Despite these cosmetic changes, the game is still very recognizably a Dragon Ball game and all other plot elements (the search for the Dragon Balls, etc.) remain the same, albeit with name changes. As typical for early Dragon Ball imports, character names are not wholly consistent with the ones from the current translations. Bulma is called "Nora", Yamcha is called "Lancer", Oolong is called "Pudgy", the Kamehameha is the "Wind Wave", and the Dragon Balls are referred to as "Crystalballs". Many of the more racier points in the game (such as when Bulma shows Master Roshi her panties) have been censored or changed.

In March of 1999, the translation group TransBRC released the latest version (v1.11) of their English translation patch for the original Japanese game. It is extremely rough, and uses a lot of broken or fragmented English, but it retains all of the correct naming conventions for the Dragon Ball series, with none of the censorship. You can find the patch here, but it requires a change to the NES ROM mapper in order to function properly. Patching it to the original ROM unaltered will not work.