Having obtained one Dragon Ball from Boss Rabbit on the moon, Goku is only too happy to be back on the earth where he can breath again. He sets his sights on the area known as 7 Islands, where another Dragon Ball has been detected. 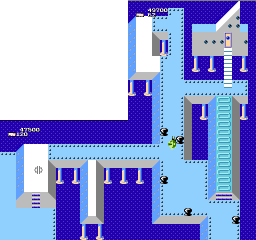 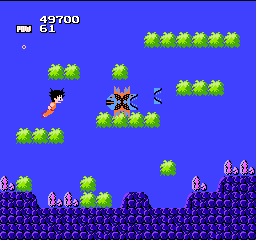 You will start out in the bottom left corner of this oddly shaped pier. A sparkling enemy guards the first ledge that you must climb up to. You can use a Kame Hame Ha attack to get rid of it, or simply ignore it entirely. Proceed to the right, eliminating one enemy. A stationary fish head serves as an easy target for you to attack, and it might provide you with a capsule. Below the head, another flashing enemy, and a large cloud like enemy wait to the right. If you time your attack well, you can actually do away with both of them with a single Kame Hame Ha attack.

The long white strip of land that extends to the south near the start contains a hidden entrance on the lower right side. If you find it, you will enter a room with a two floating enemies in a capsule. You will only be able to exit through the right side, and it will deposit you in the lower right corner of the map as a kind of shortcut.

Either way that you go, you must proceed upward. Eventually, you will see a doorway. You may be tempted to head inside, but there is actually very little reason to do so. If you enter the door, you will fall down a pit and end up in an underwater scene like the one shown to the right. Once there, you will have to fight a fish monster. Either eliminate it or push it off the screen. You will be unable to proceed until you do. Once it's gone, you can exit the right side of the screen. A man will inform Goku that to get to Seven Island, he must exit through the top of the pier.

A monster at the top will prevent Goku from advancing to the islands, so use a Kame Hame Ha attack to remove him from the area, and push up along the edge of the pier to proceed to the next map. 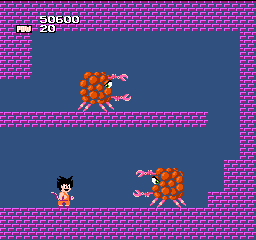 When you leave the pier, you will enter a room occupied by two crab-like monsters that occupy two different platforms. A few bricks of the upper platform will break away if Goku jumps on top of them, or hits them with his head, especially the two right-most blocks of the upper platform. You will be attacked if the crab claws touch you, but you can stand on top of their heads without taking damage.

Jump on to the head of the lower crab, and move over to the right side. To make things easier, take out the two right most blocks of the upper platform, since they will disappear anyway. Once they are gone, jump from the highest block to the upper platform. Watch out for the second crab, and when you get the chance, jump on to its head and cross over to the left side. When you reach the exit, you will end up collecting a second Dragon Ball. Of course, it won't be Goku's grandfather's ball.

Before Goku begins crossing the islands, a woman will comment on what a great fighter Goku is. She will inform Goku to watch out for a bridge, and Goku will ask for clarification as to which bridge, but the question will go unanswered. If one of the bridge monsters touch Goku, he will fall into an underwater scene where a pod is floating near to top of the water. Goku must smash the pod, smash the occupants as they pour out, and then either destroy the pod before it leaves the screen, or let the pod escape, before climb back out of the water through the top of the screen. Jump over the offending bridge monster, or avoid taking that bridge to avoid falling in the water again.

Right from the start, Goku can find a secret cave entrance by crossing the bridge, walking around the little pond in the island, and walk to the left of the tiny shrub at the top of the island. Then cross the long bridge, and walk to the south of the next island you arrive at. Another hidden cave entrance can be found beneath the southern shrub. Yet another entrance can be found under the shrub to the left of the next bridge.

The next island contains no secret entrances, but a number of bridges and enemies. Take them out carefully, or simply jump over any that get in your way. Continue on to the last island to the right. There is a hidden entrance beneath the highest right-most shrub. Another hidden entrance can be found above the shrub below that one, but it contains a man who provides you with a hint

Walk down the corridor of land to the final island below you. Remove the monster that waits in your way. Once you reach the island, you will have to punch some of the rocks out of your way to reach the exit. The monster that waits below the rock contains a key. The key opens the door at the top of the island. Avoid the remaining enemies, and approach the door. 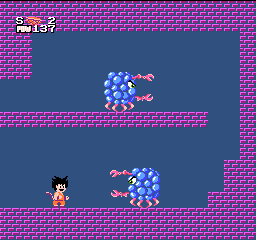 On the other side of the door, you will find two more crabs, blue colored this time. Use the same exact strategy that you used against the first set of crabs. Take out the last two blocks on the platform before jumping up to reach it and escape.

When you finish the stage, Bulma will suddenly join your side and exclaim that she found another Dragon Ball. Looking ahead, Goku will note that the next ball is located in a jungle.