Our trio of heroes, Bulma, Son Goku, and Oolong have made it all the way to King Pilaf's castle, where the final Dragon Ball resides, with Yamcha and Puar in tow. However, the balls are stolen once again, and the only way to get them back is to enter Pilaf's castle. Once inside the castle, Son Goku will have to navigate a maze of fiendishly devised traps, set by King Pilaf. Will Goku be able to outsmart Pilaf and rescue the Dragon Balls?' 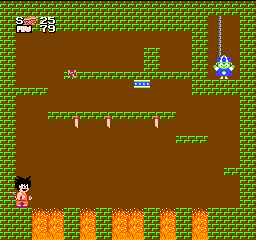 When you first arrive in King Pilaf's castle, you will have to jump over a spike trap to reach the lower section and proceed to the right. Another spike trap waits at the top of the next stairway. The blue block above the stairway, as well as many other blue blocks throughout the rest of the castle, will shoot fireballs down at Goku, so make sure you jump over them to avoid being hit. Climb down the next stairway and approach the bridge.

You cannot fall off the bridges, so the only danger you need to worry about is any fireballs headed your way. Cross the first bridge, and jump over the stationary flame (or waste a Kame Hame Ha on it for 1000 points). Cross the second bridge, and you will arrive at a large locked door guarded by a winged two-headed monster. You can try to fight the monster, but it will take a large number of hits and severely deplete your health. Instead, simply use two Kame Hame Ha attacks to blast it away very quickly. As soon as it's defeated, the door will open.

Pass through the door, and you will find yourself in the first of Pilaf's trap rooms. It looks like the screen presented to the right. First you must cross the floor of lava, while avoiding the knives which fall from the platform above (very difficult to do). Then jump up to the top of that platform. A girder moves back and forth and a bomb moves vertically to the left. You must get beyond the bomb, preferably without triggering it, in order to jump up to the platform above you. Once you make it, punch the little wall in your way, and punch a hole in the wall to King Pilaf. He will freak out and climb out of the room.

Back in the main hallway of the castle, you will need to dodge more flames and trap. Two of the blue blocks here fire arrows continuously. Jump over them and proceed to the right. The blue block above the next stairway shoots fireballs, so you must climb down the steps while avoiding the fire. This also happens to be where you will land if you get knocked into a hole in the floor during the last battle of the stage. The little blue block to the left is actually a hidden entrance. Two pod enemies guard a capsule inside. The open door in the back leads to several enemy filled rooms. You must defeat all Shu clones and trigger all land minds to gain access to a tunnel. Beyond the tunnel lies a room with three stationary capsules for you to collect.

Finally, back outside the door, you have one more stairway to ascend, with a spike trap waiting at the top. A real version of Shu will be waiting to attack you. Strike him and take the stairway up to the next level. Before you are granted access to the second map, you must navigate through the first Pilaf trap for a second time. 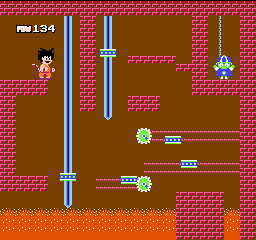 You begin at the bottom of the next map, and must work your way to the top. You start off near a floor that contains flame jets. Only one flame jet will trigger at a time, but the jet moves about the floor every moment that you do. It's best to avoid the tiles entirely and walk along the outside of them. Climb up to the ledge, and walk over to the left and down, avoiding the fireball that comes out of the red tile. Watch out for arrows and climb up the steps. Avoid the flame tiles and proceed to the stairway above.

When you move up, you will notice Mai floating about in one of her attack pods. Mai is not very aggressive and is more of a nuisance. You can ignore the pod entirely, or you can attack the pod which will destroy the outside armor. Mai will then escape from the armor and run away from you. You can attack her for 5000 points as well. While doing so, make sure you watch out for fireball and arrow traps. The top of the map has two exits, but they are identical. Taking either one will place you in the second variation of Pilaf's trap rooms.

The second type of trap room looks like the screenshot to the right. You must jump from one moving platform to the next, while avoiding the flames below, in an effort to reach Pilaf's position. Fall down to the left-most platform and jump over to the two on the right. From the higher platform, jump over to the middle stationary platform and jump on to the highest moving platform to reach the space to the left of Pilaf. Punch a hole in the wall to proceed. 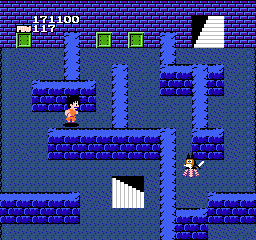 In this single room map, you must navigate around the walls, watching out for the traps that the green tiles send your way, and the knives being thrown at you by Shu. This stage is not particularly difficult, but what lends to the challenge is the fact that you will get comparatively few health power-ups. So you want to avoid taking damage from traps and enemies as much as possible. When you get around to Shu, knock him out, and proceed safely to the door above.

You will navigate your way through Pilaf's final trap room one last time. If you succeed, the gang will confront King Pilaf directly. Goku will ask where the balls are located, and Yamcha will threaten Pilaf with bodily harm, much to Bulma's satisfaction. Pilaf will confess that they are beyond the door. Oolong will insist that they hurry up and grab them. 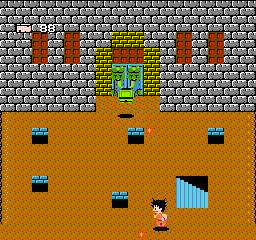 Fight for the Dragon Balls

The door where the Dragon Balls are being kept inside of, is guarded by yet another winged two headed monster. The same technique that worked on the first one will work on this one as well. Have Son Goku blast the monster with two well timed Kame Hame Ha attacks, and the beast will be blasted out of the room. Proceed through the door above to assemble the Dragon Balls and make your wish.

This ending deviates drastically from the anime, but only to provide the player with a reward before the second half of the game begins. Bulma will assemble the balls and summon the dragon. At that point, you may choose one of the wishes that are made available to you. Press

to choose between them, and press

to select one. Read the spoiler below to see the wishes and their consequences.

Your wish is granted 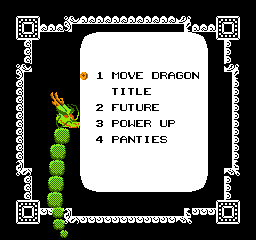