After having their wish granted, the gang says goodbye to one another and agrees to renew their search for the Dragon Balls in one year, when another wish can be granted. Goku decides that the best use of his time would be to return to Master Roshi and receive training from the very man who trained his grandfather.

For the first level of Goku's training, Goku must spar against bare-fisted monks. He must defeat three monks on the lower portion of the level in order to open the door to the inner shrine.

Once inside, he must fight another four monks in order to open the door to the chamber beyond. These monks go down quickly with just one hit. Approach them carefully, and remove them one at a time. 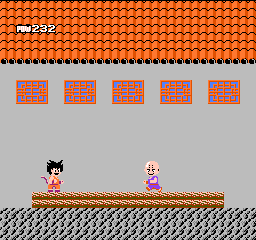 The first battle that Master Roshi arranges for Goku will be against fellow warrior-in-training, Krillin. Krillin is a fierce competitor, but the fact is he doesn't handle being cornered very well. The best stratey is to lure him to one side of the platform, and attempt to jump over him so that his back is to the edge. Proceed to punch him and push him closer and closer to that edge. While he may start out by punching you back, he will eventually do nothing but attempt to duck your attacks in vain, and do nothing to fight back. Eventually, you will knock him off the platform.