Goku successfully completes his battle against the Metal Soldier and advances to the next level of training.

For the third level of Goku's training, Goku must spar against wolf-monks. These werewolf like monks possess great strength and can do a lot of damage to Goku before he can finish them off, so be very careful when fighting them. They take four punches to take down (or two Power Pole strikes). You need to defeat three of them before you are granted access to the inner shrine. There is a secret cave entrance on the right side of the very top of the light blue ledge. Inside, you will find three stationary capsules.

Another three wolf-monks are waiting for Goku beyond the door. They must all be defeated in order to open the door to the chamber beyond. If you are having trouble fighting these monks without getting hit, try to approach them just a few pixels higher than they are. Typically, this allows you to punch them in the face, while their attacks go below your feet. If you do get hit, allow them to drop a few pixels below you, and face down to attack them, without changing your position vertically. 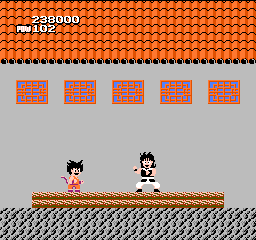 The third battle that Master Roshi arranges for Goku will be against none other than Yamcha. You have already battled (and defeated) this opponent twice, and he does not appear to have learned any new tricks. He will use exactly the same strategy as he has in the past. Namely, he will jump very high over your head when you attack, until he decides to initiate his Wolf Fang Fist attack by starting with a low jumping kick, followed by a punch, and a high kick. You are safe to attack him as long as he jumps high, but get out of his way when that low jump kick appears.