After collecting the fourth Dragon Ball from Master Roshi, Bulma and Son Goku set out in search of the fifth Dragon Ball. Before too long, they stumble upon a town, but upon investigating, it appears near deserted. Bulma and Goku eventually discover that the citizens of the town are living in fear of the terrible monster Oolong, who kidnaps the townfolk's daughters. 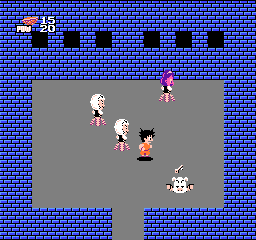 You start out on the left end of this long horizontal stage. After fighting off two crab-like enemies, you can walk into the first hut. Inside, you will learn of the villager's plight, and how Oolong is stealing their girls. Bulma arranges a deal where if Son Goku can rid the town of Oolong, they can have the Dragon Ball possessed by one of the town's women.

To achieve success, you will have to explore the remainder of the huts in the village. Many of the huts will look like the screenshot shown beneath the map. When you enter, three or four dolls will be assembled. They will appear identical, and will only come to life when you attack them. Upon punching them, they will reveal themselves as one of three things; a young woman in fear of her life, a older woman who takes a fancy to Son Goku, or the face of Oolong himself. When they appear, the young women scream, and you can catch the scream for 1000 points. If you choose, you may also attack the young women for 2000 points. When the older women appear, they release a heart which is worth 500 points. You can attack them as well, but they are much harder to defeat, and only give you 500 points, so it's generally not worth it.

Your goal is not only to find Oolong, but to find him in a hut where he leaves a key behind. When his face begins to drift away, hang around long enough to observe if the spot he was standing on contains the key. If you happen to exit despite finding the key, you can reenter the hut and attempt to find it again. You may find it once more in this hut, or you may not. The fact is, the key's appearance is random, so you always have the same chance to find it in any hut every time you enter, until it has been collected.

Other huts may contain capsules or traps. In some huts, fire shoots out from the walls. In other huts, spike traps snap shut and damage Goku if he's caught in the middle. The older women that Goku reveals will try to kiss Goku, and that will drain some of his power, so don't remain in a hut longer than you have to. 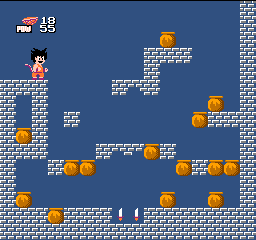 The second portion of the stage contains the remainder of the village. You will only be able to walk as far as the set of three buildings to the right of the river. Unless you have the key, you will be unable to enter them and proceed to the end of the stage. Continue to search all of the various huts until you discover Oolong and the key that he drops. As you search, remember to be careful of the enemies which roam outside. Even once you find the key, you may wish to continue exploring the huts in search of capsules for you to open. The big fenced in house just before the river contains a six capsule roulette in the back room.

Once you have the key, head right to the river. You can open one and only one of the three huts beyond the river. The contents of the hut will be random. If it's a set of five capsules, you can open them all up, and exit through the left and choose another hut to enter. If you discover a room full of young girls, you will have no choice but to exit through the bottom and proceed to the end of the stage.

Once you are outside, you must continue to the right. You will face a few more final enemies, such as crabs and construction workers. The door to the building at the end of the stage will only open once all of the enemies have been defeated. Once the door is open, step inside. You will see a scene much like the screenshot to the right. There are two ways to end this scene. One is where you discover which pot Oolong is hiding in by jumping on it and destroying it, and the other is where you discover which pot contains a pair of panties (or a sandwich), in which case Oolong will voluntarily reveal himself in order to look at the panties.

The great and fearful Oolong is revealed to be a simple pig, albeit a pig with the ability to shape shift (but only for five minutes at a time). Since Oolong was captured, and the townsfolk are satisfied, they hand over the fifth Dragon Ball to Bulma. Oolong decides to tag along with Bulma and Son Goku.