Having arrived at Frying Pan Mountain, Oolong expresses his grave concerns about being able to survive an encounter with the Ox King, who lives at the top of the mountain. But Goku isn't swayed, and Bulma insists on continuing. 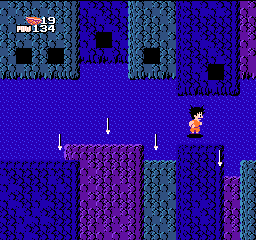 Right at the very beginning, Goku will be attacked by two very quick moving pods. Defeat them and climb up the steps to the ledge above. Watch out for the fires which roam back and forth, and take out the other pod on the ledge. Cross the bridge to the next section.

When you arrive here, you have two choices. You can take the obvious route above ground and deal with more pods and flames. Or, you can take a rather small shortcut behind the visible ledge. Just walk up to the left side of the ledge and push against the wall. You will enter a passage that looks like the screenshot below the map. Arrows will fly out of the wholes at regular intervals. Move forward between the arrows when it's safe to do so, and you will arrive on the other side of the ledge. Either way that you go, don't miss the little cave on the right side that contains four stationary capsules for you to open.

Continue on to the right, and approach the cave near the bottom. Inside, you will find four Shu clones and a capsule. Exit out and climb up to the ledge above, and proceed right, taking care of the pods that get in your way. As you move, you will see a stationary flame on a bridge. Enter the cave below to find six rotating capsules, and select one of them before exiting and continuing.

As you approach the flame, a dialog will begin. Goku will realize that it's too hot to continue, and they need to find a way to put out the flames. Bulma suggests asking Master Roshi for help. Goku agrees and takes the flying Nimbus cloud back to Roshi's home. Goku asks Roshi for his help, and Roshi asks for a favor in return: he would like to touch Bulma's chest (or eat her sandwich in the American version). Goku doesn't see any problem with this, so he agrees. Master Roshi then returns with Goku to Fire Mountain and performs the legendary Kame Hame Ha attack. This results in the fire being put out throughout the mountains. Additionally, Goku learns how to use the Kame Hame Ha attack to put out flames. When Roshi is finished, he asks Goku about his end of the deal. So Goku tells Bulma what Master Roshi would like. Bulma is furious, but she asks Oolong to transform into her, and complete her end of the bargain in her place. Oolong reluctantly agrees, and Master Roshi is delighted.

At this point, you will now be at the bottom of the map to the right. You must ascend the mountain and reach the top. Numerous caves dot the terrain and you make your way to the top. You will discover a variety of contents in the caves. Some caves will contain four stationary capsules for you to open. Some caves will contain enemies or flames, and a large door in the back. If all of the enemies, including the flames, are removed from the room, the door will open up, and you can use it to travel to some other section of the mountain (up or down). In order to destroy flames, you must use the Kame Hame Ha attack. In general, you should avoid taking the passages unless you have collected the key, and you know where the passage will deposit you.

The goal is to find the key to the Ox King in one of the caves. Every time you enter a cave that contains enemies, there is a random chance that the key will appear inside. This means, if you enter a cave and you don't see the key, you can exit the cave and immediately return, and there is a chance that the key will appear. Once you see the key, collect it so that you can exit the stage.

On your way to the top, you will encounter the Ox King's daughter Chichi twice. She has two attacks, the beam attack that comes from her helmet, and the throwing of the blade that is attached to her helmet. You are not required to defeat her, but if you have the Power Pole, you can make short work of her without putting yourself in tremendous danger. Once you reach the very top, and if you are in possession of the key, you can advance through the doors at the top. 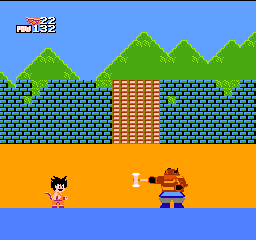 The Ox King may be an imposing figure, but he has a very predictable pattern that can be used against him. The Ox King will only swing and throw his ax once every couple of seconds. If you can predict the moment that he will initiate the next throw, you can attack him from the front until just before he lifts his arm. Shortly before he lifts his arm, you should jump over his head and begin to attack him from behind. You can remain on this side of him until he turns around and prepares to lift his arm for the next throw. You can usually get in around two or three attacks before he lifts his arm again, and immediately jump over his head after those attacks.

Once you defeat him, Bulma will be thrilled, and Goku will comment that only one Dragon Ball remains.