The final three balls are located inside a very high tower. Oolong remarks at how high the tower is, while Bulma exclaims how close they are to finishing their quest. Son Goku credits Bulma with being very braze as they approach the tower. This can be an incredibly daunting challenge, as you will have to survive the entire trip up the tower with a single life, or be forced to repeat several stages. 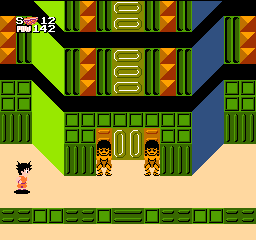 At the start of the stage, you begin outside of the tower. There appears to be two statues on either side of the door, but these statues will come to life and attack Goku when he gets close to the door. There is a simple way to deal with them. Stay on the left side of the entrance, and line yourself up with the statues. Lanching a single Kame Hame Ha attack will knock both of them out of the way, and provide you with easy access to the door. If you don't have any turtle shells, then you'll have to fight them. Use the same technique of staying a few pixels above them while attacking to avoid taking too much damage in return. When you approach the door, punch it to enter the tower.

Naturally, you will start out at the bottom of the tower and work your way up to the top. The following is a floor-by-floor account of the tower. 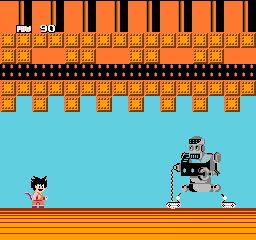 After defeating the Shogun, you will enter a room where the final boss of the tower resides. Although the large robot that you encounter looks very menacing, he is actually not much more difficult than the Metallic Soldier from Goku's Kung-Fu training. The ball and chain that the robot swings cannot hurt you until the robot launches the ball forward. So you should feel confident walking right up to the robot and attacking his knee. You may as well remain there and attack as frequently as possible. The robot will launch the ball in three directions, but only the lower direction can actually hit Goku and it doesn't happen very frequently. Continue to punch the knee as fast as possible until the robot is knocked away. If health is a concern, learn the timing of the ball attack, and back away from the robot before the ball is launched, but do not jump unless the attack is downward.

Once you defeat the giant robot, Bulma will assemble the balls and once again summon the dragon. At that point, you may choose one of the wishes that are made available to you. Press

to choose between them, and press

to select one. Read the spoiler below to see the wishes and their consequences.

Your wish is granted 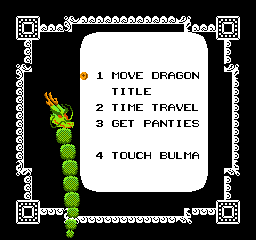