With Oolong tagging along, he decides to ask where the gang is heading next. Bulma replies that they are headed to Frying Pan mountain, much to Oolong's dismay. It means the group will have to cross the desert. During the night, Bulma wakes up to discover that the Dragon Balls have been stolen from her. She sends Son Goku out to search for them and get them back.

You will start out on the left end of the map. You must advance forward to the right. There are a few enemies to fight, and a number of mines that are triggered when you get too close to them. The mines will either explode horizontally and vertically, or they will explode in diagonals. Either way, you will be safe if you stand far enough away from them before they detonate. White insects will buzz up and down in designated areas. A Kama Hame Ha blast can remove them, but they are so easy to avoid, it's not worth wasting turtle shells on them.

The first open door that you come to contains a room with four Shu clones. If you defeat them all, the back door will open, and it will lead to a tunnel. You can use this tunnel to arrive at the low lying door all the way at the other end of the stage. There is no reason to take this tunnel at this time, so ignore it. Instead, head down to the door below. Watch out for mines, and head inside. 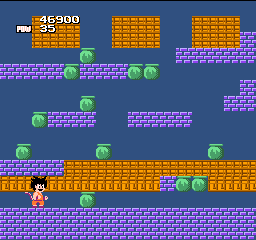 You will enter a room that look like the screen to the right. In here, you must jump up to, or on top of, every jar in the room in order to break them open. One of the jars in the room contains a Dragon Ball. Find it and collect it, and you will be taken out of the room. Bulma will express her delight with the find before you continue with the rest of the stage.

From that door, you must cross a long extent of the stage. Yamcha will appear near the top of the screen in a hover craft, tossing bombs at you. You can attempt to walk up to him and defeat him, but the fact is, it's much easier and safer to simply walk along the bottom of the screen, where you can avoid the bombs and the insects that get in your way. Eventually, you will come to the next door, but not before the floating cat Puar appears on the screen. Puar, like his master Yamcha, likes to toss bombs at you, but unlike Yamcha, Puar is not restricted to the top of the screen. 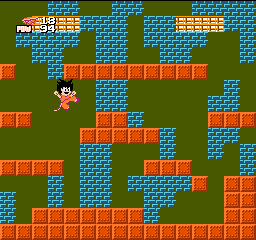 When you enter the next door, Oolong will exclaim that he has discovered a key in the room. You will then see a scene that looks like the screen to the right. In this room, you must attack every brick in order to discover the location of the key. Continue to break every brick until the key is revealed, and collect it. Once you claim it, Oolong and Bulma will discuss the possibility of using it to unlock something.

Once you are back outside again, you will have to deal with Puar if you haven't already. He tends to hover around you, but always backs away when you get too close. If you attack him, the right door on the two door ledge will open. If you head inside, you will be able to select one of the capsules from a six capsule roulette. When you are finished, exit the door and enter the door to the left. 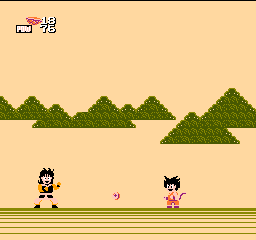 When you enter the left door, you will be in a room with Yamcha and a Dragon Ball. You can collect the Dragon Ball at any time throughout the fight, but your ultimate goal is to defeat Yamcha. Yamcha has a particular fighting style that is easy to read and avoid. Yamcha will usually back away from Son Goku when they get too close. At any time when Goku strikes, Yamcha will typically jump into the air, and over Goku's head. As long as Yamcha jumps very high (such that his feet clear the bottom of the lowest mountain in the background), Goku will be safe to attack Yamcha as soon as he lands on the other side of Goku.

However, if Yamcha does a much lower jump, then he is planning to attack Goku. He will perform a jump kick while returning to the ground. Once he lands, he will continue his attack by throwing a punch, and finishing with a high kick. Until the high kick is thrown, do not go anywhere near Yamcha, as Goku can get hit by just standing relatively close to Yamcha. Once these three attacks conclude, Goku can resume pressing his attack on Yamcha again until the next low jump kick occurs.

Yamcha has a lot of health and defense, so it will take a number of punch before Yamcha goes down. Once he is defeated, the game will resume, and you can continue on to the second half of the stage.

Goku must continue his journey across the desert. The enemy that wanders up and down to the right of the two door ledge is very difficult to defeat without Kame Hame Ha attacks and is best ignored entirely. Once you begin crossing the desert again, Yamcha will reappear on his hover craft and proceed to bomb you. Once again, you are safest when traveling along the very bottom of the screen. By doing so, you will also discover a hidden cave entrance below one of the trees that you approach. Inside is a bomb dropping pterodactyl and a single capsule.

Carefully maneuver over the trees and you will reach a section with many skulls on the ground. There are a number of mines littering the floor. The best approach is to run trough and trigger as many at once as you can, as the game does not allow more than one set of explosions on the screen at a time. The rest of the mines will explode harmlessly. Yamcha will continue to toss boss at you unless you choose to confront him directly, so keep your eye on him.

After the skulls, you will see another ledge above you with a locked door. Puar is once again guarding the entrance to the door, and the door will only open if you defeat Puar. You must do this since one of the Dragon Balls is hiding behind the door. When you enter the door, you will find a room very much like the first room described above. Break all of the jars until you find the Dragon Ball. Then climb down the ledge and proceed to the right.

The very last ledge contains quite a number of doors. The small one on the bottom is the escape from the tunnel that leads all the way back to the first door you encountered. The two doors on the outside allow you to access the location of the last Dragon Ball, and the door in the center is locked. It will only open when you have collected four Dragon Balls and the key. Enter either side door. 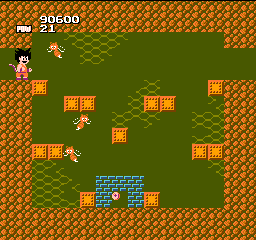 When you enter the door, Bulma exclaims that she has found another ball, and she is quite insistent that you get it immediately. The last Dragon Ball is hidden in a room that looks like the one picture to the right. The goal is simple; navigate to the bottom of the room and break the bricks so that you can access the Dragon Ball, and escape the room with it. Getting through the room without getting hit is quite a challenge. The bees are not worth fighting, so you must simply do your best to avoid them as much as possible while you claim the ball. Once you have collected it, time your escape carefully to minimize the amount of damage you take.

If you have collected all four balls and the key, the door in the center will open, and you will be able to conclude the level. If not, you will have to continue your search throughout the stage to find the items that you missed.

The second Yamcha fight is identical to the first in every way except for the setting. This time, you will be fighting in a room that has an underground passage beneath the floor. In this passage you can see a capsule. This capsule will always contain the Power Pole whether you are already in possession of it or not. If you already have it, there is no need for you to bother collecting it, but if you don't, then the pole can give you better reach while attacking Yamcha.

Follow the same strategy as before, attacking consistently as long as Yamcha continues to jump high, and staying far away from him whenever he initiates a low jump kick, followed by a punch and a high kick. Once his attack is finished, resume your's until he is defeated.

Once Yamcha is defeated, Bulma will express a little concern for his well being, as well as remarking about how cute he is, much to Oolong's disappointment. Meanwhile, Yamcha and Puar scheme on following the group and waiting for them to assemble all of the Dragon Balls before stealing them all in one shot.