After defeating the other opponents in the World Martial Arts Tournament, you'll move on to verse Piccolo. Don't worry though—this isn't the evil King Piccolo; this is just Piccolo Jr., trusted ally of Goku. It's impossible to have more Ki and HP than him at this point, so it's probably noticeable that the battles are starting to get harder. Prepare for a long battle.

Piccolo's favorite moves would probably be Ki attacks. Don't get intimidated and block whatever you can. If you don't successfully block, you shouldn't worry. Your HP should still be 500 by this point. Try using Ki physical attacks, like the throw and the headbutt. Ki blasts might work too, if he doesn't block them. It may seem hard to get a successful hit, but keep hammering at him with the same move and two out of the four probably won't be blocked. Don't use a Kamehameha until he loses around 100 HP. If you don't use it when he's weaker, he'll probably block it, thus wasting your Ki. It's best to start with physical attacks then things like Ki blasts. Also, don't get too risky with the movements. If you move closer to him to give him more damage in one move, move back after landing your move. This way, when he attacks and if you don't successfully block or dodge his attack, you'll get more damage as well. 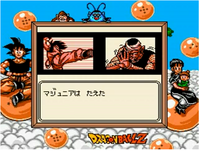 As seen in the picture, Goku is attacking while Piccolo successfully blocks the attack. In this specific battle, you shouldn't worry too much about Piccolo blocking. Focus on different attack strategies. By this point, if you have the Kaio-Ken, use it. The Kaio-Ken makes Goku stronger. Not only does this make his oncoming attacks harder to block, but it also makes his attacks have a larger impact on Piccolo, giving him more damage. Make sure you have a lot of Ki to use it, and leave some Ki for some other moves, like the Ki Blast. But don't think that the Kaio-Ken is your last resort. If you want to save your Ki for some moves you're planning, then there's another effective strategy to use. First, take 1 or 2 steps forward, depending on how far Piccolo is from you. Then put a punch and a kick in there, or if you want to try a special move, try a throw or a headbutt. Since you should have 4 available moves by now, pick two moves. You can then use your last move on moving as far away from Piccolo as you can. This way, his attacks won't be as effective on you. This may take a while, but you can use Ki attacks, which prove more effective, later on. Remember, it's best to use Ki attacks when your opponent gets weaker, and there will be a smaller chance of him blocking it. 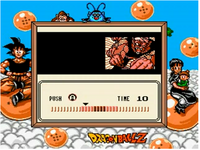 In the picture on the right, Piccolo is attacking while Goku tries to defend. The defense mini-game is seen. Most of Piccolo's attacks will be Ki attacks. They can range from very minor and easy to defend, to very powerful. Expect anything, and take a chance at defending. Blocking and dodging are both effective in their own ways. Neither one is better or worse. Because of this situation, try using the one you're best at. To see more about how to win both mini-games, go to the first battle.