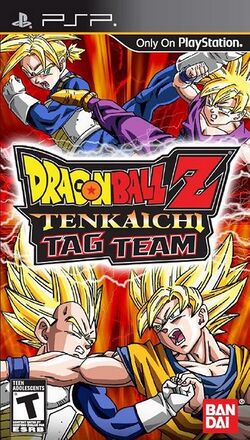 Dragon Ball Z: Tenkaichi Tag Team, known as Dragon Ball TAG VS (ドラゴンボールTAG VS Doragon Bōru Tagu Barses?) in Japan is a fighting video game for the PlayStation Portable (PSP) video game console based on the Dragon Ball Z series, and the fourth installment of the Budokai Tenkaichi series. It was released in Japan on September 30, 2010, North America on October 19, 2010, Europe on October 22, 2010, and Australia on October 21, 2010. The game was developed by Spike, and published and distributed by Namco Bandai Games.

For the first time, Dragon Ball Z players will be challenged with a 2 vs. 2 team battle feature in Tenkaichi Tag Team. This fierce fighting experience gives players access to up to 70 customizable characters. Users will recognize key themes of the original anime as they battle through single and multiplayer modes and test their skills against the blitz of ambitious fighters.