Dragon Slayer: The Legend of Heroes 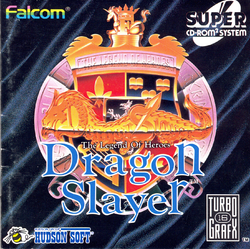 Long ago, there existed the world of Isrenasa, made up of five kingdoms. The kingdom of Farlayne, ruled by the kind and just King Corwin. was a land of peace, until the night that a horde of monsters attacked the capital, Castle Sylvan. Even though the people were able to fend off the invaders, it was at a terrible cost. During the battle, King Corwin was slain.

Because the king's only son, Prince Logan, was too young to inherit the throne, the late king's advisor, Baron Drax, stepped forward as regent until Prince Logan would come of age, at which time he would claim his kingdom. Until then, Logan would live in the village of Exile on a small island off the coast of Farlayne, raised by Elias, one of King Corwin's advisors.

Ten years have passed. Logan is now sixteen, and the day of his coronation as the new king is approaching fast. However, early one morning, Exile is suddenly attacked by monsters. Elias sends Logan to Castle Sylvan for assistance from Baron Drax, but when Logan arrives, he is suddenly arrested and brought before the regent. Baron Drax reveals that he is responsible for not only the attack on Exile, but also the previous attack on Castle Sylvan and the death of King Corwin. He has had Prince Logan declared dead, and plans to marry the queen in order to become king of Farlayne. He then has Logan thrown into the castle dungeons.

Thanks to the help of Ethan, a member of the resistance against Drax, Logan is able to escape the dungeons and hide out in a nearby village. It is now up to Prince Logan to free his kingdom, save his family, and get his revenge on the tyrant Drax.