From the moment you set foot outdoors until you have utterly destroyed the Dragonlord in his dark fortress, enemies will hound your every step. To keep alive you must learn to defend yourself. Battling with weapons in the Fighting Mode requires a sharp mind more than a sharp blade, although a good sword is always welcome. What is important is that you know your own strength and that of your opponent. Note which spells a creature uses, how many HP of life it has, etc.

Each round of combat provides you with a choice of actions. Following your action, the monster will have an opportunity to act before you get to act again.

Whenever you fight, you swing your weapon to strike the enemy. At a rate of 1/64, your strike is so successful at hitting the enemy's weak point that your blow ignores the foe's defense and does tremendous damage. Though it can not be counted upon, it can substantially shorten the length of a battle. An item is rumored to increase the likelihood of this beneficial luck, but due to a bug in the program, this is unfortunately not true for the original version of the game.

Just because you request to run away from a monster does not mean you will always get the opportunity to do so. Monsters that are stronger than you are usually quicker than you as well, and can cut off your route to escape. Don't wait until only one more strike can finish you off to run. Be prepared to take off sooner in case you can't get away the first time. 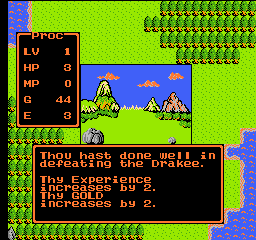 Experience and gold are gained when defeating monsters

Each time an enemy is defeated, you gain both experience points and gold. Greater amounts of experience points are awarded when you defeat stronger enemies, and will increase your character's level when you accumulate enough points. Use gold in the shops of Alefgard to purchase weapons, tools, armor and other items and to stay at the Inn. 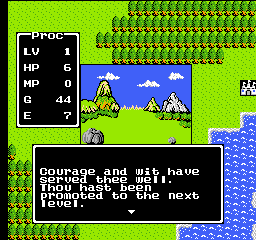 Each level gained grants your character greater strength (power) and agility (speed), as well as higher maximum HP and MP. On certain levels you will also learn a new spell. 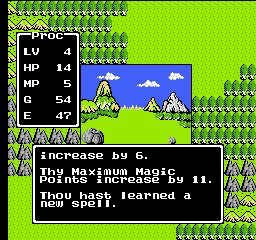 When your level rises to 4, you will learn the second spell - Hurt

Magic spells are learned only after many trials and failures. At particular levels you will learn particular spells, but don't expect to learn a new spell each time your level increases. There are ten spells in all.

At level 3 you will learn your first magical spell, Heal. When the spell of Heal is chanted it raises the chanter's HP by as much as 15. During a fierce battle you may notice your HP sinking rapidly. That might be a good time to use Heal.

Next, at level 4, the spell of Hurt is learned. It is an attack spell, capable of inflicting up to 15 HP worth of damage on an enemy. Once you've learned a spell and saved the game, you can't lose it. MP is required in order to cast spells. Without MP, you will be unable to use magic, so keep an eye on your Condition Window.

Gold may be used to rest at an inn, to buy items, or to upgrade your equipment. Equipment - weapons, armor, and shields - is available in shops present in nearly all towns. When selling you a new piece of equipment, the shopkeeper will buy back the piece it is replacing. In general, you should find and purchase the next piece of equipment once you have enough money saved.

Although you only receive a fraction of the equipment's value when selling it, it is always good to upgrade your equipment at first opportunity rather than saving up for the next piece; even a slightly increased attack or defense power can make once challenging monsters seem easy and you may find that it is experience levels that limit your advancement rather than gold. Similarly, a few equipable items - the Dragon's Scale and Fighter's Ring - will provide bonuses independent of level and speed along your quest.

When in battle, each enemy's counter-attack is likely to inflict some damage on you. Your hit points (HP) will be diminished according to the strength of the enemy and your ability to withstand its attack. Body armor, a shield, or simply raising your character level can help you stand up to the onslaught of a ferocious monster.

When your HP fall into dangerous levels, portions of the screen will turn orange. This is a warning that death may be imminent. 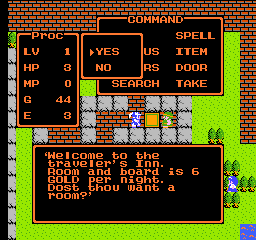 When you spend a night at the Inn you pay the Innkeeper then retire for the night. 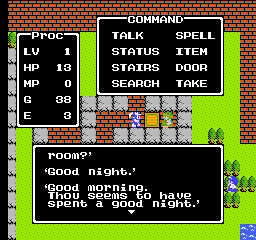 Upon waking next morning, your HP and MP are at maximum strength.

If you are badly wounded, make your way back to town as quickly as possible. When you reach a town, go at once to the Inn. By spending a night at the Inn you will restore all your HP and MP.

The Medicinal Herb available in tool shops is one of the best buys in Alefgard. Always carry some Herbs with you when you travel. To use them, just select ITEM in your Command Window and choose Herb from the list of items that appears.

Spells may also be used for healing. Simply choose the spell, either in combat or from the command window, and you will be healed. 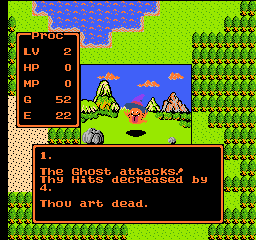 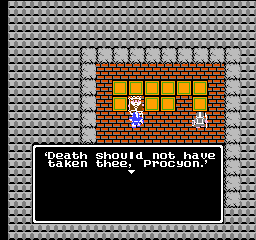 ...and live again in Alefgard.

There may come a time when you bite off more than you can chew. If a servant of the Dragonlord defeats you in battle, you will die and lose half of your gold. The King, however, has the power to restore your life so you can continue your quest. Only your supply of gold ultimately suffers. 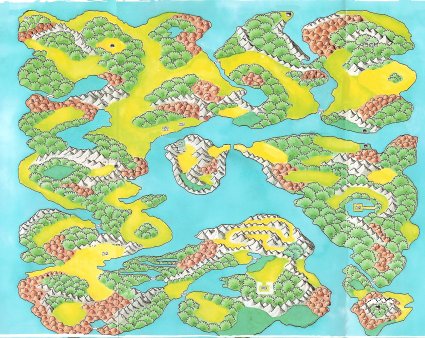 With higher levels come greater strength, stamina, and wisdom, not to mention wealth and spells. You are able to explore ever more distant lands and towns. Test your limits, but be careful not to push yourself too far. If you encounter some new invincible enemy, don't go further; build up your level first. There is no substitute for experience.

A good guideline is that each time you cross a bridge, enemies are likely to become tougher. At low levels you should be able to explore many regions of Northern Alefgard, but beware of the Southlands.

Although you see only a small portion of the land as you travel, the Kingdom itself is a sprawling place. Broken by mountain ranges and split by the sea, Alefgard is not easily crossed. Each town is an island of humanity where you can restore your HP and buy needed supplies. But the wild forests, deserts and swamps are always near at hand. You do not defeat the land, you merely deal with it. Aided by this map, you should be able to begin planning your journeys. In time, even the most distant points will become more familiar to you. Remember to write down the secrets you discover as you progress.

Some towns and castles have a small border around them that allows you to walk along the outside of boundary without leaving the town. If you take advantage of this fact, you are bound to find many points of interest that would be otherwise inaccessible. 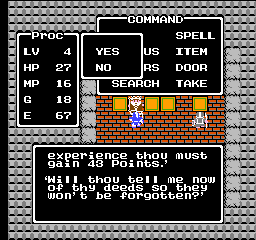 Talk to King Lorik to save.

Whenever your level increases or you obtain a special item, you should return to King Lorik and save the game. Then, if you are defeated you won't lose the items and experience you've fought so hard to win.