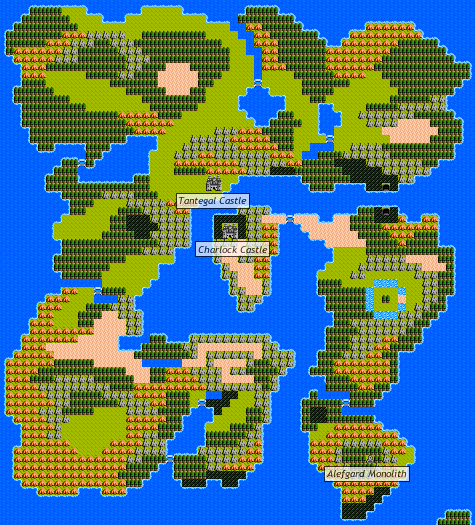 You have finally returned to the land of your great ancestor, Erdrick, Slayer of the Dragon Lord. Many recognizable features of this memorable land remain, although they might not appear exactly the way you remember. It may appear as though Alefgard has shrunk, but you may consider that the view of the land has zoomed out a little bit instead. All of the original towns, and explorable dungeons are gone, save for one cave and monolith. Once the Dragon Lord was defeated, civilization began to expand outside of Alefgard's borders. Even the single remaining cave, the one in which Princess Gwaelin was originally held captive, has been drastically simplified. Only Tantegal Castle and its neighboring town remain, along with the opposing Charlock Castle across the water.

If you are approaching Alefgard for the first time from Lianport, then you will be sailing up to the west coast of the land. Bridges will block your ship from coming very close to Castle Tantegal, so you'll have to walk the remainder of the way. However, when you cast the spell of Return or use a Wyvern Wing to go back to Tantegal, you will notice that your ship docks very neatly in the water to the south of the castle, forcing you to exit Alefgard slightly differently from how you came. While exploring Alefgard, you will encounter yet another set of increasingly strong monsters. Head straight for the castle to establish a safe point from which to explore. 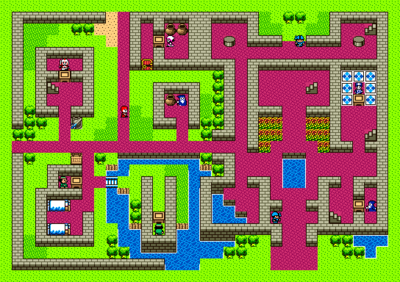 The setup of Castle Tantegel has been simplified somewhat, but remains largely similar to the original. One surprise, however, is that Brecconary town has been merged into Tantagel Castle, and now lies on the western side of the castle itself; to visit the town, you must enter the castle, and walk along the left side until you see the path which accesses the town.

Another surprise awaits you at the castle: the King of Tantegal has gone missing! The guard in the throne room informs you that he is hiding from Hargon's minions. Apparently the descendant of Erdrick who directly inherited the throne isn't quite as brave as the members of your party. In lieu of the absent king, the priest at the temple will save the game for you, while his assistant below (or up the stairs in the remix) will perform all of the temple duties such as detoxify and revival. Additionally, the descendant of the sage who could restore Erdrick's magic points with a prayer occupies a similar location and can perform the same miracle for your party.

The weapons shop in town has a number of powerful items, including the Iron Helmet and the Giant Hammer. The Helmet is certainly useful, although you may wish to hold off on purchasing the Hammer; you are only moments away from obtaining a better weapon for free. Other than this, there are a few sections of town blocked off by red doors which must be opened with the Gold Key, which you do not have yet. You'll have to remember to come back here when you obtain it.

From its original position, Castle Charlock sits ominously across the water from Tantegal. This was the scene of the final battle between Erdrick and the Dragon Lord. What secrets remain in this once formidable castle? Before you find out, you should try to bring the Prince of Midenhall up to level 15, just to be on the safe side. Even then, it will be quite a challenge. If you're feeling lucky, you may wish to explore the east region of Alefgard, below the tunnel. Every now and then, you may be attacked by a whopping eight Metal Slimes! However, they frequently run away and killing even just one of them can be quite difficult. You'll also have to watch out for powerful Saber Tigers, and the Poison Lilies with the power to potentially poison your entire party in one turn. 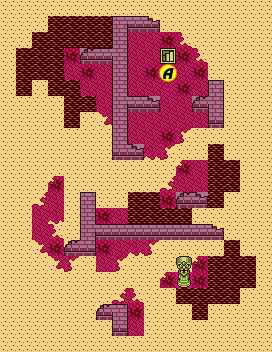 Upon entering Charlock Castle, all you will find are the dusty remains of the previously labyrinthine entrance hall. The stairs to the level below which used to be a well hidden secret behind the thrones, is plainly visible. What follows is a twisting series of floors and staircases that remain fairly true to the original design of this castle. You can use the maps in the gallery below to help you plot your course from the top floor to the very bottom where the descendant of the original Dragon Lord lies in wait. Along the way, you will want to make sure that you collect the very important treasure chest that can be seen in the center of the second basement level. To reach it, you'll have to climb down to the fourth level, and begin to work your way back up through a different set of staircases. If you make it, you'll find a very important weapon: The Sword of Erdrick. This is your ancestor's blade, the very one used to strike down the original Dragon Lord. Time has aged it, and although it is not the greatest weapon available in the game, it is far better than anything you could have purchased at this time, so be sure to equip the Prince of Midenhall with this weapon. (If you're playing the Remix version, the Prince of Cannock can equip the Sword of Erdrick as well! In this case, give it to him, and purchase a Giant Hammer for the Prince of Midenhall.)

Once you have the sword, you may continue your descent deeper into the castle, or return to the surface in order to restore your health at an inn, and save your progress before continuing. The enemies that you encounter in this Castle are no slouches. The incredibly resistant Gorgons like the cast Increase on themselves frequently, making them nearly impossible to hit. Mummy Men have incredibly strong strikes, so take them out quickly. Once you make it through the twisting staircase maze to the bottom level, you will see a familiar scene; a brightly lit underground level surrounded by water. If you are playing the original version, ignore the four treasures in the center, you will need the Gold Key and preferably someone who knows the Stepguard spell. If however, you are playing the remix version, the red door will be gone. You must merely brave stepping over the barrier tiles, so either cast Stepguard if you have it, or use Healmore frequently after a couple of steps. In the remix version, you will be rewarded with gold, Steel Armor, a STR Seed which you can use to permanently raise one member's strength, and the WorldMap! This remix exclusive item lets you see the entire world, and your current position in it. Very useful if you happen to get lost at sea. 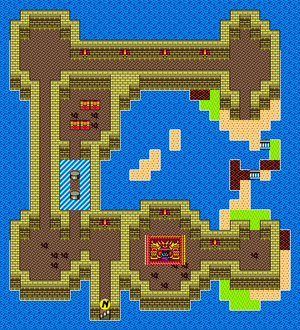 You must wander around to the throne of the Dragon Lord where you will meet his descendant. He will ask a question of you similar to his ancestor: Will you help him? In this case, it is perfectly all right to agree with him since you and he share a common enemy in Hargon. He wishes to see Hargon defeated as much as you, so that the Dragon Lord can claim his "rightful power" over the world. Despite his different philosophy, he will provide you with a great clue. He tells you to visit the Shrine of Rubiss south of Midenhall Castle, upon collecting all five crests. But what are these crests he speaks of? That is the next step in your journey to find out.

Once you have spoken with the new Dragon Lord, you can cast the spell of Outside and return to Tantegal Castle. Rest up and save. There's an entire world to explore now. The remainder of the Walkthrough is only one method in which you can complete the game. Ultimately, you can travel in the direction of your own choosing. For now, we will start by sailing south of Tantegal, to an island occupied by nothing other than a Lighthouse.