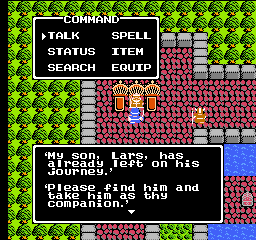 The right place at the wrong time. 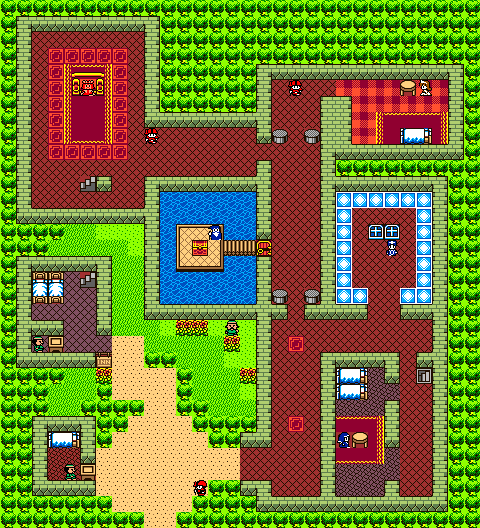 After travelling north from the town of Leftwyne for a while, you will reach a mountain range. At the west end of that range lies Cannock Castle. You have finally made it to the home of one of your cousins. While there are a few places to poke around and explore in Cannock, you should probably head straight to the king and request the aid of the Prince.

When you reach the king, he will unfortunately inform you that the Prince of Cannock has already left on a journey, presumably with a similar purpose of seeking you. No specifics are given, but there is talk of a Spring of Bravery that all adventurers visit to prove their worth. It lies far to the north of Midenhall and far to the east of Cannock. Perhaps that was the Prince's first destination.

Around the castle, you will find an item shop selling the same items as the item shops you have seen before. There is also an inn which charges 8 gold pieces per head. In the remix version, a wandering merchant has set up shop outside the castle gates as well. There are a few other people to listen to, such as the Prince's sister, and a few jailed up criminals. When you are ready, you should depart and head to the east. 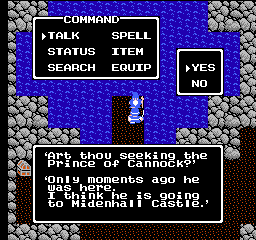 Too late yet again. 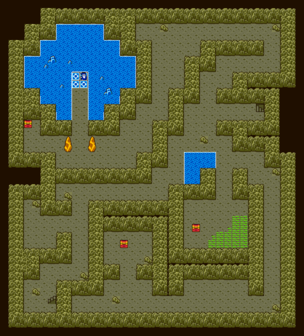 You can reach the Spring of Bravery by many different routes. Assuming you are leaving from Cannock Castle, the shortest route is to follow the north coast through some hills and desert until you cross a bridge, and the northward to a cave entrance. Although this route is short, it is also quite dangerous as it places you in Babble and Healer territory, so travel with care.

When you reach the cave entrance, step inside and you will discover what it is like to explore a cave for the first time. In comparison to the first Dragon Warrior, you will find that the cave are more expansive and elaborate. However, to compensate for the increased difficulty, you are no longer required to provide your own light source. The enemies in this cave are similar to those which you have already encountered. The only new enemy which you may chance upon are the Big Cobras, which can be quite tough at this stage. They can inflict poison, so it's a good idea to have at least one Antidote Herb on hand, just in case.

In addition to the spring, which is found in the back portion of the cave, there are three treasure chests for you to discover and open. The chest closest to the entrance contains a Medical Herb, while another which you have to travel around and to the south to reach, contains an ample amount of gold. When you reach the top part of the cave, you will enter the back portion. Walk to the left and down and you will find a man standing beside the water.

If you talk to him, he will ask you of your business. If you say that you are looking for the Prince, he will inform you that a man matching that description had visited him only moments ago. Unfortunately, your search has not concluded. If you talk to him again and tell him that you have other business, he will bestow the blessings of the Spring of Bravery upon you, which will completely restore all of your lost health! Before you leave, don't forget to collect the free Antidote Herb stored in the chest to the left. 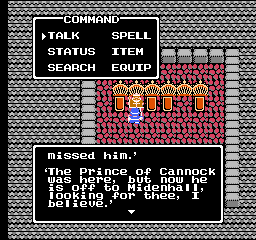 You've even missed him at your own home. 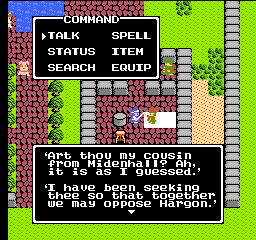 Finally, you meet him in Leftwyne.

Unfortunately for you, the Prince of Cannock could not be found in his home, nor could you find him at the Spring of Bravery, although you appear to be hot on his trail. Since you are so close to home, you may as well pay a visit to your father and seek his advice. Upon your return to Midenhall Castle, you will find that all is still well. Your father will inform you that you only just missed the Prince of Cannock, who has discovered that you were seeking him all this time. There is only one place left to go at this point; back to Leftwyne.

Travel west to the Town of Leftwyne once more. When you arrive, if you look inside the Inn, you will notice a man in green sleeping on a bed who had not been there previously. Walk to him and talk with him, and you will discover that he is in fact your cousin, the Prince of Cannock. You have finally united with him, and he gladly joins your team.

By this time, the Prince of Midenhall should be around level 5 or 6. It seems that in all his time wandering around and looking for you, the Prince of Cannock did not earn any experience. It would be a good idea to take him on some fights with you until he raises a couple of levels. He too could benefit from some increased protection and better weapons if you can afford the acquisitions.

The Prince of Cannock also begins the game with your very first spell, Heal, a very practical spell that will drastically reduce your reliance of Medical Herbs when you're away from an Inn. At Level 3, he will gain his first offensive spell, Fireball, which can do more damage to an enemy than a conventional attack from the Prince might otherwise cause.

Although you've been focused on your mission to collect the Prince, you've been hearing quite a bit about the importance of finding keys. With the aid of the Prince of Cannock, you can now head west to the Lake Cave and seek out your first key.