While wandering around Moonbrooke, you may have noticed a stretch of land head west away from the castle. A pair of monoliths straddle a river that divides the continents. If you visit the east one, you will find a woman inside who gives you advice which you should already be aware of; visit the House of Healing if you are in need of help. The only other (visible) feature is a stairway that leads out to the west monolith. From here, you can access the wide desert to the west.

While you traverse the desert, there is a new enemy that you may encounter, the Carnivog. It is a plant-like creature with the ability to disperse a gas which can put members of your party to sleep. Additionally, its attack is quite strong. It is not uncommon for them to show up alongside Babboons. Also possible, but far less likely, you may run into Mummies. Other than the need to keep your health up in the face of these increased threats, the journey west will be relatively uneventful. You will eventually reach a small oasis, at which point, you must begin to travel north, where you will find two towers separated by a river.

The two towers that you come to after journeying north from the desert are known as the Dragon Horn towers. You will come to know this if you ask the man standing on the bottom floor of the south tower, which is the only one you can access. No map is needed for the South Dragon Horn tower because it is very simple. Think of the tower as a winding staircase that wraps around the edge of the tower in a clockwise direction. Every new floor is actually just another flight of steps that wind their way to the top, while in the center is a dark hole which leads directly to the first floor, no matter where you fall from.

If you wish to make it to the top quickly, stay away from the edge of the hole. You would be wise to make it to the top as quickly as possible since you can be attacked by roaming monsters at any time. Of course, if you do run into trouble, you can fall down the tower center to exit out and cast Return to heal up.

Once you make it to the very top, you will make an interesting discovery: the top of the tower contains nothing but an exposed gap in the north west corner of the wall. From here, you can either fall to the north or to the west. What is the purpose of this gap? This is where the Cloak of Wind comes into play. By donning the cloak, if you fall off a tower, you will float several squares away as you fall. If you hop off to the left, you will wind up a few squares west of the tower you just climbed. Likewise, if you jump off from the top, you will wind up several squares north of the tower… beyond the river which you previously could not pass.

By jumping north from the tower, you have overcome the obstacle which prevented you from journeying any further north. Now you can proceed to explore the remainder of the region. While you can visit the North Dragon Horn tower, there is no need to do that at this time, and you will likely be in need of an Inn anyway. Fortunately, there is one just around the corner in Lianport. While you complete your journey, be especially careful, as there are quite a number of stronger enemies that you will face for the first time, such as Demighosts, Enchanters, Magic Babboons, and the Mud Men who have a tremendously annoying ability to steal away your MP by dancing a strange jig. 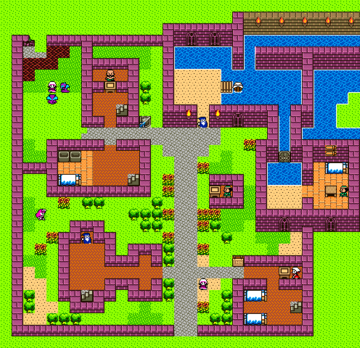 You have survived a great deal to make it all the way to Lianport, and you have earned a well deserved rest. But Hargon waits for no one, so you must quickly return to the task at hand. The only problem is, your next destination is not so clear. Exploring Lianport may help you out in that department. Surprisingly, one topic that is on many of the inhabitants' lips is the land of Alefgard, the location of the events of the original Dragon Warrior. Perhaps you are nearby. But you have explored the entire walkable region of two continents, and you have yet to find a way to look beyond.

It won't be long before you discover that there is a boat docked at the north end of town. The old man who guards the entry to the port, however, informs you that they do not lend their boat to strangers. It looks like you might out of luck. However, if you explore the area in the north west corner of town, you will chance upon a young lady who is being assaulted by two Gremlins. Intercede on her behalf and the Gremlins will challenge you instead. As long as you have rested up, you should be able to make short work of these two, and the young lady will be very grateful, and ask you to follow her to talk to her grandfather… who just so happens to be the gentleman guarding the port entrance.

Upon hearing how you assisted his granddaughter and saved her from the Gremlins, he will repay your kindness by granting you access to the boat. Congratulations; with one generous act, nearly the entire world has become accessible for you to travel and explore. Having such freedom without direction can be a bit daunting. But you've been hearing so much about Alefgard, that perhaps it's time to pay the land of your ancestor a visit. Before you do, there are two things to make sure of while in Lianport.

Visit the weapon shop and make sure you purchase the Clothes Hiding for the Princess, the first substantial increase in defense that she can equip in some time. If you're playing the remix version, you may actually choose to purchase the Evade Cloak, as the Clothes Hiding is known, for all three party members, as it has been substantially improved over the original version. You may also wish to pick up a Wizard Wand. In the original version, that is optional since it won't increase anyone's attack power, but it does grant its holder the ability to cast Fireball when used in battle. This can have an even better effect than the Magic Knife against certain monsters. However in the remix version of the game, this is actually a substantial offense increase for both the Prince of Cannock and the Princess of Moonbrooke. And lastly, before you set sail, visit the little house off to the right of the port. The door will be locked with a silver key, but you can easily fix that. The gentleman inside will offer you a handsome reward if you can retrieve that lost trasure of the sunken treasure ship "Relentless". As to where it can be found, he offers no clues. 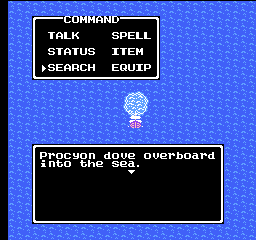 The Relentless ruins
Finding the sunken treasure could be quite a chore. Without any clues to direct you in the right direction, and a very large expanse of ocean to search, you could be looking for a very long time. However, if you luck out and make the right decision, your search could end quite quickly. You'll first need to speak to a man in Tantegal castle who gives you a clue as to what you should look for. Without doing this, you will never be able to see the sunken ship. Once you do this, it just so happens that if you travel due North from right outside of Lianport, you can't help but stumble upon exactly what you're looking for, a small light patch of ocean. Pull up alongside it and search while facing it, and you will dive down and reclaim the Treasure. Return to Lianport and visit the man behind the silver door to deliver the Treasure to him. In return, he'll give you the Echoing Flute, an item that is about to become very useful to you throughout the rest of your quest.

Once you navigate the boat outside of Lianport, it is yours forever. There are a couple of things to note about the boat. The first is the odd nature of this world. Naturally, you would expect that when you sail off the west side of the map, you will find yourself on the east side and vice versa. However, due to the nature of the game, the same is true concerning the north and south sides of the map. Sailing above the north most region of the map sends you to the south side and vice versa. It is not difficult to understand, it's simply a quirk that you should make note of. The second is that when you cast the spell of Return, or make use of Wyvern Wings, the boat will automatically return to a point just beyond the location that you returned to, so you never have to worry about abandoning your boat and losing it in the process.

If you're wondering how to find Alefgard, it's not hard at all. Simply set sail due East, and you will stumble upon it in no time. While you sail through the water, you will encounter an entirely separate class of water type enemies, so even though you are not wandering across the land, you must still be prepared for battle with random encounter.