After collecting the Silver Key, you'll need to visit the Monolith west of Cannock Castle to gain access to the continent of Moonbrooke which lies south of the continent of Lorasia. Head to the stair case in the corner, and you will enter a cave. The cave is a very simple tunnel that runs north and south with no remarkable features to speak of. The big threats here are Big Cobras, Magicians, and the occasional Centipod. There are two rooms off to the left, one at the top and one at the bottom. The one at the top forces you to traverse down a separate hallway to reach a set of stairs which lead you to… and empty island. There is no reason to take this path. Instead, travel down to main path of the tunnel and enter the left room at the very bottom. Here you will find stairs that lead you to the mouth of the cave on the other continent.

From here, you must trek south quit a bit until you find civilization once again. The enemies you encounter become more dangerous as you travel. Magicians will be quite common, as will Magidrakees, Centipods, Smoke, and if you are very close to Hamlin, expect to encounter a Baboon or two. Centipods have a high degree of defense, so even though the Prince of Midenhall can damage them with a sword, the Prince of Cannock might be better off casting Firebal if his magic points are plentiful. Smokes, on the other hand, are capable of casting Stopspell on your party. This isn't such a danger because of the attack spells that it prevents you from using, as it is a danger because it prevents you from healing your wounds mid-battle. 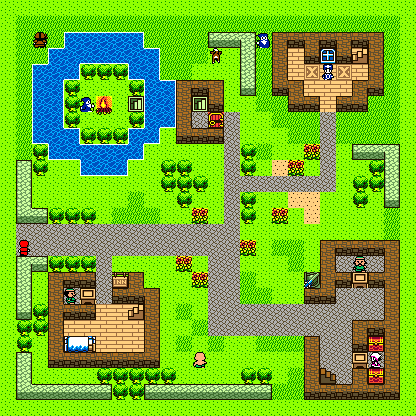 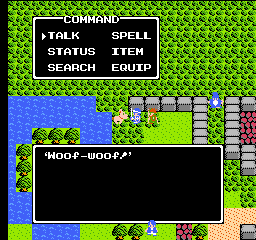 The curious dog of Hamlin.

Hamlin may look like a sleepy town, but it will be the base for your efforts for a considerable amount of time. The Inn here charges 12 gold per head, but by the time you reach it, you will no doubt be in need of some rest. Across the way, you will find a shop with some considerably powerful weapons and armor to purchase. You will have to do a lot of work to save up for these goods, but it's well worth the effort. There is a small inaccessible island with a man sitting on it, which you will only be able to explore after you collect the gold key. In the original and mobile versions, a lottery ticket stand will be set up across the path from the locked door, whereas in the GBC remix, it has been moved to the second floor above the shop, along with a storage center for goods you no longer wish to hold on to, but don't want to throw away. A temple in the back provides the usual detoxify, uncurse, and revival services. And last but certainly not least, an old man stands in the north end of town between two walls. If you talk to this man, he will tell you how much experience you need to gain the next level and will even offer to save your game in the absence of a king. Take full advantage of his offer before venturing onward.

A dog tends to stick to the north part of Hamlin, to the left of the old man who saves your game. If you approach the dog and talk to it, it will bark, and suddenly appear at the back of your party as though it's joined you. Alas, as soon as you leave Hamlin, the dog will be left behind. This is obviously no ordinary dog.

To play at the lottery ticket stand, you must of course have a lottery ticket (referred to as a slot token in the remix). You collect these by defeating certain monsters, buying items, or finding them in chests. One chance at the stand will cost you one ticket. Upon playing, three symbols will cycle around like a slot machine. You press a button every time you want one of the wheels to stop. If you get three of the same symbol, you will gain a prize. If you manage to get two of the same symbol anywhere, the stand owner will generously give you another chance at the game. The Gold Card is the only prize which you can uniquely obtain through the lottery. If you possess one, the cost of goods are reduced at each of the shops you visit. 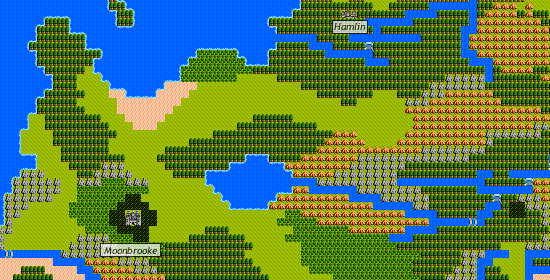 From Hamlin, there are two destinations; the ruined castle of Moonbrooke, and the Tower of Wind. It is better to wait for another helping hand before approaching the tower, so visiting the castle would be a good idea. To reach it, you must cross the bridge south of Hamlin, and begin to journey to the west. Stay a bit to the south as you travel so that Moonbrooke will come into view. Along the way, you can expect to be attacked by the likes of Babboons, Zombies, Lizardflies, and Megapedes. Be especially careful around Zombies; they have the highest amount of hit points of any enemy you have faced so far, and they can use the Surround spell which makes it difficult for your party to strike their target. 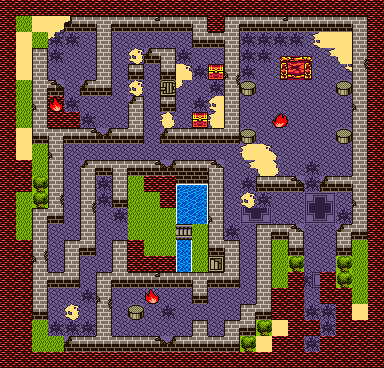 Moonbrooke is surrounded by a poisonous marsh that will damage you very slightly as you step over it. Once you reach the interior of the castle, all you will find is a shadow of its former glory. As you walk around, you may be attacked by enemies just as you would outside, so monitor your health closely. Unlike the outside, there is an incredibly small chance that you will encounter a Metal Slime… and an even smaller chance that you will defeat it and collect the thousands of experience points it provides. The walls and floors are cracked, and no life can be seen. Instead, you will find wisps of flames that wander about. If you approach them and try to talk with them, you will find that they are cursed spirits of those who died in Hargon's initial attack, including the king of Moonbrooke himself. He will inform you that a curse was placed on the Princess, turning her into a dog, and begs you to break it. You may be disappointed to find that both chests in the castle are empty, but a second flame informs you that an object called the Mirror of Ra can be found in a location where four bridges are visible at once.

As you explore, you will notice the garden in the center of the castle, but your ability to approach it seems closed off by the walls. However, if you journey to the north west corner of the castle, you will actually be able to walk along the west wall, through more poisonous marsh (keep your health up), until you reach the south corner, where you will be able to access the garden. If you journey down the steps, you will find the only living person, a soldier, with most important information; it seems that the only way that the curse can be broken is if the Princess gazes upon her reflection in the Mirror of Ra. With this information, your next task is clear. 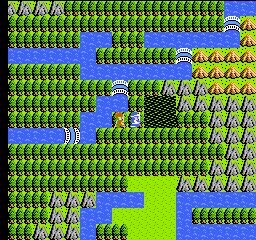 The location of the mirror

You are now in search of a location in the world where four bridges are in view at one time. It may take a bit of searching to find such a place, but if you journey east from Moonbrooke, traveling south below the lake that you passed as you approached the castle, you will eventually find a very small marsh. Standing before this marsh, you can in fact see four bridges, so this must be the place. If you search inside the marsh, you will discover the Mirror of Ra in the upper right corner of the marsh. With the Mirror in your possession, now you must find a dog to show it to. Clearly the odd dog that you found in Hamlin is a good choice. 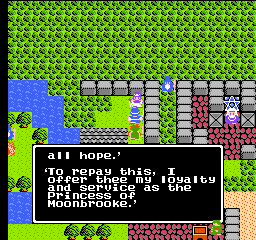 The curse is broken

The return to Hamlin is most easily accomplished if you have a Wing of Wyvern. Otherwise, follow the river back to the west, around the lake, and back to the east until you find the bridge that will lead you back to the town. Approach to the dog that wanders about the north side of town. Stand next to it, and use the Mirror of Ra (select it from your Items menu). The dog will look in the mirror and behold, the curse will be broken. The Princess will return to her original form and gratefully join your party. While she will add little to the fighting prowess of your party, he magical skill makes her indispensable. She even starts out with the powerful Healmore spell, and a healthy amount of magic points.

Now that your party is fully assembled, you are ready to embark on the next part of your quest. While you might be curious about the monolith south of Moonbrooke castle, you efforts are best concentrated on finding the Tower of Wind that you may have heard about, and obtaining the treasure found within.