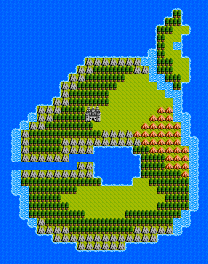 Osterfair is the easiest island of the eastern hemisphere to identify and locate, as it is rather large. Merely sailing south from Midenhall Castle will take you directly to the west side of the island, which is the only side you can access the rest of the island from. A river provides access to the lagoon in the center of the island, from which you can disembark and travel north to the castle above. The enemies which occupy the island are quite powerful, so be sure that you are strong enough to handle the enemies here (approximately Level 20 for the Prince of Midenhall) before visiting.

Osterfair has a few unusual details. You always enter through the interior of the fortress wall, which you can explore all the way around to the other side where you will find a Travelers Gate and a door locked with the Gold Key. Without the Gold Key, you will be unable to both open this door, or the doors that you find upon your arrival to the other side of the Travelers Gate. The inside of the castle holds more interest for now. 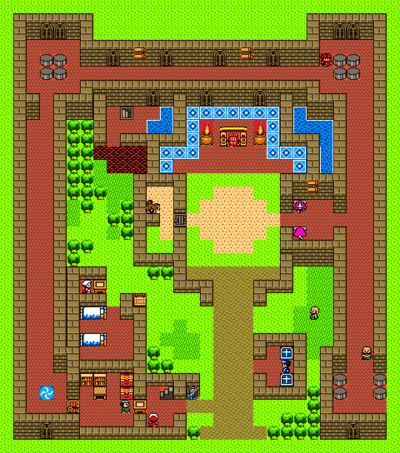 Upon arriving inside the castle, you will first wander into an arena area situated in front of the king for his viewing pleasure. If you are at all low on hit points, don't chat with the king just yet; visit the Inn first and restore your health, then approach the king. The king will invite you to take the arena challenge, in which you will be pitted against a fearsome Saber Lion. The Saber Lions are much stronger than their tiger cousins, but you should have an ample amount of hit points to sustain a few hits from the lion before you're in trouble. This three on one fight shouldn't be terribly difficult, and your reward for winning the battle will be one of the five prized crests, the Moon Crest. 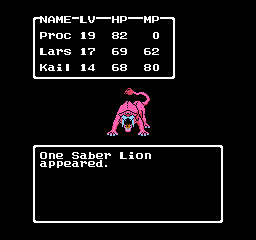 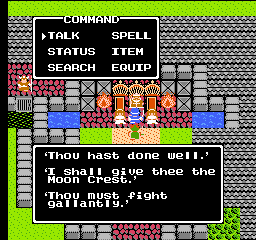 Being awarded the Moon Crest

The talk of the town is all about the sunken pirate ship Relentless, and its supposed lost treasure, the Echoing Flute. If you haven't found it yet, it would be worth your while to find it. The man who lives in the home just off the port in Lianport is the gentleman looking to reclaim the treasure. You will find an item shop with a good collection of strong weapons and armor, including the Dragon Killer and Magic Armor. In the original version, Magic Armor is a good upgrade for the Prince of Cannock, and an expensive boost in magical defense over the Steel Armor for the Prince of Midenhall. In the remix version, Magic Armor is actually a trade off with the Evade Cloak. You will trade the boost in ability to avoid hits for a small increase in defense against sleep spells.

The island of Zahan is the smallest populated island in the whole world. On top of that, it's in a very isolated portion of the southern sea. There are two ways to ensure that you will find it when you set sail. One way is to sail to the east side of Osterfair island until only the shoals are visible on the left side of your screen, and then sail south until Zahan comes into view. Another way is to travel above the Spring of Bravery to the three small islands that branch off the continent to the right, and sail north from the center island. If you are approaching from the west, you will find Zahan if you sail east just south of the island that contains the World Tree. The monolith visible to the island's left contains the Travel Gate that is connected to Midenhall Castle. 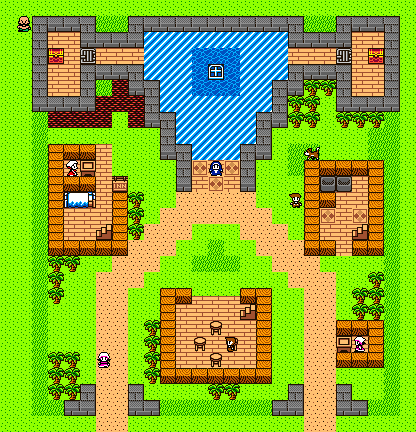 When you first visit Zahan, there won't be a tremendous amount for you to do here besides talk to people and explore. But there's one important item here that you should find that will open new realms for you to explore. Most of the women here are concerned about the fact that all of the husbands and fathers are gone fishing. But a few have some interesting clues to give about a volcanic sea cave surrounded by shoals, and the fact that you cannot enter it without a fragment of the moon. But they offer no suggestion about where you might find such a fragment.

One boy in town is particularly concerned with the dog on the east side of town, who keeps tugging at his shirt. If you investigate the dog, he will begin to bark, and run a few steps over to the right and stop. Further efforts to interact with him yield no different response. It's obviously trying to tell you something, but what? The entire northern portion of town is occupied by a structure which is apparently home to a wizard. He has covered the floor in a barrier material that damages those who walk on it without the spell of Stepguard to protect them. Even if you do take the time to explore the building, you will find that either of the two rooms toward the back are locked with a prison door to which you do not yet have a key, so you will have to remember this area and return.

What's up with the dog?
The dog knows something important, and is trying to tell you about something it found. When you talk to it, it runs over to the right and stops, facing in the direction of what it discovered. Walk in front of the dog and SEARCH the tile. You will discover the Gold Key, and will finally be able to return to all of the gold doors you have seen in the past and explore what lies behind them

[Go to top]← The Lighthouse | Osterfair and Zahan | Wellgarth and Tuhn →