After finally tracking down the Prince of Cannock and easily recruiting him to the cause of defeating Hargon, the two of you must set out to obtain the first of many keys hidden throughout the world. Rumor has it that it may be found in a cave far to the west. Before you leave, you may wish to purchase a Wing of the Wyvern if they are available in the shops.

Departing from Leftwyne, you may travel northward to Cannock Castle to restore your health and save your progress before beginning your trek. As you travel west from the castle, you may notice a monolith at the edge of the water. Some guards there have information, but don't set foot on the stairs just yet. Instead, continue your journey to the west. You will be entering new dangerous territory with another class of enemies that you have yet to encounter. Big Rats and Army Ants replace their weaker Wild Mice and Iron Ant cousins, while the first humanoid enemies take the form of Magicians, capable of casting Firebal at one member of your party. Army Ants are the first enemies which you will encounter that can summon more of their kind to aid them in a fight.

This portion of the Lorasian continent extends far to the west, but you won't need to travel all the way to the very edge. The Lake Cave can be seen long before you reach the west coastline. After crossing a bridge, you will be right at the cave entrance. Only proceed if you feel that Lars has enough magic points to successful heal your wounds, should you get into trouble. 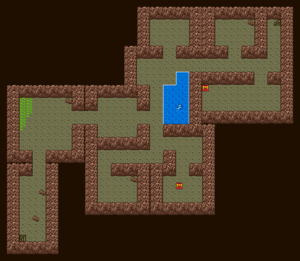 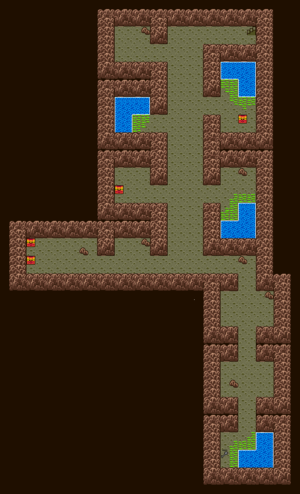 The Lake Cave is a bit more expansive than the Spring of Bravery. Encompassing two floors, you will have to investigate many different chambers as you venture deeper into the cave. You begin on the first floor. You will face all of the toughest enemies you have encountered outside, in addition to more Big Cobras. These poisonous snakes show up with greater frequency and in greater number than they did in the Spring of Bravery, so make sure you have some Antidote Herbs handy, as it's doubtful that the Prince of Cannock will have reached the sixth level when he learns the Antidote spell.

You are also likely to encounter many Magic Ants while inside the cave. These small creature pack a powerful spell, Sleep. It's doubtful that it will knock out your entire party at once, but be prepared for the worst just in case. There are two treasure chests in the top floor. The one closest to the entrance contains a Medical Herb (or an Agility Seed in the remix), while the second chest further south contains gold (or a Lottery Ticket in the remix). The stairs to the lower level of the cave are found in a chamber off to the left of the main hallway.

Traveling further into the cave, you will encounter slightly stronger monsters such as Centipods, so make sure you are familiar with the escape route if you begin to run low on health and magic. The lower level contains many more treasures. Working from the top to the bottom, you will find a Medical Herb (or a max hit point increasing Life Acorn in the remix), an Antidote Herb, and you will find gold and a Wyvern Wing side by side in a chamber off to the left. Returning to the right, you will have to travel south through a few chambers before you make your ultimate discovery: the silver key. Naturally, it is found in the deepest section of the dungeon, which means you have the farthest possible distance to travel in order to escape from the cave. Make sure you are prepared for the challenge, and run away from battles if it would ensure your survival. 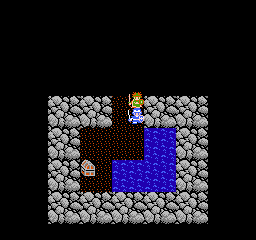 Of the few locations that you have already visited, there is little to explore with your new found item. There is a silver door in the right wing of Midenhall Castle, which will lead you to the staircase that takes you to the castle prison. Only one prisoner can be spoken with, so listen to his words before returning to the surface. Take note of this location, as you will return once you have the jailer's key. There are also two silver doors in the left wing of Midenhall Castle. You can open them to access inhabitants who also give clues. 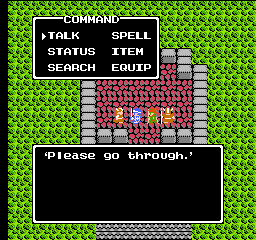 In Leftwyne, you will find a single silver door along the right side of the weapon shop. Opening this door will lead you to the first Lottery Game that you have access to. In the original game, it is hard to come by lottery tickets, as you generally only receive them from enemies or by purchasing items. In the remix game, it is far more common to find them in treasure chests, or in the various cupboards and dressers that are searchable throughout the game. The mechanics of the lottery game will be discussed in greater detail on the next page.

For now, you have accomplished all that you can on Lorasia, and it is time to venture south the Moonbrooke, home to the remaining cousin which you must recruit. Only one method is available to transport you there, and that is the cave which you can access from the Monolith near Cannock Castle.