To journey to the Tower of Wind, your next destination, you will have to detour far to the north to reach the sandy beaches of the east coast of the continent of Moonbrooke. From Hamlin, you will start by heading to the East, but avoid the first bridge that you come to. This only leads to a land locked dead-end, surrounded by mountains. Instead, follow the river north to the next bridge, and cross at this point. Then travel south through the forest and you will reach the coast line.

Travel along the coast and around the east mountain spine until you reach the forested region below. By adhering to the east coast, you will end up cross either of the two north bridges that could be seen when you were collecting the Mirror of Ra. After passing through a hilly region, you'll need to cross a series of three more bridges before you can take a nearly straight shot west to the Tower.

As you can see, it takes quite a bit of effort to reach the tower, and it will take an equal amount of effort to return to Hamlin, unless you pack an extra Wing of Wyvern, or if the Prince of Cannock has reached level 10, when he learns the incredibly useful spell of Return. In fact, if the Prince has not yet learned this spell, it's not a bad idea to spend some time leveling your party until the Prince does learn this spell. It will ensure that your party has the strength necessary to endure the challenge of the Tower, let alone the journey to reach it. 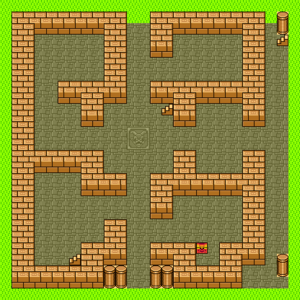 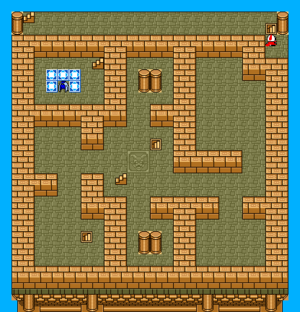 While you came to the Tower in search of a specific treasure, the Cloak of Wind, you may be disappointed to find that there is relatively little other treasure throughout the Tower. Do not anticipate building up your inventory during this visit. It is far better to come prepared. When you arrive, you will notice two staircases immediately visible from the center of the tower, along with a treasure chest towards the bottom, which contains a Medical Herb. Regardless of which of the two staircases you take, they will send you up a long ascent towards the top of the tower will will ultimately yield nothing. Either of these two staircases from the first floor are fruitless.

However, while you explore this region, you will notice other regions of the tower that you have yet to explore, including a treasure chest blocked off in its own room on the second floor. The trick to reaching these alternate sections is to explore the first floor thoroughly. If you head to the right side of the tower, you will notice a staircase tucked away in the upper right hand corner of the tower. These are the stairs you really want to climb. By embarking on the correct stairs, you will begin a journey towards your goal. A soldier waiting for you on the second floor will advise you to stay away from the edges of the tower. However, it's not always a bad idea to jump off, as it provides you with a quick and actually harmless way to exit the cave if you need to return to town and visit an inn or save the game. 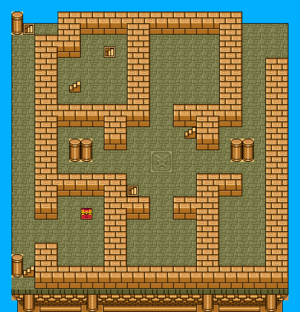 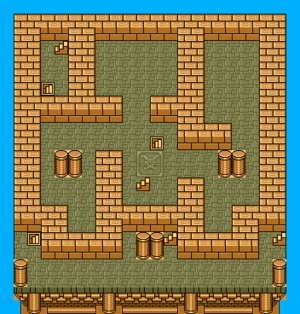 As you ascend the tower, the enemies will become increasingly tougher. The only new enemy that you will encounter here are the Ghost Rats. Don't let their relation to their weaker cousins fool you, Ghost Rats may go down easily, but they pack quite a punch. The second floor will send you across the top of the tower, while the journey through the third floor will send you down the left side, stopping along the way to open a chest with gold inside. When you cross along the bottom of the fourth floor, you will actually encounter two staircases that lead to the fifth floor. The first one that you approach is definitely of interest to you. It will take you up, and around the lower left corner of the tower to a set of staircases that wind back down to the second floor, the home of the elusive treasure chest. If you open it, you will find the goal of your quest, the Cloak of Wind. Why it is so important will become clear shortly, but its effects can be easily witnessed. Have one of your characters equip the Cloak by using it from the Item menu. Then climb up to another floor and jump off the edge. When you appear on the map again, you will have floated a short distance away from the tower rather than strictly dropping down the side and landing right next to it. This will certainly aid you in the future.

Meanwhile, if you were to climb the second set of stairs on the fourth floor and follow it all the way up to the very top of the tower, you will discover a treasure chest that contains… nothing. At least in the original version, it is empty. In the remix version of the game, you are at least rewarded with a valuable prize for scaling the tower; a Wizard Ring (Prayer Ring in the mobile version). The Wizard Ring will restore your magic points for an unknown number of usages. Every time you use it, it has the potential to break. The Wizard Ring is also a prize from the lottery booths.

Now that you have braved the challenges of the Tower of Wind and collected its treasure, it's time to venture on to unexplored lands. The only obvious choice that you have is the region to the west of Moonbrooke Castle. Rest up in Hamlin, outfit your party for a long trek, and save your game before embarking.