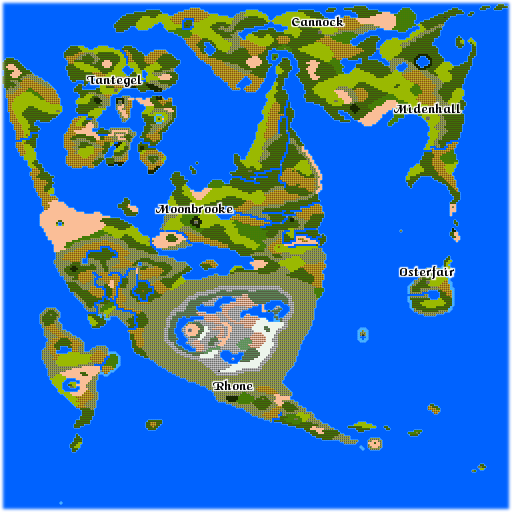 Many years ago a young warrior who was of the line of the great Erdrick came to Alefgard and defeated the dreaded Dragonlord, restoring peace to the land.

For many generations the descendants of the warrior ruled Alefgard and the surrounding lands, including the Kingdom of Moonbrooke across the easter sea from Alefgard. 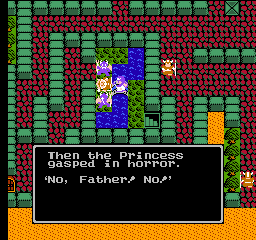 The King is defeated by Gremlins

After you begin a new game, you are presented with a peaceful scene during a fateful day in the Kingdom of Moonbrooke. The king and the princess are enjoying the peace just before it is suddenly interrupted by the appearance of Hargon's minions. A Moonbrooke soldier runs to inform the king of their appearance before he is struck down by a Gremlin. Placing himself between the Gremlin and the Princess, the king attempts to protect the Princess and defeat the Gremlins, but they eventually overwhelm him in number, and the king of Moonbrooke is defeated. With his dying breath, he orders the Princess to run and find a safe place to hide. 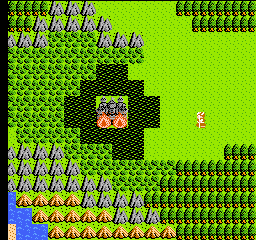 Shortly after the fall of the king, the kingdom is descended upon by Hargon's forces. Slaughtering one guard after another, they raze the castle and begin to set fires in various locations until ultimately, the kingdom is engulfed in flames. One soldier who has witnessed this horror realizes that resistance is futile, and the only way to prevent future devastation to other kingdoms is to escape and warn them as quickly as possible. Striking the last Gremlin that gets in his way, he reaches the outer gates, and pauses one moment longer to see the kingdom burning before setting on his way to Midenhall. 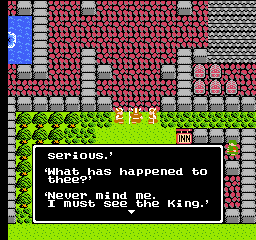 A wounded soldier arrives in Midenhall

The journey between Moonbrooke and Midenhall is long and dangerous, and even the most seasoned soldier can not make it without difficulty. Injured and weary, the soldier finally arrives at the gates of Midenhall and collapses. Aided by the soliders of Midenhall, he indicates that his injuries can wait; he must communicate an urgent message to the King of Midenhall. Leaning on the other soldiers' arms, he limps to the steps which lead to the king's chamber. Once inside, he informs the king of Hargon's attack on Moonbrooke, and swiftly passes away. With this grim news, the king of Midenhall knows only too well what must be done; his son, the Prince of Midenhall, must locate and team up with his cousins. Only those directly descended from the line of Erdrick have any chance of defeating Hargon and saving the world from his tyranny.