In order to fully explore the Ice Cave, you will need to collect monster medals for 155 monsters. For each monster, you can either collect a Bronze and Silver medal, or alternatively just collect two Bronze medals and then trade them for a Silver with the old man in the cave. Either way it takes a very long time, but getting two Bronze should still be quite a bit faster than trying to get both Bronze and Silver. See the Monster Medals appendix for really useful tips about more quickly collecting monster medals. 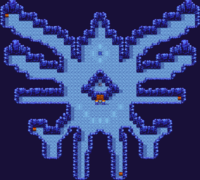 Once you've chosen the secret wish from Divinegon, then you can head to Leiamland Shrine, a short distance north of Noaniels. A new warp gate will be where the Egg originally sat. On the first floor, random enemy encounters can include several of the game's previous bosses, as well as other odd enemies such as Cannibox and Mimic. The presence of these particular bosses and monsters is actually important, because most of them can only be found a finite number of times elsewhere in the game, and therefore you wouldn't be able to obtain their monster medals if it weren't for these random encounters in the Ice Cave. 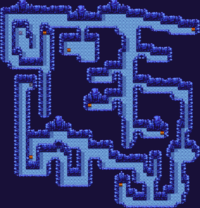 You will find four Chests on this Floor. They contains one Mimic,

To get pass the Bronze Gate you need to talk with the old man guarding the Gate and show him proof you've collected all Bronze Medals from 001 until 155. Once you got all 155 Bronze Medals, you can pass the Gate and go to the next Floor.

On the second Floor you will then meet 10 new monsters, never seen before anywhere ingame. Like the Dorasbox the tougher brother of Cannibox and Mimic or 2 new Dragons besides the Green Dragon. Of course asides of the new monsters there are also some known monsters walking around like Metabble and BaraEvil.

Before going east go west first to the first of seven Chests found on the second Floor. It has a

. Now go east and south for another chest with

LifeAcorn. At the next crossing go east for a

in the chest. Go south and ignore the 3 first branches and enter the left and right branches after that for

. On third Floor go right to get

STRseed from the Chest and go left along before a imposant scenery to the fourth Floor. 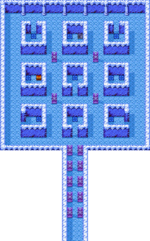 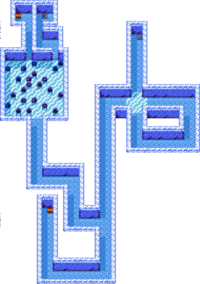 A old man is guarding the Silver Gate and wants you to show him Silver Medals from 001 until 155. The 10 new monsters aren't included since they carry the numbers 156 until 165. Once you've collected all necessary Silver Medals (or, as mentioned previously, collected two Bronze and used the old man's offer to trade for Silvers), he will let you pass. The Chest in next room contain

. The Room ahead is like a maze. To get the Tiara from the Chest you have go a long way walking around finding the right path to the Chest. Once you've cleared the maze-like room you will be in a Room with many Warps.

. Now take the Warp in the middle room which leads to the Floor below. Some of the Grounds is icy, so you must go around to get crossed on the other Path. Go south first to get

from the Chest. You will soon come to a icy room. Try to get to the left room with a Chest. It has a

STRseed. That is the last Chest found in this Dungon.

Take a deep breath and venture in the last Floor where the boss resides.

GranDragn has 10,000 HP which is about 3000 more than Divinegon, but his attacks generally aren't as powerful. Since he possesses similar spells, you can use a similar strategy, for example spamming Thordain and BlazeMost, making use of Bikill/TwinHits, and healing yourself with SageRock or HealUsAll until GranDragn is down.

For your Victory over him you will receive

which is the strongest weapon in the game. You can also use it as an item in battle to cast Thordain. If you fight GranDragn again and defeat him in under 25 Rounds, then he will hand out a set of medals of himself.

Maybe the next Goal to achieve is to get all Bronze, Silver and Gold Medals of all 165 Monsters. This is far tougher than fighting GranDragn and so time consuming that you could instead beat Dragon Warrior III ten times over. So, what are you waiting for?