Green text on this page indicates that the information is exclusive to the GBC and SNES versions. 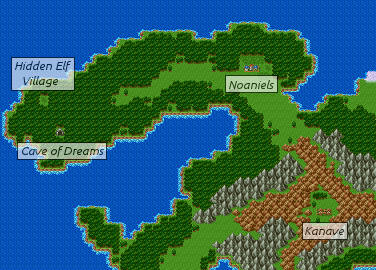 In the northern reaches of the continent, above Kanave, you will find the sleepy town of Noaniels (in what would be considered that world's version of Norway) that is literally asleep. You will hear rumors of this tragedy in Kanave, but it must be seen to be believed. The spell was cast on this town by the angry Queen of the Elves who sought retribution on humans for the "abduction" of her daughter by a human lover. Only one object can be presented to the queen to soften her resolve and provide you with a powder that will undo the spell, but you'll have to explore a vast cavern in order to find it. 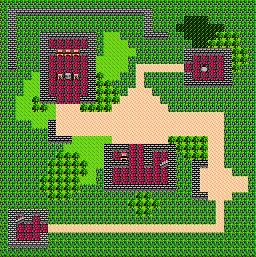 Just as predicted, when you arrive in Noaniels, everyone will be sleeping. It will appear as though everyone went to sleep right on the spot in the middle of their daily routine. No attempt to awaken them will work. While the town sleeps, you can't make use of their inn or shop either. There is, however, one inhabitant who was either unaffected by the curse, or perhaps out of town when it occurred. He resides in the small house in the lower left corner of town. Speak with him, and he will insist that you find the Dream Ruby and return it to the Queen in order to convince her to lift the spell. Time for Treasurehunting. Go from the Entrance North and enter the House and check the pot for

Strength Seed. Go west and search a old man in blue near a small Wall. Search behind the Wall for a

Pachisi Ticket. Go up the stairs in Inn and check the cupboards there for

Full Moon Herb. In the old man house is an

Agility Seed in the pot and

Tragic Tale in the right bookshelf. With that, you should depart and head for the west.

The Village of Elves (Elvenham)[edit] 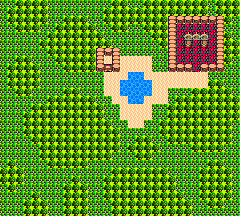 Although the Village of the Elves (Elvenham) is considered hidden, in that it is not marked with the usual town icon on the map, it should be fairly easy to identify as the unusual look tile found in the middle of a forest, to the north of a cave. Once you step on this tile, you will find yourself at the entrance of the Village. It will become immediately clear that the Elves want nothing to do with you. The owner of the shop will refuse to sell you anything from her list of interesting items. If you intend to shop here, you're going to have to find some other way of convincing them to sell to you, but it will be some time before a means becomes available.

Only two people will provide you with meaningful discourse. One is the father of the man who ran off with the Queen's daughter, and he has been trying in vain to get the Queen to reconsider the casting of her curse over Noaniels. The other is the Queen herself, who harbors much anger towards humans since the disappearance of her daughter, and the Dream Ruby. With no other options to explore, it is time to leave the village, and plunder the cave to the south. Go the small Path just before the Queen left and check the northest Spot for a 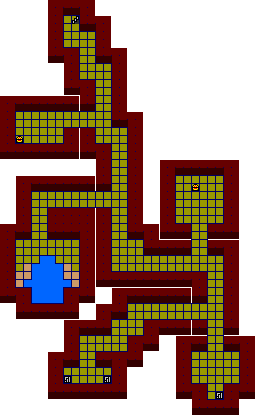 This cave, though not tremendous in size, is still quite large, and contains a good number of monsters who can slip through your defenses if you're unlucky. Madhounds/Rabidhounds cast Defense and allow enemies to do more damage to you. Vampires can cast IceBolt and do a good amount of damage to even heavily armored party members. But the worst by far are the packs of Deadly Toadstools/Deadstools/Toadstools who can put your party to sleep and continuously damage you until someone wakes up.

From the entrance, start heading south along the path. You'll pass a door on the left. Step inside to find a chest with a Wing of Wyvern (288 gold) inside, just in case you need a quick trip back to civilization when you step outside. Continue along the path, and you'll pass another door on the left. Inside, you'll find a man standing next to a small pond. The pond serves no purpose, but the man will tell you that there's a healing spring inside the cave somewhere. Continue along the path as it bends to the right. Investigate the door to the north to find a treasure chest with a good amount of 288 gold (

Holy Water) in it. Then head south along the path until it branches to the west and south. 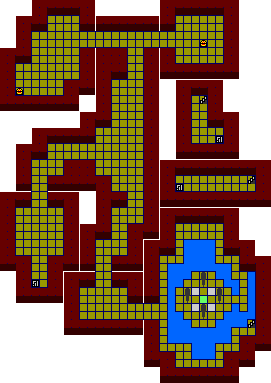 Follow the southern path, and you find a stairwell that goes down. Take it, and you'll enter a very small room with another staircase. Climb down that one, and you'll be in a small enclosure with a bit of water and a treasure chest. The chest will contain the Acorn of Life (

Small Medal), and it would be a good idea to provide that to which ever party member has the lowest maximum hit points. On the opposite side of the room is another set of stairs leading back up. Climb them to find another very small room with a flight of stairs that will take you back up to the first floor of the cave. This will deposit you on the right stairwell of the room with two sets of steps. Cross the room to the left stairwell to explore the first basement level proper.

The stairs will drop you off at the bottom of a water filled room. In the center of the room is a rather ornate set of stones and tiles. Take the time to walk around the edge of the room to reach the middle and step on the center tile. The screen will flash. You have found the healing spring. It restores all lost HP and MP of any living party member. Remember this location as it will be a useful place to return whenever you're in dire need of healing. Step outside the room to the left, and head north. As you follow the path up, there is a door on the left. Skip it for now and continue to the top, where you'll find a door on the right and the left. The door to the right leads to a room with a chest that contains a

Strength Seed. Give this to a non-spell casting party member with the lowest strength. You may optionally cross over to the left and open the chest to discover a Magic Knife (

Iron Spear). With those rooms cleared, return to the entrance you passed and explore it now. Follow it to the room below and take the stairs down to the next basement level. 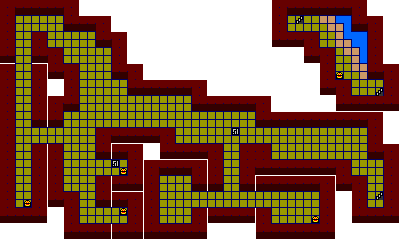 This floor stretches out to the left. Follow the path until you reach another set of stairs. If you take these stairs, you will climb down to the third basement level, but it will be an empty section that is cut off from the rest of the level. There is a path below these stairs, however, with a door on the left and right. The room on the left is empty, but the room on the right contains a chest with a bit of 80 gold (

Silver Rosary). Continue exploring left from the steps, and the map will open up in many directions. Follow the southern wall around, and enter the first door on the right. There, you will find a treasure chest containing Fairy Water (

Leather Dress), and set of stairs leading down. Take the stairs to the floor below, since the other two chests on this floor can be searched on the return trip. 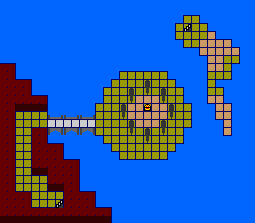 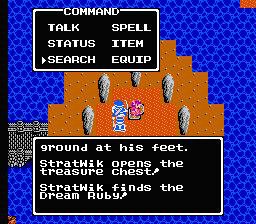 You will arrive at the bottom of a small path that leads to a bridge. Across the bridge is a small island surrounded by rocks with a chest in the middle. Approach the chest and open it to discover the

Dream Ruby, with a written message. Then turn around and climb back up the steps. Back in the second level basement, there are two more treasure chests to discover. One is directly south of the steps you recently climbed, which will have a small amount of 48 gold (

Pachisi Ticket). The other chest lies to the left of those same steps, through a door, and down to a dead-end with a chest that contains a descent amount of 224 gold. Once you collect that, there is nothing else to discover. At this time, you can make your way back to the healing spring before exiting the cave, or, if you're lucky enough to have a spell-caster with the Outside spell, you can use that to immediately return to the outside.

Returning the Ruby to the Queen. 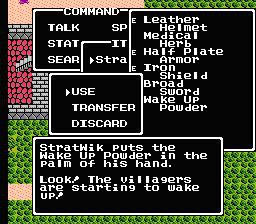 Using the Wake Up Powder.

With the Dream Ruby in hand, return to the Elven Village, and speak once more to the Queen. She will recognize the Dream Ruby, and learn of the fate of her daughter and lover, who drowned themselves in the lake out of desperation. Heart broken, the Queen will recognize the error of her ways and provide you with the Wake Dust / Wake Up Powder. It is up to you to return to Noaniels and sprinkle the powder around town. Travel back to Noaniels and use the Wake Up Powder. Just like that, all of the citizens will wake up from their long sleep. Some will wonder how much time has passed, while others will scarcely notice a difference.

With the curse lifted, you can finally take advantage of the inn and the shop in Noaniels. The Cloak of Evasion is a good defensive upgrade for any spell caster, and the Wizard's Wand is a useful weapon for those who can't do a lot of damage in combat, as it can be used to cast Blaze as often as you like, with no cost in Magic Points. Furthermore, you can pick up some useful information here. You will begin to hear about a town called Assaram. The most interesting piece of info can be obtained from the second floor of the inn, where an occupant will recall Ortega, your father, staying at the inn just before leaving for Assaram to find the Magic Key. He must have left the town shortly before the curse was cast. Ever in your father's footsteps, the time has come for you to do the same. Return to Romaly and prepare to explore the regions to the east.