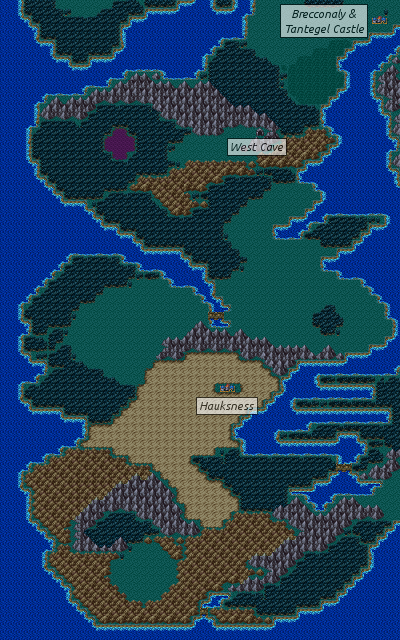 Green text on this page indicates that it is exclusive to the GBC and SNES versions.

In the future, a lone warrior is far more likely to visit the towns to the east of Tantegel (Ludatorm) before they ever make their way down to Hauksness (Domdora). However, in this day and age, the land bridge connecting the east to the rest of Alefgard is missing. You can certainly hop on your ship and sail around to it, but before you consider that route, it may just be easier to travel down the west side of Alefgard instead. When you reach the southern desert, you will get to see a town as it existed before a terrible calamity destroyed the town and turned it into a wasteland. Beyond this thriving desert town is another town nestled in a pocket of mountains. Whereas this town is a bustling economy in the future, hope has dwindled to a minimum and all of the merchants spend their time gambling instead of working. Even with fortified walls, the citizens don't feel that they have enough protection from the powerful monsters that roam the wilderness outside. Someone has begun researching a way to boost the town's security. Finally, a cave can be explored for any treasures it might hold, but you may find that the battle experience you gain is worth more than any of the items it contains.

Making your way down to Hauksness (Domdora) from Tantegel (Ludatorm) is straightforward. Compared to the first Dragon Warrior, you can no longer walk far to the west and take a bridge to access the southern regions of Alefgard. Instead, the mountain chain south of Tantegel (Ludatorm) no longer blocks you from accessing the land on the other side. You can cross the hills and slip below the West Cave, and continue on your way. Before you cross a bridge, you will mostly encounter Boss Trolls and Vile Shadows, mixed with a few Slimes and Goopis. Once you cross the bridge, you will be entering Wyvern territory. The fire breathing Wyverns of the past are not terribly strong, but they're not the pushovers they presented themselves to be in the first game either. A group of three or four of them could spell trouble for a lower level party. 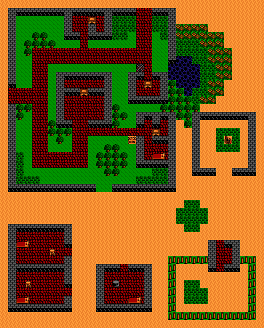 You now get to witness Hauksness (Domdora) in its former glory, before it gets destroyed and ravaged by the forces of the Dragon Lord. It's quite a bustling town with a few shops. However, one merchant is preoccupied with thinking of a name for his new baby. The equipment shop in the middle of town does sell a useful shield, the Shield of Strength (Heal Shield). When used in battle, this shield heals the user. It also has the incredibly expensive and equally useless Revealing Swimsuit (Tight Bikini).

Other than one man indicating that Oricon may be found nearby, you will learn little of use inside the town walls. However, Hauksness (Domdora) is more than just the well-built section that you arrive in. More activity can be found through a gap in the south wall. In the enclosed building, a man indicates that something called the Sphere of Light (Light Orb) can be found in your original world. West of it live a old man. Check his bookshelf and pot for a

Small Medal. And a woman standing by the well to the east of town says that she say something glittering in the pasture. Go down the well and search southwest of the small pond there for a

Orichalcum), an important item that you will need to hang on to for later. Once you've found it, prepare for a journey along Alefgard's southern region. Check the right horse stable for one more

Enter the house north of the Inn and go upstairs. Get the

Pacifier fromt the dresser. Go upstairs in the Inn and get the

Bunny Ears from the dresser. Talk with Lena and she will ask how the dancer group in Ashalam is doing in which she once was. If you return to Ashalam at night, tell the Dancer's Leader that Lena is doing well. He will thank you and give you a 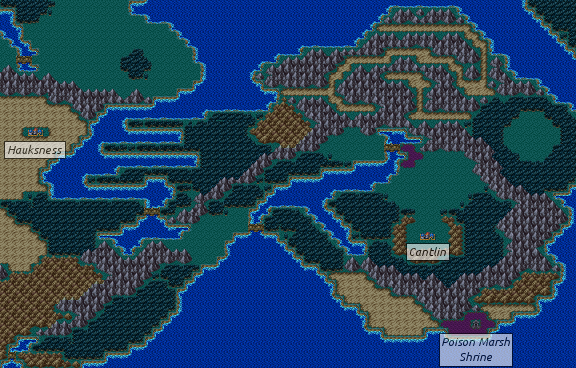 There are two means of accessing the southern region of Alefgard. One is a bridge that lies south east of Hauksness (Domdora), and the other is through a narrow passage of hills along the southern coast. While taking the bridge may seem easier, it actually bypasses the more interesting features of the region. Instead, it takes you above a mountain chain that separates you from the nearest civilization in Cantlin (Mercado), and allows you to proceed to the eastern region of Alefgard.

Travel down through the mountain pass along the southern coast. Then follow the coast and the terrain north east. In addition to all of the monsters you've encountered so far, you are likely to run into Voodoo Warlocks/Voodoo Wizs, and Magiwyverns/MagWyverns will appear their regular cousins. Follow the terrain until you see a bridge leading east. Cross the bridge if you wish to visit the Poison Marsh Shrine first. Otherwise, continue above the bridge until you reach a second bridge. Cross that bridge into a small section of marsh, and then travel south to reach Cantlin (Mercado). 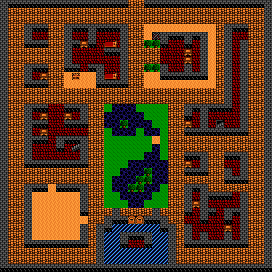 If you were expecting a mythical creature to be standing guard in front of Cantlin (Mercado), you will be disappointed, although one citizen is contemplating the idea. Cantlin (Mercado) of the future is loaded with merchants, selling items of every kind. Cantlin (Mercado) of the past looks deserted by comparison. One guard in town claims that the people of Cantlin (Mercado) have become so dispirited because of the Archfiend that they've closed their shops. The inn is open, and it turns out that Garin is staying there. He mentions that he left his Silver Harp at home, despite claims to the contrary by his father. Check the cupboard next to him for a

You'll find a staircase up to a set of apartments above one of the shops on the left side of town. Everyone has decided to stay in their rooms out of fear of the Archfiend. Check both cupboards for

Party Dress. One gentleman is inspired by these events to construct a monster that will defend the town, and decides to name it Golem. Check all 5 bookshelves for:

Defy Book. The large building in the center is actually a roof over a tranquil park. Inside is a man who advises you to visit an old man at a shrine. Walk through the bottom of the park to reach an enclosed section. Two doors block the way to a man surrounded by Barrier tiles. Open the door and cast StepGuard before speaking with him. He tells you the three items you need to reach the Archfiend: the Stones of Sunlight (Sun Stone), the Staff of Rain (Rain Staff), and the Sacred Amulet (Holy Crest).

There is very little else to see or do in Cantlin (Mercado), but it does have one more feature: a Gambling Hall. Just like the ones found in your world, these halls allow you to place bets on who will win in a battle between various monsters. You'll find this hall no different than any other, except for the fact that you may see different monsters and the bets are more expensive.

Check the ground in the northwest most building for a

Small Medal. Next search in the middle of the southwest most building for a

Wizard Ring. Now search the small table in southeast most house for a

Explore the shrine for the Staff of Rain.

There is an important shrine for you to visit that lies south of Cantlin (Mercado). Unfortunately, there's is a chain of mountains between Cantlin (Mercado) and the shrine, so you will need to backtrack to the first bridge that you saw and cross over it. Along the way, you may encounter some of Alefgard's tougher monsters, including the frost breathing Scalgons/Skullgons, or the ferocious Darthbears. Keep your party healed at all times just in case. (Alternatively, you can sail your ship along the western and southern coasts of Alefgard to reach this shrine.)

After crossing the bridge, follow the southern coast until you reach a patch of poison marsh. The shrine lies in the middle of the marsh. Walk to it and enter inside and go up. You will find a beautiful room filled with flowers. The person sitting in the middle of the room will welcome you, and simply present you with the Staff of Rain (Rain Staff), no questions asked. Once you collect it, you are finished and free to leave. Check the "Cross" before the throne for a

Small Medal. Search with help of Seek Out northeast in the flowerbeet for a 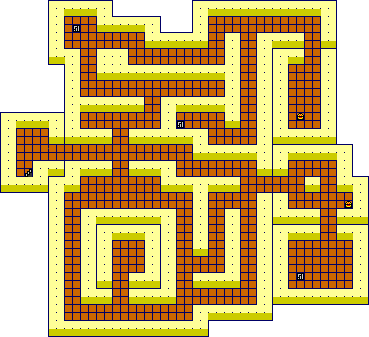 There's just one more location that you can visit along the western region of Alefgard, though it is by no means necessary. You may wish to explore the West Cave out of curiosity, or for more battle experience, but nothing you find in the cave is vital to your quest. The entrance to the cave is a short walk south west of Tantegel (Ludatorm), or directly south of Port Island.

This cave has a good number of dead-ends and empty sections. The walkthrough described here will take you through the minimum steps needed to examine all of the treasure chests found in the cave. The first floor contains two treasure chests, and three stair cases that lead down to the floor below. However, the two staircases found in the corners lead to closed off sections of the bottom floor, and are of no use to your exploration. 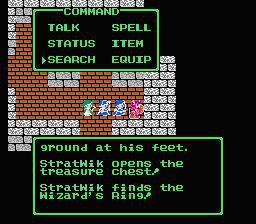 There are only a few useful treasures.

From the entrance, walk to the right and continue walking along that path for as long as you are able. When you see the path continue into some blackness, follow the path into the next room. There, you will find a treasure chest with a

Wizard's Ring. Collect, and head back toward the entrance. As you walk back, take the path that leads up when you get the chance. This will lead you to the stairs in the upper left corner, but ignore them. Instead, walk to the right for as long as you can until you are forced to head down into a new room. In this room, you will find another treasure chest, this time containing 1016 gold.

From this room, walk back up, and follow the first corridor that leads down. It will bend to the left and take you to a set of stairs which are the only true way to explore the second floor. 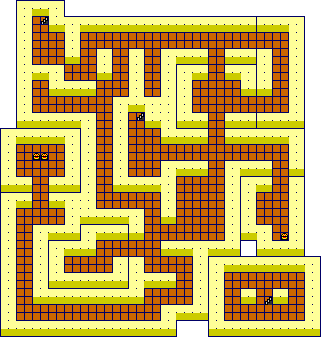 From your arrival on the second floor, exit the room through the right and walk through in intersection. Follow the path to the room below, where you'll find a treasure chest that contains an Invisibility Herb (

Small Medal). Then exit the room and return to the intersection. Travel down and to the left, and then down once again as the pathway winds around until it leads to the left. Follow the path as it bends back up to another room.

Enter the room and you'll find two treasure chests. The left one is a Mimic (

Sword of Destruction), and you must decide carefully if you wish to take it on. The right treasure chest contains armor, but it is the Armor of Hades (

Devil's Armor). While this is the most defensively powerful armor in the game, it is cursed and renders its wearer immobile. Equipping this armor is not recommended.

If you have examined these five treasure chests, then you have found all that this cave has to offer. You can walk back to the entrance, or cast Outside, or simply wander around to obtain more experience points.