When you create a new party, you have to use one of each of the four classes. The characters order will remain the same through all the game. A strategic setup could be the following:

Characters have no default names.

For a sense of continuity, you could use the names of characters from the other games in the series:

Since the authors of the game are the same number as the party members, you could use their first names (they are all males) for male characters and their family names for female characters.

Each character has five attributes that the player can assign to them, plus Luck/Fortune (determined automatically).

Different versions of the manual give different explanations of the attributes. In many cases the "explanation" explains nothing: such instances are in italics. Note that the three explanations of Constitution/Physique are completely unrelated to each other; either at least two manuals are wrong (or maybe all three; never trust a manual!), or this attribute was modified in the different ports.

The SNES manual actually gives explanations for some attributes, if it can be trusted:

Dexterity (agility) and Intelligence are left unexplained in every manual.

From analogy with earlier famous role-playing games, the following hypotheses can be assumed:

If anything, the original French manual gives the most precise guidelines for character creation. Still, Constitution/Physique remains undetermined.

The following diagram summarizes the characteristics of the four classes; they are analogous to other role-playing games. It is actually based on their magic abilities. 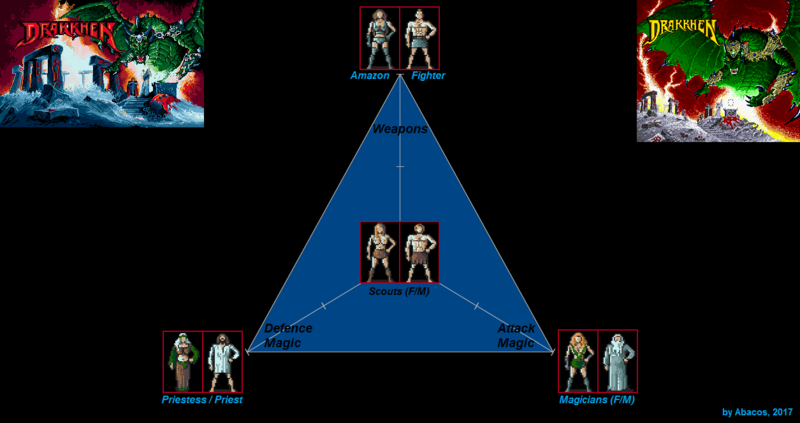