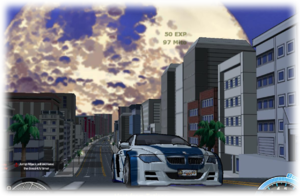 An example of the game environment during Undercity

Undercity (often abbreviated to just UC), implemented in the US version of Drift City as of v0.11j, is an instance dungeon game mode that pits a group of 2 to 4 players against a series of challenges in a heavily teamwork-oriented environment. Undercity is only available as a party, and all players must be in the same city and gate to initiate the game mode. It is playable in Moon Palace and Koinonia in the US Drift City, however in some other regional versions it is also available in Cras.

Undercity takes place in a carbon-copy of the normal "overworld" city, with the exception of no traffic cars. In addition, the whole map is in constant darkness, with the sky featuring objects such as moons and large, coloured aurorae. The sky changes in each of Undercity's main "phases" (mentioned below), and serves as an indication of the user's progress to completion.

After all players have fulfilled the requirements in this article's introduction, one member of the party must find and enter a portal-like object, which is marked on all players' maps as a pink house with the letter "U". This player will receive a prompt, and when he/she confirms the initiation of Undercity, a prompt is sent to all other members of the party, no matter where they are in the city. The game mode begins only when all party members confirm the request.

Undercity has four predominant "phases" or "rounds" which the group must complete. The challenges in each round are different, but all require good teamwork between party members to accomplish effectively. It should be noted that upon starting Undercity, the user's in-game chat channel is automatically diverted to party chat.

See the video at right for a more illustrative description of the introduction to Undercity.

Undercity begins with the user being shown (seemingly live) footage of large, four-footed rocket-shaped robots referred to as HUBs in various locations in the city. The user sees two types of HUBs; blue ones that move, and a stationary red HUB. The user is also shown a jump ramp in close proximity to the red HUB, indicating a link between the ramp and red HUB.

The HUBs you see are devices that have stolen the Undercity's secrets, spied on the civillians, and harassed the government. We must destroy them all.

There is a brief countdown and all players must set about destroying the 100 HUBs. This is the only round with no time limit, and all HUBs are marked on the user's map.

There are 90 blue-coloured HUBs on the map. Blue HUBs oscillate between two intersections of road at approximately 80 to 90MPH. Their movement is regular and predictable, and the user must simply drive into the blue HUB to destroy it.

10 of the 100 HUBs are special red HUBs. They differ from the blue HUBs because (other than the fact they are distinctly a different colour) they are stationary. In close proximity to each red HUB is a jump ramp. Although the red HUB can be destroyed by driving into it, like the blue HUB, using the ramp to jump and hit the HUB while in mid-air will bring up a message:

The time limit has been increased!

On destruction of all 100 HUBs:

Good Job! I still can't believe you destroyed all of the HUBs. Let's move on to the next mission area.

Now is the time to destroy the Main HUB located at the end of the city. The Main HUB's shield will be removed if you destroy the Barrier HUBs. Damn! Our strategy has been revealed! You must destroy it before it fully activates.

Once the group has destroyed all 100 HUBs, they are returned to their original starting position, this time with the mission of destroying the Boss HUB (not to be confused with the Boss HUV, which is coming later) located at the other end of the city, within the time limit of 2 minutes, 20 seconds (for Moon Palace). However, the twist to this seemingly simple task is that the Boss HUB is shielded by a number of Barrier HUBs located at strategic points around the city. The team must destroy all Barrier HUBs and finally the Boss HUB before the time limit is up.

Good teamwork is crucial for success in this "phase", and although the number of Barrier HUBs changes with the number of party members (ranging from 5 HUBs for a party of 2, up to 15 for a 4-person party), a common strategy employed during this round is to have one member of the party (typically the fastest) devoted to the sole task of attacking the Boss HUB. To complicate things further, as the user approaches the Boss HUB, he/she encounters numerous waves of guard bots, which block the main routes to the Boss HUB. Although avoidable to some degree, they cause a dramatic decrease of speed when struck.

We have failed to accomplish our mission. But we can't give up now. I've transmitted the jamming signal for the Main HUB, please try again.

After completion of the previous round, the group is immediately thrown into a series of HUV chases. The HUVs spawn in waves of 4, 6, 8 and finally 10 HUVs. Like with normal HUV chases, the user must hunt down and ram the HUV until its HP bar is depleted and the HUV gets destroyed. The time taken to destroy the HUVs resets and increases each round (in a party of 4 in Moon Palace, users have 3:30, 4:00, 5:00 and 6:00 to destroy each successive wave) and increases with the less people in the party. If all HUVs are not destroyed by each time limit, the next wave will appear anyway, and the group must destroy the new HUVs as well as any HUVs remaining from previous waves.

After the final wave of HUVs, a Boss HUV will appear at a random location on the map. Depending on the city, the Boss HUV can be one of three boss HUVs, unique to Undercity (i.e. they are not the same as the Boss HUVs found in Rush Time).

If the time limit for the final wave of standard HUVs expires, the remaining HUVs will periodically sacrifice some of their HP to restoring the HP of the Boss HUV. The more HUVs are remaining, the greater the healing effect. In addition, if the Boss HUV is left undamaged for some time, even with all normal HUVs destroyed, it will slowly regain HP.

An interesting feature of Undercity's Boss HUV fight is the presence of a Battle Zone-like damage bar, which depletes by striking the Boss HUV when it is protected, hitting walls and objects on the footpaths (Koinonia only) and striking objects dropped by the Boss (if any). The bar recovers slowly, and when it depletes fully, the user must "repair" in the same manner as "repairing" in the Battle Zone.

Depending on how many red HUBs were successfully jump attacked during the first "phase" on Undercity, the group will have somewhere between 10 and 16 minutes to destroy the Boss HUV.

Upon success, the user is shown a screen showing his/her party's performance and spoils, then returned to wherever he/she was before he/she started Undercity.

The Hover Detatcher is the Boss HUV of Moon Palace Undercity. It appears as a large, grey landing craft which hovers slightly above the ground. Periodically, the Hover Detatcher will rise up and drop a group of pellet-shaped objects which form a random arrangement across the road. Striking these pellets causes significant depletion of the durability bar, as well as a reduction in speed.

In addition, the Hover Detatcher can defend itself by creating a ring of electricity on its 5 protruding discs, which tosses users' cars up in the air (not dissimilarly to Rush Time bosses), temporarily halting any attack.

The Double Upset is the Boss HUV of the Koinonia UC and actually appears as two identical, yet separate bosses with shared HP. The individual units appear to be two cars with wheels whose diameters are larger than the total height of the body. This allows the Double Upset to flip over and reverse its direction of travel with little to no warning. Both bosses feature a light "side" and dark "side" - distinguished by paint job - which serve as queues as to when to attack the boss. Striking the light-coloured side deals normal damage, while striking the dark side will only deal 1 or 2 points. It is believed that while one Upset has its dark side up, the other is light side up, meaning that to avoid the boss reviving, the Undercity team should split up and damage both bosses.

To complicate matters further, both Upsets are able to temporarily reverse the left and right input of any players nearby. There is no real indication as to when the ability is about to be invoked, but a user whose inputs are reversed is signified by a series of emoticons which revolve above the player's vehicle and gradually fade away as the effect wears off. The effect lasts between 5 and 10 seconds. It is important to mention that in Koinonia Undercity, striking walls and stationary obstacles depletes the damage bar, unlike in Moon Palace, making stopping to repair generally more frequent. 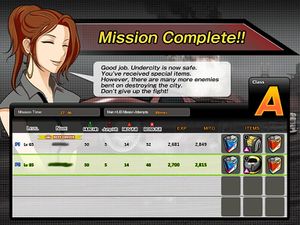 The rewards screen after Undercity

Generally, undercity rewards generous amounts of experience points and mito (the in-game currency), as well as some special items. The exp and mito reward can be increased by possessing the Undercity 120% item, which can be obtained by winning Virtual HUV.

In all non-Korean versions, N, S and H Mittron Enhancers are rewarded depending on each individual's performance and level. In addition, for successful missions, a part from the Shinoya Alpha or Beta set (for Moon Palace UC) or Double Alpha or Beta set (for Koinoia UC) is awarded. These four sets have powerful properties, such as increasing HUV chase time by 5 seconds, or permitting the use of the Sudden Boost after Drift effect, as well as awarding a stats bonus for equipping all 4 parts simultaneously. Unfortunately, some of the parts must be refreshed with Alpha or Beta Part Lube to retain the set effect. Sometimes a random N, S or H part is awarded for poor performance.

In Skid Rush, since their part system differs from other versions of Drift City, Undercity rewards Liquid Mittron bottles, "classic" Mittron Enhancers and Part Crafting Gems, which can be used to create Shinoya or Double set parts.

Typically, the highest reward goes to the user who contributed the most to completing Undercity, highlighted as the "Best Driver".

Completing Undercity for the first time unlocks the coupon for the Monster V4, and completing 100 Undercity quests unlocks the Undercity Guardian License, which increases EXP yield from future Undercity missions by 5%.