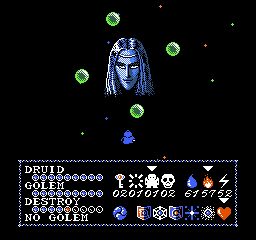 In the FDS Version, after destroying the skull on the eighth floor, a stairway will appear below the skull. After you enter the stairs, you will be asked to flip the disk to side A. The game will load and when it finished, you will be standing in a pitch back room as a face materializes before you. This is the first phase of the boss battle. This face is invulnerable to your attacks. However, it will create four orbs which rotate around a common point. These orbs can be destroyed by your attacks, and you must remove all four to enter the second phase of the fight. While you can shoot at them with your magic, the best approach is to summon a Golem and set his mode to Attack. He will proceed to crash into each orb until they are removed. 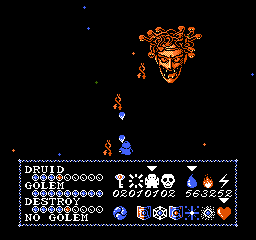 For the second phase, the face will transform and take on a more Medusa-like appearance. It will oscillate around the room, and it will shoot what appears to be entwined snakes at you. You can remove these snakes with any kind of magic, and magic will now do damage to the face as well. You must hit the face with twenty shots of magic, but casting Chaos twice will also destroy the boss. The best strategy to employ in this phase is to use a Golem as a shield. Stand on the far left or right side of the screen, and have the Golem stand in front of you, shielding you from the snakes while you shoot forward. After you hit the boss twenty times, it will explode, and you will receive your rating, and one of the three possible endings.