Pogo down the steps at the start, taking out the cave slugs on the way down. Swing at the rock ahead to defeat the big bat while it sleeps. Following this, you should see a chest that's too high for Scrooge to reach. Jump around to reveal some hidden chests that can act as stepping stones, and open them all to increase Scrooge's wealth. Proceed further and the nephews will point out that the lift is missing its key. Walk past it, swinging another rock at a bat (there's an ice cream under one of the rocks here if you need a health boost) and opening the chest past it for an invincibility coin on Easy and Medium. At the end of this path is a chest containing the key. Return to the lift for another short scene, after which Scrooge can begin his descent into the mines. 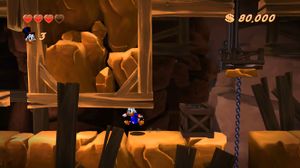 To the left here is a Heart Container on Easy/Medium. Mrs. Beakley can be found to the right.

After the lift has stopped, walk into the left wall to reveal a hidden path. Here is a chest containing a Heart Container on Easy/Medium and a treasure worth $1,000,000 on Hard/Extreme. Return to the lift and take the right path this time. Here, you can find Mrs. Beakley. After collecting the goodies, you can continue to the right for some treasure (pogo onto the merducks to cross the water). Once everything here has been collected, return to the lift and drop down the pit below it. Jump by the wall to the right to reveal a hidden diamond, and continue to the left to initiate a boulder chase. You'll have to pogo past some slugs and pits, but barring a major accident, the boulder should be easy enough to avoid. 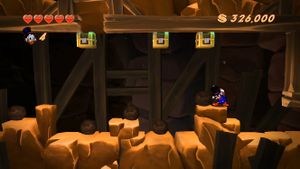 Jump up to reveal these chests by the ceiling, and break them open by swinging rocks at them.

Climb up the chain past the plant to proceed to a new area. Climb up another chain and you should see a chest up above. Pogo to it and swing at it to earn a red diamond. To the left is an area filled with rocks. Jump up near the ceiling to reveal a multitude of hidden chests that Scrooge can swing the rocks at. Past the chain, you can pogo by the left wall to reveal a hidden diamond. Once everything here has been collected, drop down and proceed down the path to begin another boulder chase. Simple run down the steps until you can exit the screen, after which Scrooge will automatically dodge the boulder and open up a path further down. Drop down the newly-created path and you should find yourself in a cave-like area.

Pogo by the wall to the left to reveal a hidden chest, and swing the nearby rock at it to open it. Continue right past the large pile of rocks. You should notice some bubbles popping out of the water below, indicating the presence of a merduck. Pogo past the many merducks in this area, and stop only when you see a big bat, as you can swing a nearby rock at it to defeat it. Past another merduck is a chest too high to reach; again, you can jump around to reveal a hidden chest that will allow Scrooge to reach it. By the ceiling to the left of the next rock is yet another hidden chest. Proceed past a couple of more merducks until you come across a pit. Drop down it to descend even further. 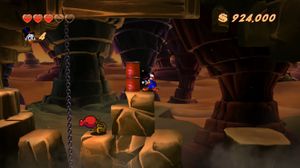 Swing at these oil drums to crush the carnivorous plant.

Proceed to the left to initiate another simple boulder chase. Past the path that the boulder creates is a mine cart sequence. Unlike the mine cart sequences in Transylvania, Scrooge will not have to jump to avoid falling to his death at the end of this one. Instead, it will trigger a scene. Following the scene, pogo past the first plant and keep swinging at oil drums until the second plant has been defeated. Drop down the pit to encounter more plants. Swing at a rock to take out the plant to the right, allowing Scrooge to safely access the chest. Then, take the lower path by swinging at the blocks to destroy them, then swinging at the chest to not only open its contents, but take out the Beagle Boy. The path from here is pretty straightforward: pogo onto merducks and Beagle Boys to cross the water, drop down the pit, drop down another pit (though you should pogo as you fall to avoid colliding with a slug), and drop down yet another pit beneath a plant.

In the penultimate area before the boss, you can open a couple of chests, as well as swing a block at the plant and a rock at the bat to avoid having to dodge them. Drop down and proceed left until you trigger a scene to face the boss. 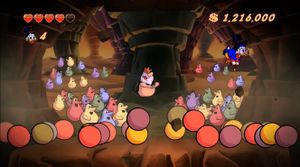 This is perhaps the most difficult attack to dodge; watch for unpredictable movements to pogo over any of the Terra Firmians that hop out of formation.

After a long scene, Scrooge will have to battle the king of the strange creatures that inhabit these mines. He will first try to roll into Scrooge to deal damage to him; dodge the roll with a simple jump and then pogo onto the king to deal damage right back. The king will then perform an even longer roll, as he rolls across the ceiling and then back around to try to trip Scrooge up. Jump over him until he tires out, after which he'll jump to the background and perform one of two attacks:

Once one of these attacks have concluded, the king will roll back into the foreground and continue his offense immediately. You can hit him again after his first roll, after which he'll roll across the ceiling again. Dodge this attack and he'll return to the background to repeat one of the previous two attacks. Repeat this pattern until you have hit him five times, after which he will finally relent, allowing Scrooge to at last collect his treasure.