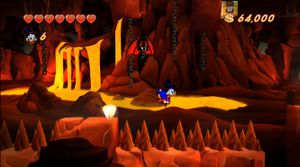 Pogo low by releasing the pogo before Scrooge can jump too high to avoid these bats.

To unlock this stage, you have to clear all others. Scrooge is now on Mt. Vesuvius, on a mission to rescue his nephews. The first enemy you'll encounter here is the skeleton. If you pogo onto it in the right position, you can swing its head at the chest above to break it open. However, if this proves too difficult, then just pogo the skeleton and move on, as there is only a diamond inside. The next enemy that you'll encounter is the big bat; stand right below it until it drops, and step away before it can fall on you for an opportunity to pogo it. The next bat will be a little trickier to avoid, as it sleeps above spikes that Scrooge must pogo over. Try to pogo low by releasing the pogo prematurely, then starting to pogo again before you can drop onto the spikes. Eventually, you'll come upon Glomgold. Swing at the blocks that he's standing by to continue forward. 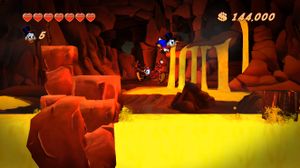 Jump over this merduck and pogo only when it jumps up, as its late jump can lead to a lethal fall for Scrooge otherwise.

On the next screen is a pool of lava that red merducks will jump out of. Pogo atop them to cross the pool, but take note that after the first couple of pairs, the next merduck will pop out of the pool late. Jump over the bubbles and don't pogo until it jumps out, as an early pogo is an easy way to take damage as you jump to the next one. As you pogo over the final group of five, you should automatically obtain an achievement/trophy. After this sequence, you can continue to the next screen, where you can only see Scrooge's silhouette against a wall of red. Use the same strategy to defeat the bat, then take the lower path, which a skeleton stands in front of. If you jump up in a corner to the right of the rock, you'll reveal a chest that you can open by swinging the rock. Inside is an invincibility coin on Easy/Medium. Climb the chain at the end of the path here to escape this area. 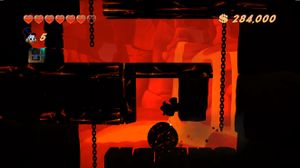 Pogo in the space here to jump over this rolling boulder.

On the next screen, you should see Glomgold holding up a rocky platform. Pogo onto it to reach the chain above him, which you can climb to reach a spiky area. Pogo over the spikes to the right, stopping short of the spikes on the wall, and onto the platform to reach the next chain above, where the screen will once again go dark. Jump to either alcove by the chain to avoid a falling boulder, then continue the ascent. This time, you'll have to pogo over the boulder as it comes to the spot with a raised ceiling. Behind the blocks here is a chest containing a cake on Easy/Medium, so it may be worth swinging for depending on your health situation. Hide from the boulder one last time, in a nook to the right, and climb the chain to finally conclude this sequence. 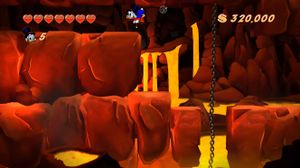 Find this passage for an extra life on Hard/Extreme and health items on Easy/Normal.

In this next area, you'll have to pogo over the spikes and the boulders, using the latter to jump high enough to first jump over a wall, and then reach a chain. After climbing the chain, pogo into the wall to the left to find a hidden passage. In this hidden area are restorative items on Easy/Medium and an ever-valuable extra life on Hard/Extreme. After these goodies are collected, continue right via the mine cart. As in Transylvania, Scrooge must jump off at the end of the ride to avoid a lethal fall. Afterward, you can pogo over a couple of more merducks hiding in a pool, and even a merduck that jumps up in the center of a chasm to halt your fall. This merduck allows you to reach the next mine cart sequence; if you're still in need of health, open the chest on top for an ice cream and then drop down below for another ice cream before entering the cart. Again, as the mine cart falls, jump out onto the platform.

Swing the blocks out of your way and climb up the chain. Outrun the crumbling ceiling and dodge the ghosts here to reach a crumbling floor, followed by falling chains (you'll have to jump off one and onto the next quickly to avoid falling). Climb up the chain hanging from a gap in the ceiling to find some chests, then drop off the other side to see Glomgold one last time. Proceed to the next screen to face the final boss. 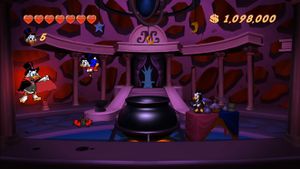 Pogo onto these bats to pogo onto Dracula, as Scrooge cannot reach him otherwise. 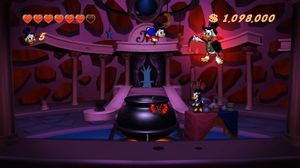 When Dracula sends two bats, you must pogo onto both to reach him.

Count Dracula Duck has a number of attacks. Between these attacks, he will summon bats to fly across the screen. You must pogo onto these bats to reach him, as you cannot jump high enough to pogo him otherwise. This is the only way to deal damage to him. If you pogo onto the bat too late and can't catch him, then don't bother attempting to jump toward Dracula, as this will only deal damage to Scrooge. Dracula will continue to disappear and reappear, summoning bats all the while until you've successfully hit him, so your tries here are essentially unlimited. After you've hit him, he will perform one of his attacks. You can predict which attack he'll use based on the color of the smoke preceding it. These are as follows:

Luck o' the Ducks
Get back what Magica stole

Magica and Glomgold are now fighting over Scrooge's dime, and race up to reach them. You must beat them to it or lose a life. You'll have to be very quick on all difficulties to beat them here, so make sure to follow these instructions closely (you can pause if you need a moment to consider your strategy on each screen):

Scrooge will now have his treasure, but to survive this journey, he'll need to go through one last trial...

Tougher than the Toughies
Beat game on Hard difficulty

Smarter than the Smarties
Beat game on Extreme difficulty

This is the final sequence of the game. Take note that on Easy/Medium, the achievement/trophy for the dime is the last one you need to obtain. However, on Hard/Extreme, you'll need to clear this portion to earn the final achievement/trophy. Again, follow these instructions closely:

Congratulations on beating a tricky game! Enjoy the well-earned ending scenes. After the credits, you can either travel to a different stage from this save file and build up your wealth, or start a new game (all your purchases from the Gallery will carry over). The Extreme difficulty will be unlocked after beating the game on Hard, so make sure to try it if you're looking for a challenge.

[Go to top]← The Moon | Finale | Achievements and trophies →