Like the original game, DuckTales: Remastered is a side-scrolling platformer in which the player, as Scrooge McDuck, must collect valuables and defeat enemies on his quest for treasure. The valuables scattered throughout each level make up a money value, shown at the top-right corner of the screen, which can be spent on unlockables in the Gallery following the defeat of the level's boss and return to the game's hub, McDuck Manor. This is made challenging due to Scrooge's limited health, represented in the top-left corner of the screen by three hearts at the start of the game, and lives (as Scrooge begins with two on every difficulty other than Easy, where his lives are unlimited).

A hit from an enemy or general hazard in Scrooge's environment causes Scrooge to lose a heart (or half a heart on Easy), and falling down a pit or being crushed causes Scrooge to lose all of his hearts. If he has another life, he will be sent back to the last checkpoint. If he loses all of his lives, he'll be sent back to McDuck Manor (or in the case of Extreme, trigger a Game Over and be forced to start over from the beginning). However, the loss of hearts or lives is not the be-all, end-all of a run, as recovery items (represented by ice cream, which restores one heart, and cake, which restores two) and extra lives (represented by Scrooge dolls) can be found scattered throughout the worlds, as long as one knows where to look. Heart Containers are also hidden throughout each level on Easy and Medium (they can only be found in Transylvania and the Himalayas on Hard and Extreme). Once found, they remain for the rest of Scrooge's run through the game, allowing him to take a greater amount of hits before death.

For information on difficulty levels and general game progression, see the walkthrough page. Below is the game's cast, whose designs, personalities, and even voices have been borrowed from the 1980's cartoon.

Scrooge is the only playable character and thus the hero of the game, though his goals aren't always noble. Scrooge is most commonly motivated by greed, just like his Christmas Carol namesake Ebenezer Scrooge, but he also cares greatly for his nephews and his staff. At the start of the series, Donald Duck joins the Navy and leaves his nephews, Huey, Dewey, and Louie, in the care of their great uncle Scrooge. Initially, Scrooge clashes with the boys due to their very different lifestyles, but they come to bond over their shared love of adventure. Scrooge is especially well-versed in hunting for long lost artifacts, able to traverse dangerous ruins with relative ease, all in his quest to add to his already incredible wealth. With this in mind, it is only natural that Scrooge play the role of protagonist, though he requires help from his many allies along the way.

Scrooge's only weapon is a pogo stick, and while it doesn't seem like much, it can kill most common enemies in one hit. It also allows him to reach locations that are otherwise unreachable, either by bouncing upward or across spikes that would hurt Scrooge if he were to simply walk. Mastering the use of the pogo stick is essential for success in DuckTales, especially on harder difficulties, so make sure to use Scrooge's only tool wisely.

Huey, Dewey, and Louie are the nephews of Donald Duck and the great nephews of Scrooge McDuck. Despite their roles as protagonists in the cartoon, the nephews are never playable in DuckTales: Remastered, and rarely provide support for Scrooge. Instead, they will occasionally act as damsels, requiring Scrooge to search for and rescue them from the clutches of the game's villains.

Webbigail "Webby" Vanderquack is a friend of the nephews. As she is the granddaughter of Mrs. Beakley, Scrooge's housekeeper, Webby becomes acquainted with Huey, Dewey, and Louie shortly after their arrival at McDuck Manor. Though Webby isn't as bold as the boys, she will occasionally tag along on Scrooge's adventures, more often than not to prove to the boys that she can be just as brave as them. 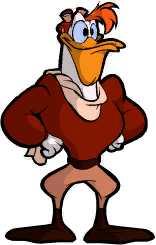 Launchpad is Scrooge's reckless personal pilot with a penchant for crash landings. This is reflected in his motto: "if it has wings, I can crash it." Launchpad is not only reckless, but quite dimwitted. Scrooge tends to point this out with his dry humor, which will more often than not go over Launchpad's head. However, despite his recklessness and simple-mindedness, Launchpad is a competent pilot who is more than willing to fly Scrooge into danger, leading Scrooge to trust him greatly.

His role in the original game as a checkpoint does not carry over here, as checkpoints are automatic and leaving the level before it has been completed is impossible. Instead, his role has been relegated to flying Scrooge to new levels, and occasionally flying him to different areas within the level. In the Amazon, Scrooge hangs from Launchpad's plane after collecting the ancient coins scattered around the first area, and in the Himalayas, Scrooge must protect the plane from bombs and Beagle Boys after finding the part that Launchpad needs to fly it.

Gyro is Duckburg's most famous inventor and a good friend to Scrooge. Though his incredible intelligence lends itself to some impressive technology, Gyro can also be absentminded, creating overly-ambitious inventions that can sometimes go haywire. Still, his considerable success rate makes him a valuable ally to Scrooge, as can be seen throughout the game.

Gyro can be seen in the African Mines and the Moon, where he provides Scrooge transportation in place of Launchpad, as well as an invention that allows Scrooge to breathe in outer space. Gyro also makes an appearance in the game's bonus level. To access the bonus level, attempt to enter a level with a 7 in the 10,000's place (for example, 470,000, or 675,000). Scrooge will then encounter Gyro in the clouds, flying in a helicopter above him and dropping gems for Scrooge to add to his fortune. Fall from the clouds or reach the end of the bonus level to conclude it. 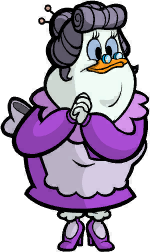 Mrs. Beakley is Scrooge's housekeeper, joining his staff after he takes in the nephews as someone to assist him in looking after them. She brings her granddaughter, Webby Vanderquack, with her, and together they move into McDuck Manor. There, they become acquainted with and come to trust Scrooge and the nephews, despite their adventurous and danger-prone ways.

Bubba is a young duck from a prehistoric time period, transported to the present by Gyro's time machine. As he has trouble adapting, Scrooge looks after Bubba, and in return, Bubba makes a valuable ally for Scrooge. In the game, he appears only in the Himalayas, frozen underground in a block of ice. Scrooge must pogo on the ice to shatter it, freeing Bubba from his frozen prison and allowing Bubba to assist Scrooge through the rest of the cave. He does this by using his considerable strength to shatter any blocks of ice in Scrooge's path, even clubbing enemies that pose a threat to Scrooge. 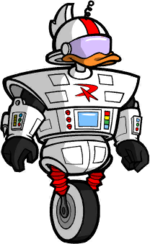 Fenton is Scrooge's bumbling personal accountant, displaying great skill at his job but not much else. Fenton's lack of confidence further exacerbates his incompetence, as he will often desperately attempt to make up for his mistakes only to make the situation worse. This changes when he dons the armor of Gizmoduck, as he becomes a heroic bodyguard for Scrooge who is able to dispatch enemies with relative ease. The Gizmoduck armor is an invention of Gyro's, and it provides Fenton with impressive mobility and weaponry. The armor is activated when Fenton utters his catchphrase, "blabberin' blatherskite;" Gyro programmed it so because he believed nobody would use the word "blatherskite."

Fenton's only appearance in the game is on the Moon, in which he must be rescued from captivity in a spaceship. Scrooge must then collect the pieces of Fenton's Gizmoduck suit that have been scattered around the ship, ultimately allowing Fenton to transform into Gizmoduck once the suit has been returned to him. Gizmoduck fires rockets at all enemies in Scrooge's path, allowing him to proceed across the surface of the Moon with ease.