Get adjusted to the controls as you proceed forward to the stage's first scene. Here, the first of the Beagle Boys is introduced, holding Huey hostage. Pogo onto the blocks to gain access to the button, which causes a giant hammer to swing at Baggy Beagle. After another scene, proceed forward under a high wall (if Scrooge jumps up while directly to the right of that wall, a hidden diamond will appear). Pogo onto the generic Beagle Boy to get him out of the way and climb up the rope. 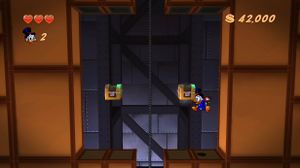 Hidden chests can be revealed by jumping here.

Pogo onto the chests on either side of the rope to open them, then continue climbing upward. While the next area may seem empty, if you jump around on either side of the rope, hidden chests will appear. Pogo onto them, jumping toward the wall after opening them to reveal hidden red diamonds. After climbing the rope, jump on the small platform to the right to reveal hidden diamonds. Above this platform is a floating platform where two chests sit. This platform is too high for Scrooge to reach unless he jumps around to the left, revealing a chest that he can pogo on to reach them. Continue left, where you can pogo onto the Beagle Boy and one of the bricks to reveal another large diamond.

A cane swing on the oil drum will allow Scrooge to pogo over the high wall ahead of him. Wait for the Beagle Boy below to come close enough for Scrooge to pogo on him, as Scrooge will not be able to pass him safely with the low ceiling in the way. A scene then introduces you to another of the named Beagle Boys: Burger Beagle, who is now holding Dewey hostage. Jump onto the lower button first, as this will low Burger Beagle toward a burger. Then, pogo onto the higher button, which will summon a hammer to swing at Burger and subsequently free Dewey. 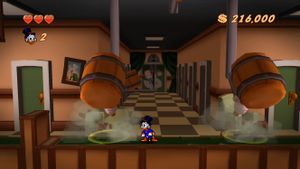 Wait for the hammers to drop before passing under them.

Cane swing at the rock as instructed to drop the oil drum above, allowing Scrooge to use it to reach the high wall. Jumping on the high wall will reveal a hidden diamond, so make sure to collect it before dropping off the other side, as you will no longer be able to reach it after doing so. Afterward, Scrooge will have to dodge his own traps, in the form of giant hammers. Wait for them to drop before passing, and take advantage of the spaces between them to wait for the perfect opportunity. Pogo onto the Beagle Boy ahead and climb the rope. 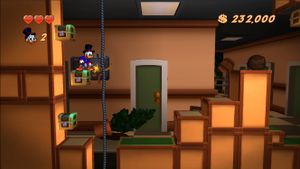 The hidden chest at the very top here holds an extra life on Extreme.

Drop onto a platform to the left while ascending the rope to reveal a hidden large diamond (a small one is off to the right). Continue climbing the rope until you reach the next area. Here, climb the rope all the way to the top and drop off to the left. This should reveal three chests; before you pogo onto any of them, make sure the third chest at the very top is revealed, as this holds an extra life on the Extreme difficulty (and a cake on others). Climb the steps to the right and use the cane swing on the rock to break open the chest. Right on the other side of the high wall is an ice cream on non-Extreme difficulties.

Jump over the gap to come across an oil drum. Don't use the cane swing on it just yet; instead, pogo onto it to reach the chests above. This gives Scrooge access to the invincibility coin on non-Extreme difficulties. Quickly cane swing the chest to proceed forward and take out the Beagle Boy ahead. Swing at the rock situated between two chests on the right side, so that it hits the chest on the left. You can simply pogo onto the other chest. Dodging the next set of hammers is a bit trickier than the first set, but you can use the same strategy, proceeding under a hammer after it has dropped (and before the one above Scrooge drops). You must use a similar strategy to rescue Louie from Bouncer Beagle, waiting for the laser to fade before jumping on the lower button, then the higher button.

Proceed forward toward the boss. Before exiting the screen, pogo against the high wall above Scrooge to find a hidden cake on difficulties lower than Extreme. 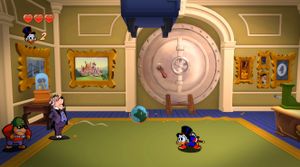 The easiest way to dodge the obstacles thrown by Big Time Beagle is to simply duck under them.

Sink or Swim
Dive into the Money Bin

Shortly after the battle begins, Duckworth enters the screen with a remote. The button he presses causes a safe to be lowered at the top of the screen. Big Time Beagle will then throw a globe or a statue either high or low. There are two potential strategies in dodging the obstacles that he throws:

Whether you duck or jump, dodging the obstacle is imperative, as this is the only way in which Big Time can hurt Scrooge. Once the obstacle has stopped moving, Scrooge can safely cane swing at it without taking damage, and it will fly toward the safe, dropping it on Big Time Beagle's head. This will stun Big Time, allowing Scrooge to pogo onto him, and he will at last take damage. Repeat this pattern five times to finally knock out Big Time Beagle and reclaim Scrooge's Money Bin, allowing him to travel to a number of unique locations. As is mentioned on the walkthrough page, it is your decision which level you begin with, though the first listed is the Amazon. You can also enter the vault at the back of the center of the room and dive off the platform for an easy achievement/trophy.