For the first part of this stage, Scrooge must collect ancient relics from chests scattered around the area. Collecting all five of them will allow him access to the Incan temple. As you proceed forward, collect the diamonds while dodging the gorillas. Swinging the rock at the chest will earn Scrooge another diamond, and, if a gorilla is walking underneath, take them out. Pogo onto a high platform to find the first large chest of the stage, where the nightingale coin can be found. On non-Extreme difficulties, an ice cream is hidden in one of the chests beside it. Pogo onto the next high platform to avoid the carnivorous plant, and pogo onto the snake when it's coiled to move past it.

Look Ma, No Spats!
Enter either underground section of Amazon and climb up the other side using only the pogo jump

Open the chest to the right of the tree stump to find an invincibility coin on non-Extreme difficulties. Backtrack to the gap in the ground and drop down to find yourself in the underground area, where Scrooge must pogo across vines in order to avoid taking damage, as well as dodge spiders that drop from the ceiling. You should use the coin while it's active to traverse past the thorny vines and spiders, where the eagle coin can be found. On Extreme, an ice cream is inside the same chest, so save it until Scrooge takes some damage. Traversing past the thorns and spiders here while taking absolutely no damage is very difficult, but necessary for an achievement/trophy (which should be attempted on Beginner, as this difficulty allows unlimited lives). For now, familiarize yourself with the half-jump by releasing Scrooge's pogo before he can reach the spiders or thorny vines above him. 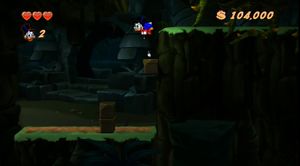 Pogo into the wall above this area to find a secret tunnel.

Return to the rope that leads to the above-ground area and swing at the oil drum to reach the high wall on the far left. Past this wall is the Queen's horse coin and a stack of chests containing diamonds and ice cream (the latter only on non-Extreme difficulties). Pogo back up and into the high wall to the left to find a secret area where more diamonds can be found before returning to the rope and climbing it.

Back above-ground, jump over the two plants by starting your pogo while as close to the first plant as possible without taking damage, or pogo onto a bee that flies between them. Ahead are some vines that Scrooge can climb. The vine in the center leads to the sun coin. Between some more vines ahead is the scythe coin. A vine to the right can be climbed for some more diamonds (and an ice cream on non-Extreme difficulties), but otherwise, Scrooge can proceed to the far right of the area to find the spear coin. Drop down the gap here to end up back in the underground area, where you can find the shield coin to the right. Finally, climb back up above-ground and then climb up further until you reach the end of the rope (you can drop off onto a platform midway for a red diamond). To the left is the final coin, the Scales of Justice coin. Proceeding to the right with all coins in hand will allow Scrooge to proceed to the temple via Launchpad's plane. 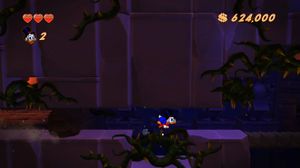 Pogo over these thorns to avoid falling victim to the boulder.

Pogo on the rock to the right upon landing for a red diamond. Then, climb the rope to enter the temple. The temple entrance acts as a checkpoint on all difficulties, but take note that this is the only checkpoint until the boss on Extreme, so death before the boss will result in having to start from the beginning. Pogo up onto the ledge to reach the chest, then pogo on the higher ledge to find a hidden area containing more chests (and a cake on lower difficulties). Return to the start and proceed to the right to begin something of a chase sequence; a giant boulder will drop from the ceiling as Scrooge passes, but he can outrun it as long as he keeps a steady pace. Make sure to pogo over the thorny vines in the ground, and halt your pogo when you reach the crumbling walkway, as the thorny vines are now on the ceiling. Take note that failure to outrun the boulder will kill Scrooge, regardless of how much health he has left. 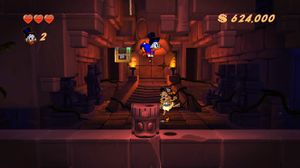 Pogo up to the rope here to find Mrs. Beakley.

After this segment comes Scrooge's first encounter with one of the trickiest enemies in the game: the native. Dodge the native's spear as best as you can before bopping him with a pogo jump. More importantly, you should see a rope above you; use the statue head on the floor to reach it (you should also find a chest in the way, containing a diamond) and climb up. There are plenty more diamonds in this hidden area, and even better is what you can find after dropping off the other side: Mrs. Beakley, who will offer Scrooge health boosts and an extra life. 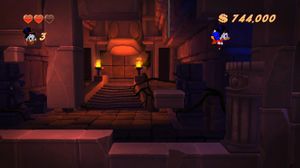 Pogo onto the statue here for treasure and an achievement/trophy.

Once Mrs. Beakley's treats have been collected, drop down to find more natives and spiders to fight off. Pogo onto the floating block here to find an invincibility coin on lower difficulties, making this section of the stage a bit more manageable. On Hard and Extreme, wait for the natives to come to you before jumping on the spiders, as avoiding both at once is impossible. At the end of the path here is a tall statue in the shape of a pillar. Pogo onto it repeatedly to collect a wealth of diamonds and earn an easy achievement/trophy.

Climb up to the next area, opening up the chests to the right for a valuable extra life on Extreme (this is a cake on lower difficulties). Swing the rock at the chest above to collect a diamond, then proceed past the crumbling ceiling, keeping a steady pace to avoid taking damage. A chest in the center of this area has ice cream on lower difficulties, as well as a hidden cake that can be revealed with a pogo at the end of the area. Climb up another set of ropes, avoiding the plant and hitting the snakes out of the way, to come to another tricky area.

Take your time dealing with the natives before jumping on the spiders, utilizing half-jumps if necessary. You can swing a rock toward the end of this section to hit a snake, allowing Scrooge passage to a couple of chests. Jump on the first before hitting it with a pogo to reach the second, which holds a cake on lower difficulties. You can pogo atop some thorns at the end of this area, but before taking the rope up, pogo into the wall. Here, you can find a heart container on Easy and Medium, and a treasure worth $1,000,000 on Hard and Extreme.

Climb up to reach the final area before the boss. There are no hazards here, and an ice cream on all difficulties, located in a chest at the very top of the area. When you're ready, proceed left to face the boss that stands between Scrooge and his treasure. 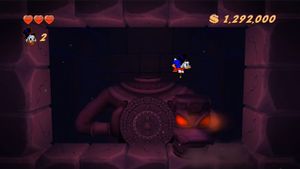 Pogo onto the statue while it's low to do some damage.

Extravagant Housewares
Collect the Sceptre of the Incan King

Like most boss fights in the game, the fight against the Incan Sentinel has two possible phases: one in which Scrooge can only dodge the Sentinel's attacks, and one in which he can provide some offense of his own. The battle begins with the latter phase, as the giant statue rises and falls across the small space that Scrooge is trapped in. Simply dodge it as it falls and pogo onto it before it rises again. Jump on it three times to begin the defensive phase.

Segments of the walls, floors, or ceilings will begin to rumble. Watch which ones shake to find a safe space, in which Scrooge can avoid a crushing fate. The walls will always start from the bottom, allowing Scrooge to jump up onto them like steps, but the floor and ceiling are a bit trickier. Try to stay in the center of the screen in case you must move to the far right or far left. After this phase, the statue will come back toward Scrooge with a vengeance; when it does a spin in the air, it will come crashing down to the floor so hard that it will create a shockwave, hurting Scrooge if he doesn't jump in time. Hit it three more times to enter another defensive phase, then again three times. In the defensive phase that follows, the walls, floor, and ceiling will move to crush Scrooge much quicker, so keep a close eye on them for sudden movements.

After one last set of three hits, the Incan Sentinel will be destroyed, allowing Scrooge to collect the Sceptre of the Incan King. If you have trouble clearing this stage on the first try, don't fret; the Amazon can be considered one of the trickiest stages despite its placement in the level select, so feel free try out other stages and collect more Heart Containers before tackling this one.