The stage begins with a crash-landing. In order to get Launchpad's plane back up and running, Scrooge must find the fuel regulator that he dropped. The first enemy encountered here is the snow bunny, which will burrow into the snow before jumping up, then burrowing again. They can be defeated if Scrooge pogos onto them while they're jumping or while they're traveling through the snow (though they're harder to catch in this case). Take note that Scrooge cannot pogo on the ground here, as this will only cause him to sink into the snow and be stunned for a few seconds. Above the next bunny will be a chest containing a diamond, and shortly past this, Scrooge will encounter the mountain goat. The goats jump so high that Scrooge will not be able to pogo onto them if he himself is not on higher ground, so if you have no other option, dodge them by walking under them as they jump.

Proceed to the very right of this area, past the first gap. Drop down the second gap to find two chests containing diamonds, as well as a hidden cake to the left on Easy/Medium. Drop down further and continue left, past the bunnies, to find the fuel regulator. But of course, it can't be so simple, as three snow bunnies tear it apart and each take a piece in a scene. Scrooge must now find and defeat the three bunnies that have stolen the pieces of the fuel regulator in order to continue. You can look to the left for some hidden diamonds, but drop down the gap here to begin the search.

Piecing together the fuel regulator[edit] 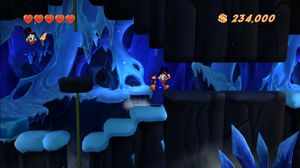 The Heart Container can be found on all difficulties past this hidden passage.

Walk into the wall to the right to reveal a hidden passage, where the stage's Heart Container can be found on all difficulties. Return to the point that you dropped in from and drop down further. Here, Scrooge will have to pogo along some floating platforms to the left before encountering a spider. As in the Amazon, wait for it to drop by approaching it before you pogo to defeat it. Past the spider is a bunny and some ice cubes that you can use to pogo over some walls. After you pogo over the first wall, swing at the ice cubes to the left to clear the path before you pogo onto the one to the right; this one has an invincibility coin hidden inside on Easy/Medium. You can use it to bypass the spider and bunny ahead, though you'll want to halt at a stack of ice cubes, as underneath is a cake on Easy/Medium and an extra life on Hard/Extreme. 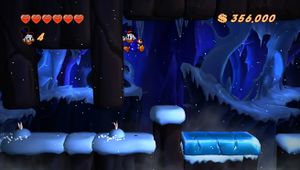 This bunny holds the first piece of the fuel regulator.

Past the stack of ice cubes is the first of the bunny thieves, who holds the first piece of the fuel regulator. Defeat it to obtain it. Past another bunny to the left are some more floating platforms, this time with giant icicles in between. Approaching them will cause them to fall, so wait for them to fall before passing. Shortly after crossing the chasm, you should find Bubba the Caveduck, frozen in place. Pogo onto the giant ice cube to free him from his icy prison, and he'll repay you by smashing any giant ice cubes in your path. Take the lower path to continue left, having Bubba smash the ice cubes out of your path until Scrooge sends him away to wait by the plane with Launchpad. 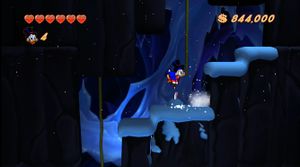 Defeat this bunny to claim the second piece of the fuel regulator.

Continue left to the next screen and pogo onto the bunny in your path. Climb up the rope to encounter another bunny; this one holds the second piece of the fuel regulator. Climb up another rope and drop down the pit on the other side. Proceed to the right now, along the floating platforms and past the spider, to make it onto an icy platform. Past a couple more spiders will be your first encounter with the hockey duck, who will attempt to trip Scrooge up by swinging ice cubes at him. You can defeat him by doing the same, or with a simple pogo. Continue right, ignoring the pit, until you come across two more hockey ducks. Defeat them and the spider nearby to gain access to the final thief. 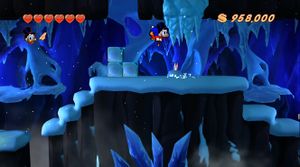 Defeat this bunny for the final piece of the fuel regulator.

The third piece of the fuel regulator can be obtained by defeating the bunny by the pile of ice cubes. After you've obtained it, pogo onto the pile of ice cubes to reach a hidden passage in the wall to the left. Once you reach a dead end here, climb up a rope that cannot be seen to finally obtain visibility and escape the cave. Pogo onto the ice cube to the left for a cake on Easy/Medium and an extra life on Hard/Extreme, then continue to the right, where you can find Mrs. Beakley on Easy/Medium. Use a hidden chest to reach the two high chests to the right, then go back to the left and fall back down the pit that you came from. Backtrack to the left of the cave, and climb up the rope past the floating platforms. Use the ropes and spiders to cross the large gap, and keep climbing up until you see a Beagle Boy.

Pogo onto the Beagle Boy to find a hidden passage in the wall to the left. Swing at a hidden oil drum in order to gain access to the treasures beyond. Return to the Beagle Boy, who should have respawned by now, and pogo onto him to reach the platform above the rope, where you can find some hidden diamonds. Continue right until you enter a new screen, where Launchpad and Bubba can be found with the plane. If you have all pieces of the fuel regulator, this will trigger a scene that will lead into a boss fight. 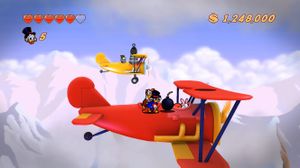 Swing at the bombs before they blow up to deal damage to Glomgold's plane.

This boss fight takes place on Launchpad's plane, with Glomgold firing at it from his own plane. If Launchpad's plane takes too much damage, or if Scrooge loses all of his hearts, you'll have to start the fight over from the beginning. Glomgold will alternate between firing Beagle Boys and bombs at the plane. If either lands on Scrooge, he will take damage. You can determine where the Beagle Boys and bombs will land by watching the plane for shadows (Beagle Boys are represented by larger shadows while the bombs will be smaller).

Pogo the Beagle Boys as soon as they land to get rid of them; they act as nothing but a distraction here. As for the bombs, they will blow up and deal damage to Launchpad's plane if left alone for too long. Swing at them as soon as possible (from either direction) and they will be launched right back at Glomgold, dealing damage to his own plane. This is the only way to get back at him, so be patient as you take out Beagle Boys and wait for bombs to swing at. After the third bomb, Glomgold's plane will start smoking, after the fifth, it will fall out of the sky. Scrooge has attained victory for now, but there's still a treasure to collect. Continue right, making sure to pogo on some narrow platforms to avoid falling down a pit, until you reach the stage's true boss. 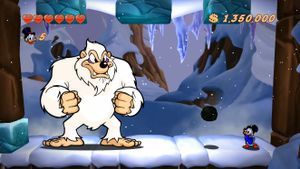 Swing at this rock to drop a giant ice cube on the monster's head.

This yeti-like monster will begin by jumping across the screen toward Scrooge. Find a window to walk under one of its jumps to avoid getting trapped between it and the wall, which would result in inevitable damage. Once the monster reaches the wall, it will begin pounding it, resulting in a quake that causes ice cubes to crumble from the ceiling. Dodge them as best as you can until the torrent ends, after which you can swing a remaining rock at one of the giant ice cubes above. If timed right, it will come crashing down on the Snow Monster, allowing Scrooge to pogo onto its head and deal a hit.

After the first round, the Snow Monster will introduce a new jumping attack, in which it charges the jump before crashing down to the ground, creating a shockwave that will deal damage to Scrooge if he doesn't jump to avoid it. Afterward, the battle remains much the same, with the exception of the Snow Monster smashing two of the giant ice cubes up above with one of its shockwave attacks, leaving only one for Scrooge to swing at. This will cause you to be more precise with your timing, as the Snow Monster will have to be right below the ice cube after you swing at it in order for it to land on the monster's head. It may take some practice, but as long as you can dodge long enough, the battle shouldn't be too difficult.

After the battle, Webby will help clear up a misunderstanding and Scrooge will be able to collect his treasure, the Lost Crown of Gengis Khan.