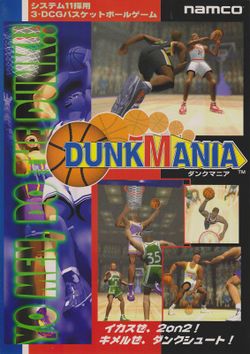 Dunk Mania (ダンクマニア, literally Danku Mania) is a two-on-two basketball arcade game, which was released by Namco in 1995 only in Japan; it runs on the company's System 11 hardware, and uses a mid-court sideline perspective. The players must use an 8-way joystick and three buttons (the first for shifting, the second for shooting and blocking, and the last for passing and stealing) to take control of two of ten (American, as opposed to Japanese) basketball teams playing in the fictional "East District Conference" and "West District Conference" - and as the game's name implies, its focus is on dunks. After each dunk, two replays of it will get shown from different camera angles, and after each basket, the other team will get the ball at half-court; also, as the game is not licensed by the NBA, the names of its teams do not match those of the real-life American basketball teams which hail from their cities. Unlike in Midway's NBA Jam series, there is no pushing of opponents or fouls, and there are also no quarters or halftimes - and if a player-controlled team should beat a CPU-controlled one when either side of the cabinet is inactive, they'll get to play against the next one (it's also possible to beat all the CPU-controlled teams in either one or two coins as a result of this fact as the player-controlled team get to carry on playing each time they win). If the player-controlled team manages to beat all nine of the CPU-controlled teams, their higher-scoring player gains two dunks in a slam-dunk contest; after that the game will be over regardless of how well the player who took part in the contest performed.