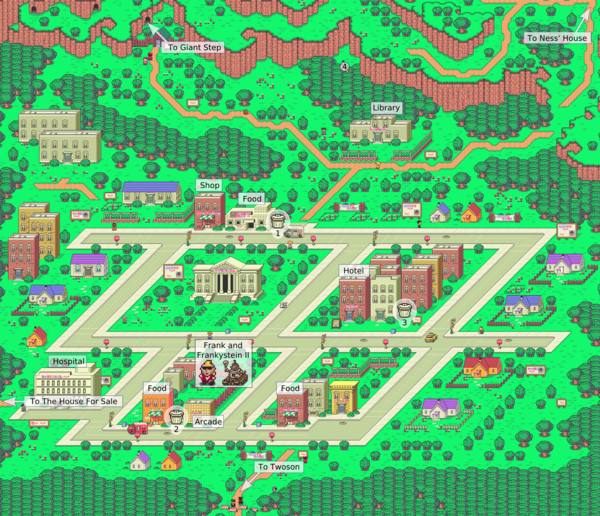 The area you cover in Onett. Presents and other items are in a circle with numbers referring to the items found section below.

Before heading for Onett, try increasing your level by walking around the hill and battling animals. Coil Snakes, Runaway Dogs, and Spiteful Crows will provide a lot of experience points and butt kicking needed early in the game. Runaway Dogs give the most experience points. Remember that you can restore your HP and PP at your house by talking to Mom. Being at level 3 or 4 would be recommended before going to Onett. Also, before you head out, visit Lier X. Aggerate. He'll lead you to a giant statue. Ignore it for now; it will be important later.

Begin heading down south, down the path toward central Onett. Just before you enter the town, you will see the library. Go inside and talk to the woman at the desk. She'll give you the town map.

TOWN MAP A handy town map. It can be used in Onett, as well as other towns. You can view the map quickly, simply by pressing

Go to the left and north of the library and you'll see a house sticking out of the trees. If you stand directly below it and walk up, you'll be able to enter this house where a kid will give you a Mr. Baseball Cap!

Head south to the drugstore (check your new map to find where it is). Withdraw $130 from the ATM and buy a Tee Ball Bat (selling your Cracked bat as well) and Cheap Bracelet and equip them both.

You may notice a house for sale on the west side of town. For a real challenge, try and buy that house before leaving Onett. Note that there is really no reward for doing so, other than bragging rights.

Snoop around the trashcans in Onett and you may find some items of use to you. One trashcan can be found north of Onett next to the burger shop, another south next to the drug store, and one next to the hotels found north-east of Onett.

Go to the Burger Shop and buy a few hamburgers. Now head south toward the arcade where you'll find a lot of Sharks (the local gang). At Level 4, fight them one at a time. At Level 5, fight various sharks at once. Try to fight Pogo Punks more as they drop hamburgers. Once you are level 7 go into the arcade. Make sure you have at least five hamburgers with you for the upcoming boss battle.

Once inside, fight the Sharks on the first floor and one on the second. Fight the Yes Man Jr. blocking the back door to get to Frank. Make sure you have Hamburgers with you.

Boss Battle: Frank
Offense: 12, Defense: 17 Speed: 7, Guts: 5
HP: 63, PP: 0
If you're at level 8, Frank will be a piece of cake. Use PSI Special α and he'll fall. If you don't have PSI Special α yet, you'll need to just keep bashing Frank until he's down. Remember to keep your own HP above 45 (if you have PSI Special α, then don't waste PP on healing, eat Hamburgers instead). Once Frank falls, you'll have to fight Frankystein Mark II.
Exp: 50, Money: $48, Item: Nothing

Boss Battle: Frankystein Mark II
Offense: 15, Defense: 18 Speed: 4, Guts: 0
HP: 91, PP: 0
This machine is capable of some pretty strong attacks, but has a noticable pattern to them. Every other turn it must release steam in order to attack again. When he does, defend, and you will only take 7 or so damage the next turn instead of the usual 60 or so. If you have PSI Special α, use it. If you do not, keep bashing and healing as needed. Keep your HP above 45 and he'll eventually go down.
Exp: 76, Money: $31, Item: Nothing

After you defeat Frank and his machine, he will restore your HP and PP for free behind the arcade. The punks will no longer be a threat, and will no longer patrol Onett streets.

The cabin leading to Giant Step was locked because of Frank. Now that Frank has been defeated, the Mayor will be willing to give you the key to the cabin. Head to City Hall (check your town map for directions) and talk to the Mayor on the top floor to receive the Key to the Shack. Make sure to stock up now on Hamburgers.

Head northwest toward Giant Step and when you arrive at the cabin unlock it with your newly acquired key. One of the guys in red will give you a Travel Charm if you talk to them. This Charm will protect you against Paralysis, but does not increase your stats.

The first set of shops