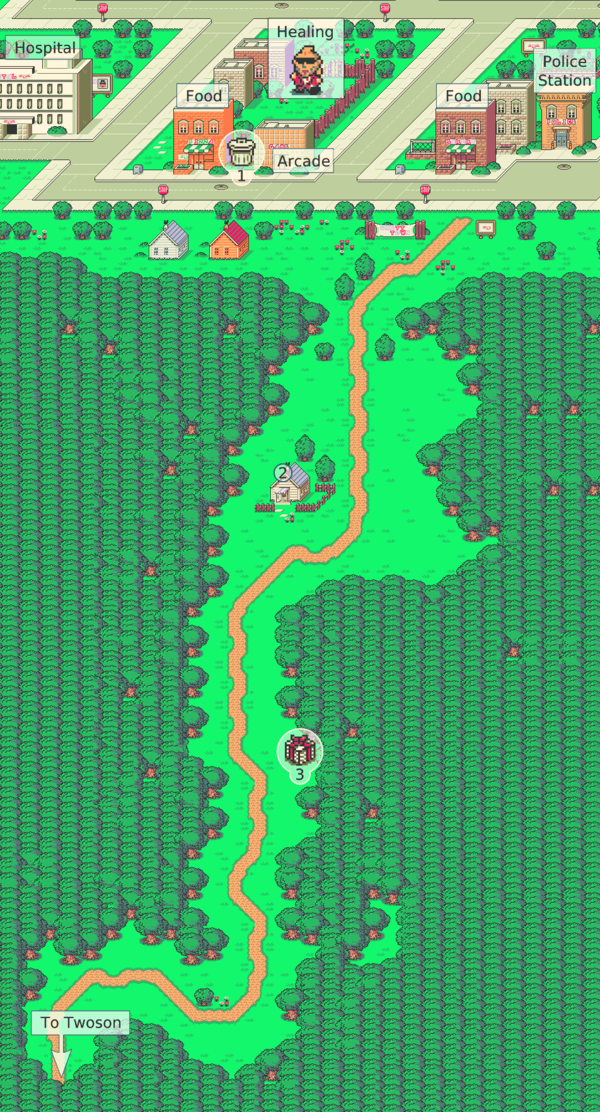 The area you cover in Onett after Giant Step. Presents and other items are in a circle with numbers referring to the items found section below.

When you exit Giant Step and head back to Onett you'll be stopped by an angry police officer. He wants you to go to the police station. Unfortunately, you're going to have to because the road to the next town is barricaded. Before you go to the police station, stop at Frank's and restore your HP and PP and then save at the Hotel. Make sure to stock up on Hamburgers again.

When you enter the police station, talk to Captain Strong and he'll take you into a back room. Here you will be attacked by four cops and the captain himself! Reserve your PP for Captain Strong, whom you will fight last. Just bash the cops until they all go down (the fifth one will run away). Heal with a Hamburger if you need to. Finally the captain will attack you.

Boss Battle: Captain Strong
Offense: 20, Defense: 24 Speed: 15, Guts: 8
HP: 140, PP: 0
Captain Strong can pack a punch, so be ready to heal whenever you need to. His submission hold can do a whopping 50 damage, so keep your HP as high as possible throughout the battle. Use PSI Special on him to deal a good amount of damage and bash him for the rest of the battle. You may be able to defeat him with two PSI Specials. Heal with a Hamburger if you need to.
Exp: 492, Money: $159, Item: Boiled Egg (1/32 chance)

Captain Strong will order the cops to let you through the barricade so that now you can head on to Twoson. Heal up and save before moving on.

Head south and out of Onett, on the path to Twoson. On the way, you'll notice a small house on the side of the path. Enter it and talk to the mice inside. You'll be given an Exit Mouse to take with you (drop or eat a food item if you don't have enough room). Use this mouse to take you to the entrance of a dungeon if you need to get out quickly.

There is an enemy that you may encounter on the path called the Ramblin' Evil Mushroom. This enemy can "mushroomize" you causing your controls to be awkward and for Ness to be confused during battle. In the case that this happens, simply figure out the new controls and head back to Onett. Enter the hospital and talk to the blue-haired man who'll buy the mushroom from you for $50!