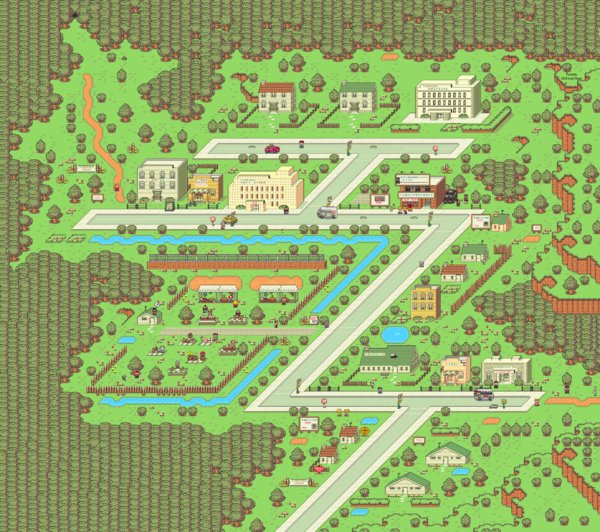 The area you cover in Twoson.

The first thing to do when you arrive is to rent (for free!) a bicycle from the Bike Shop in the northern part of town. This item will allow you to move much quicker and is a nice addition to your inventory. If you don't care to use it, you can always store it with Escargo Express.

Head to the Hotel and talk to the man sitting at the table over and over again. Eventually he'll give you $50. While there, go ahead and rest up. Someone named Paula will be calling you in your dreams! On the way out, call your mom. If you don't call or visit her often you'll get homesick which can affect your performance in battle. Keep this in mind throughout the rest of the game.

Show me the Money
Want some easy cash? Buy a couple fresh eggs at Burglin Park. If you wait around long enough they'll turn into chickens and you can sell them back for $98 more than what you spent on them. Repeat this process until you're tired of it for a head start on having extra money to spend. It might be a good idea to train while waiting for the eggs to hatch.

Find Mach Pizza and get their telephone number. Now you can call them any time to order pizza, which is helpful if you need food while away from a town.

Try to take a bus to Threed. A bunch of ghosts will stop you in the tunnel, forcing the bus to turn back. Guess you can't leave Twoson yet. Meanwhile, it'll be a good idea to gain a few levels by fighting New Age Retro Hippies, Unassuming Local Guys, Cranky Ladies, and Annoying Old Party Men around town. They are fairly easy to beat and give a good amount of experience. Rest at the Hotel if you need to recover.

Talk to the group of guys by the theatre, called the Runaway Five. Apparently they're in a great deal of debt!

Next you'll want to head over to Polestar Preschool and talk to Paula's parents. Turns out she is missing so naturally you're going to want to find her. Remember to check upstairs for a Teddy Bear. These stuffed bears will sometimes take hits in your place, potentially saving your life.

Head over to Burglin Park and buy a For Sale Sign and a Copper Bracelet. The For Sale Sign can be used to sell items without having to go to a department store. This is handy because that way you won't have to drop any items while out of town. If you aren't using it, you can always leave it with Escargo Express.

Head to the far left side of Burglin Park and a man will jump down from atop a small house. He calls himself Everdred and wants to fight.

Boss Battle: Everdred
Offense: 25, Defense: 35 Speed: 6, Guts: 10
HP: 182, PP: 0
Everdred has some strong attacks, but if you are at a high enough level he should be fairly easy. Use PSI Special twice to dwindle his life down. If he's not dead, either use PSI Special again or start bashing him until he falls. Keep your HP above 50 by eating food items or using PSI Lifeup. Everdred will sometimes steal food items from you.
Exp: 986, Money: $171, Item: Nothing

There are two inventors residing in Twoson. They call themselves the Orange Kid and the Apple Kid. You can choose to sponsor one or both of them for $200. The Orange Kid will give you a Suporma (Super Orange Machine) if you sponsor him, but that item is absolutely worthless, and it can be purchased for a lower price later. Instead, choose to sponsor the Apple Kid (you will have to in order to progress the game) and ignore the Orange Kid. The Apple Kid will also ask for some food, which you should give to him. If you do not wish to give him a food item, buy a condiment from Burglin Park for $2 or $3 which he'll accept. You will receive a Receiver Phone as a reward.

Head east through the cave and into Peaceful Rest Valley. If you are mushroomized on the way, there is a girl just outside the cave in the Valley who will buy the mushroom from your head. If you are having difficulty fighting the enemies, exit and re-enter the rooms in the cave to avoid enemies. If you find yourself doing this often, it might be a good idea to level up a bit more before heading on.

Head north in Valley until you reach a statue shaped like a pencil. Looks like you can't go any further so head back. When you get back to Twoson, Apple Kid will give you a call. Head back to his house and Orange Kid will tell you that Apple Kid is waiting for you at Burglin Park. He can be found in the southwest corner of the park, where he will give you the Pencil Eraser. Head to Peaceful Rest Valley again.