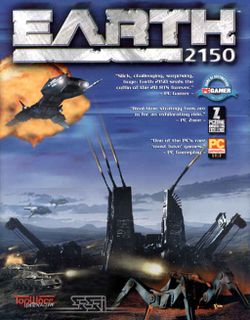 Earth 2150, also known as Earth 2150: Escape from the Blue Planet, is a real-time strategy game released by TopWare Interactive in 2000. It is one of the earliest RTS games that made a transition to a full 3D environment.

Some time after the events of Earth 2140, the Eurasian Dynasty attempted to use nuclear weapons on the polar icecap. While successful in disrupting the United Civilized States, it destabilized Earth's orbit, dooming the planet to destruction. The overall objective within the game is to collect sufficient resources to build a spacecraft and escape to Mars.