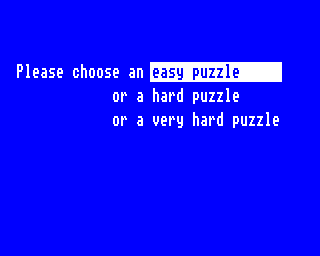 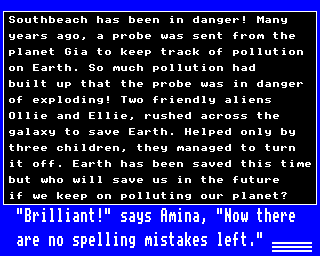 When you have pressed Space to continue for a minimum tenth, fourteenth or nineteenth time, a starfield shall appear at the top of the screen as both Ollie and Amina walk into view below it from the screen's left side, and both Jenny and Martin walk into view below it from the screen's right side; the text of "Your adventure is over now. 'Thank you for all your help', says Ollie. 'Remember to take good care of Planet Earth. It is the best one you know!'" shall then appear below all four of the characters. Once you've pressed Space to continue for a minimum eleventh, fifteenth or twentieth time, the text "The end" shall appear above the characters in alternating coloured letters (the letters will also change colour four times) - and if you'd pushed Y (for "yes") when the game asked if you wanted sound on the title screen, the Texas Instruments SN-76489 or !Maestro rendition of the opening bars for the serial's theme song shall then be heard for a second time, as both of the texts, the starfield and all four of the characters disappear pixel-by-pixel (but if you had pushed N for "no" when asked if you wanted sound on the title screen, the texts, starfield and characters will just disappear in silence). The game will then automatically return to the BBC Micro command prompt or whichever version of RISC OS your Archimedes is running (the latest version of that OS at the time the game was released was 3.19 but it ran on all subsequent versions until 3.71 in 1997); the Look and Read series also went on to continue on the RISC PC with Spywatch in 1996 and Captain Crimson in 1997, and eventually concluded on Windows with The Legend of the Lost Keys in 1998.